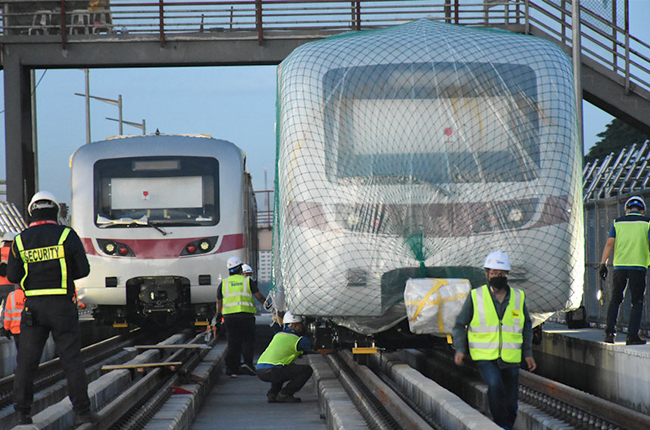 The San Miguel Corporation (SMC) was recently able to mount two more brand new Hyundai Rotem train sets on the MRT-7 line following the arrival of the first batch of trains from Korea last month. As a bit of a backgrounder, the first two train sets arrived last September and were mounted on the MRT-7 tracks located between University Avenue last October 23 and 24.

With the train sets slowly coming into the country, SMC states that it should be able to install 6 more out of the 36 train sets before 2021 comes to a close.

Work continues non-stop on the MRT-7 project, so we can meet our target start of operations by end of 2022. I’m glad to report that we’re on track to meet all the key milestones we expect this year.
Ramon S. Ang
SMC President

Related: This is your first look inside the new MRT-7 trains

Ang also continues by stating that “Our ongoing MRT-7 project and other existing and planned mass transport systems should remain the backbone of mobility solutions in the city but we need to integrate these with other sustainable means of moving around to truly address the immediate concerns of the metropolis and best meet the needs of everybody.”

He further states that “As work on the MRT-7 project progresses further and faster, we will be able to increase the number of train shipments from Korea in the coming months and mount these on the tracks later on for testing. In the meantime, we regularly inspect the trains in storage and are taking all necessary measures to properly maintain all train sets so they will be in tip-top shape once we are ready to test and operate.”

With work for the MRT-7 project already well underway, reportedly at the 56.03 percent mark, test runs for the railway are expected to be conducted on the 22nd of December of 2021. Despite the pandemic restrictions and pending right of way issues, progress is still moving along as construction for bored piles girders, and other foundational works are still going smoothly.

Once complete the MRT-7 line will reduce travel time from Quezon City to Bulacan to just 35 minutes from the several hours that it used to take. The new line will also come with 14 stations located in several key locations to help facilitate the flow of commuters.