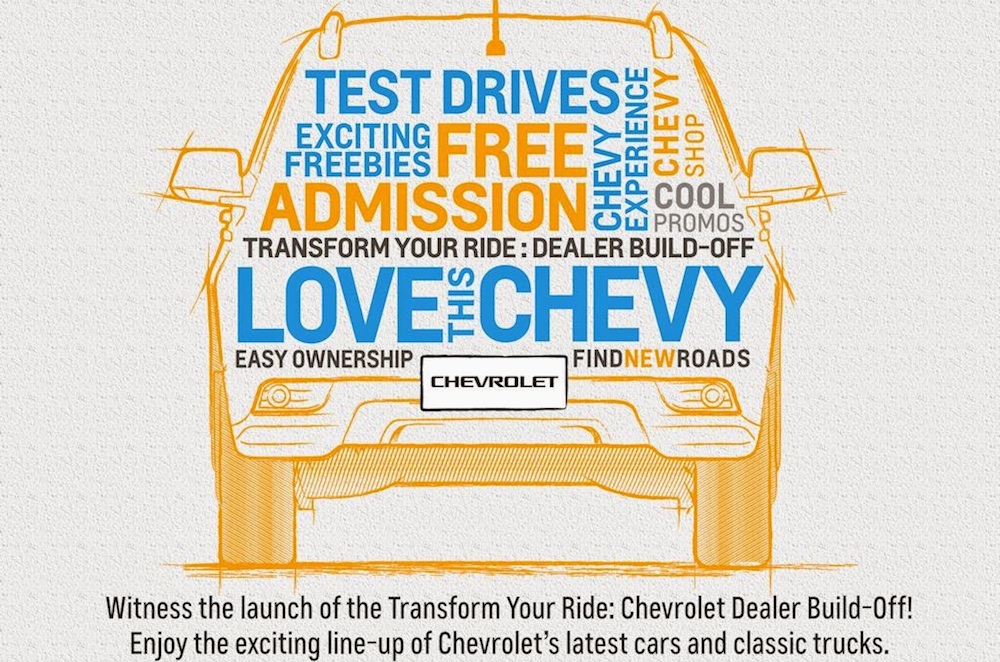 Just in time for the Holidays, this year’s Motorama will spotlight the latest in the American automotive icon’s line-up like the Chevy Spark, the Chevy Spin, the Chevy Malibu, the Chevy Colorado, and the Chevy Trailblazer. Not only those, but the event will also be showcasing the refreshed variants of the Chevy Captiva and the Chevy Sonic LS, and that, along with medleys of up-beat music, are just for starters!

As a way of fuelling that Chevy passion even stronger, this year’s Chevy Motorama will be graced by some of the American automaker’s legendary classics like the 1918 Chevy Light Delivery “Cowl Chassis”, which was the very first truck variant that Chevrolet has ever made. The 1955 Chevy Pickup will also be on display, representing Chevrolet’s advancement in automotive design and engineering. And of course, the event won’t be complete without the appearance of the brand’s most showbiz-oriented nameplate nowadays, the Chevy Camaro, which stars as the Autobot Bumblebee in the latest Transformers movie franchise.

the competition challenges the participating Chevy dealerships to pull out all the tricks off their sleeves and come up with an assembly of the wickedest and wildest “Transformed” (modded) Chevrolet vehicles.

Speaking of Transformers, transforming, and transformation, this year’s Chevy Motorama will also Spark up the first ever “Transform Your Ride: Chevrolet Dealer Build-Off”. Sounds massive?? Indeed it is, for this is actually an inter-dealership competition involving Chevrolet PH’s dealerships from Luzon, Visayas, Mindanao, and Metro Manila. Igniting the Filipino’s natural passion for car customization, the competition challenges the participating Chevy dealerships to pull out all the tricks off their sleeves and come up with an assembly of the wickedest and wildest “Transformed” (modded) Chevrolet vehicles.

These Chevy works of art will then be displayed and paraded during the entire Motorama weekend for the public to see. Coolest awards, trophies, cash prizes, and more are in store, including titles for the Best Sound Set-Up For Interior/Exterior Improvements, Best In Body Customs, Best In Paint, and Best In Engine Bay Modification. Attendees will also be given the chance to cast their votes for the competition’s People’s Choice Award, and to serve as a grand prize, an Overall Best In Show Award will be up for grabs.

Not just for show, the 2014 Chevrolet Motorama will also be the coolest time to own and drive home a Chevy. Available are great on-site sales deals and on-site car loan bank approvals at their best value, courtesy of the event partners PBCOM, BPI Family Savings Bank, and EastWest Bank. These include cash discounts, all-in down payment with FREE LTO Registration, 1-year comprehensive insurance and chattel mortgage, and more.

Finally, on-site buyers will be in for a grand treat, as a FREE round-trip ticket to the white sand beaches of Boracay will come as a reward for every Chevrolet unit booked during the entire Motorama 4-day event and delivered within the month of October 2014. This promo will be available for all the Chevrolet units, except the Chevy Spark.

Roll out to the SM Mall Of Asia’s Ice Skating Rink this coming October 9th to the 12th, and experience a one-of-a-kind automotive bliss that is the 2014 Chevrolet Motorama.