Is there hope for a replacement for the Expedition? Ford Philippines recently discontinued several products in its lineup which include the EcoSport, Transit, and Expedition. During a little press conference brunch with Michael Breen, the Managing Director of Ford Philippines, this question sprang from our colleagues in the media.

Carguide.ph asked whether the discontinuation of these product lines was to prepare the brand for another generation, and Breen’s reply to that question was safe yet vague at the same time.

“We’re confident and comfortable with the lineup that we have.”
Michael Breen
Managing Director, Ford Philippines Following the statement, he mentioned that Ford is also confident in our future lineup, which is a directly-indirect answer that is filled with either joy or sadness depending on how you look at it or how much you love the EcoSport, Transit, or Expedition. These three models do have a following in the country, but given the level of competition in each of the nameplates’ segments, it’s quite understandable why Ford decided to pull them out of the Philippine lineup. Though the removal of the Expedition was a little distressing to, at the very least, some of us at the office.

However, the other side of the coin may shed a little hope on the matter. See, the vagueness of the answer leaves more questions rather than answering the question. One can argue that the answer was well-thought, and Ford’s playing a little coy for now preparing itself to surprise the Philippines with the launch of a new Expedition, but there’s no substantial evidence apart from the update for the Expedition in the American market. However, that could be the case similar to what the brand sort of did with the F-150, a nameplate that is now sizably popular in the country. There was a time when the F-150 simply was not available in the Philippines, and when it came back, Ford Philippines was inundated with orders, even for the diesel variant.

So our question is, could there be a chance for the Expedition in the future? Perhaps? Perhaps not? An update in 2021 gave us hope that the new SUV was to come to the archipelago back then, but perhaps the sales of its predecessor didn’t speak volumes. Furthermore, Ford gave no concrete reason as to why the EcoSport was discontinued in the country, given that it was quite a popular model among consumers and one of the top choices in the segment. Meanwhile, the Transit is niche and the same can be said about the Expedition. Perhaps it has something to do with the competitors that have flooded the market plus the lack of units sold?

For the EcoSport, Ford had to contend with Chinese manufacturers that stepped up their game with price points that are quite hard to beat. MG, Changan, and Geely are gaining or have gained traction selling crossovers similar in size to the EcoSport, but Ford’s offering stacks up quite considerably, still. Perhaps the success of the Territory sparked something within the Blue Oval’s ranks? Perhaps a replacement is on the horizon?

Meanwhile, the new Toyota Land Cruiser 300 series is dominating the large SUV market, while Nissan has fielded the updated Patrol Royale. Ford’s Expedition is a little on the older side of the spectrum, but it still offers plenty of value given its price. Could it be that Ford’s not seeing any more potential in the segment or could it give the Expedition a break for now and see how the market interest grows or shrinks in the coming years?

That being said, there is hope for more models in the Philippines from Ford, but it’s unlikely that the recently-discontinued nameplates will resurface any time soon. This is not the first time that the brand has trimmed down and focused its lineup in the country, like with the discontinuation of the Fiesta and Focus in the Philippine market. Looking at the sales figures of Ford, however, there are clear favorites in the Philippines, two of which are the Ranger and the Territory, both of which contributed a large portion of the 4,634 unit sales in just the first quarter of this year. 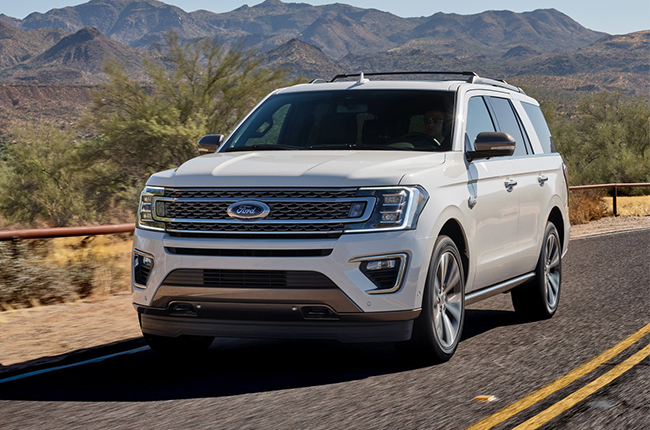 There is a clear demand for Ford vehicles in the midsize pickup and compact crossover segment for now, and sooner or later the Everest will get an update and likely make a splash in its corner of the woods. So the question is, what would it take for Ford to bring back the Expedition? A totally new model? Repressed interest over a period of time like the F-150? The Blue Oval has been quiet about the large SUV for quite some time, and it will likely continue to do so until further notice.