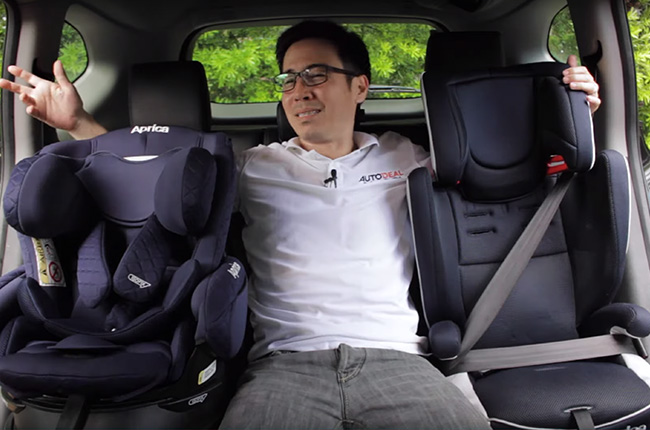 In lieu of the Child Safety in Motor Vehicles Act, many efforts were enacted by various agencies and offices to get these rules and regulations passed. If you’re not aware, a lot of the details are still being ironed out to ensure that the law and its implementation is as streamlined as possible.

With that said, it looks like child restraint systems (CRS) or colloquially called child car seats will soon be commonplace on Philippine roads.

We’re sure you have a lot of concerns about this law, so here is a list of frequently asked questions with clarifications following each set of inquiries: Even with CRS, why should the child 12 years old and below sit in the rear seat?

The law itself gets more detailed with the first point. There are certain exceptions to the 12-year-old rule. The draft stated that there is a minimum height requirement of 150 cm or 59 inches (4 feet 11 inches) for a child to be exempted. If the height requirement is reached, but not the age requirement, then it’s acceptable for the child to be secured via a seatbelt. At 13 years old, the child may be restrained by the vehicle’s regular seatbelts.

Can the child be left unaccompanied in the car while they are secured in a CRS?

The second question goes without saying, but suffocation in a car or any other related hazards must be avoided at all costs.

Will PUVs, taxis, and transport network vehicles be required to have CRS?

Is the use of CRS in privately owned motor vehicles mandated? What about those who take public transport? Does the law only protect the interest [of] those who can afford CRS?

People who take public transport will have to wait a little longer, as the DOTr is going to conduct its study in order to make an informed decision.

Can anyone buy just any kind of CRS?

With that being said, FAQ number six tackles the law’s coverage with regard to the quality of the CRS. There are certain standards that must be followed considering that the United Nations (UN) have their guidelines. The restraint system must be approved by the DTI and factors such as the adherence to UN Regulation 44 and 129 will be followed. Also, of note is the expiry date of the apparatus, which is a requirement in the United States, but this is still being discussed.

Related: 10 car seats for children you can buy in the Philippines

Who will be liable if law enforcers stop a motor vehicle because a child below 12 years old is not using a CRS, or is sitting in front?

FAQ number seven is just reiterating the point of safety inside a motor vehicle. A driver must do what he can in order to ensure the well-being of all occupants inside a vehicle, and this definitely extends to a child.

Are there exceptions to the rule on the child using the CRS at all times?

Lastly, the law recognizes some exceptions to the rule. Medical emergencies, with regard to physical injury, will be allowed since a restraint system may put extra stress on the body of a child in such situations. Mental health issues are also taken into consideration, and further guidelines will be divulged regarding this exception.

Republic Act no. 11229 is progressing with regards to its draft, and the final copy of the implementing rules and regulations is expected to be published by September 2019. Full enforcement will happen by September 2020, ideally. The act will hopefully be finished by August this year but will undergo some changes and clarifications before publishing.