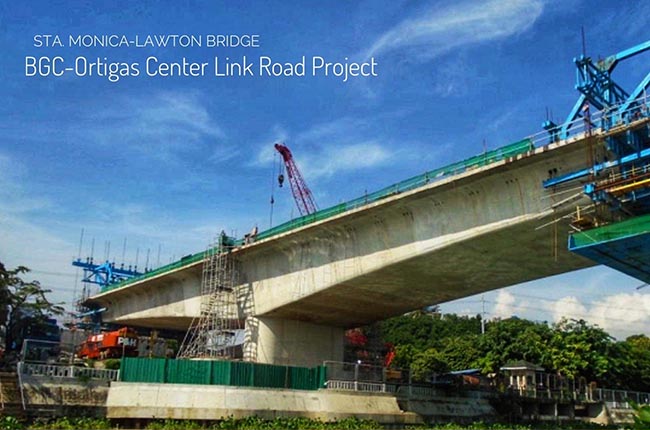 EDSA has been the bane of all who ply through it, thanks to its congested nature and hellish traffic. The Department of Public Works and Highways (DPWH) wants to help change that by alleviating the traffic through three key infrastructure projects. These projects have already been fast-tracked and should be completed by the end of 2020.

One of these three infrastructure projects is the Bonifacio Global City to Ortigas Center link road. Its goal is to reduce travel time between the two business centers to just 11 minutes. With the completion of the road, it is hoped that it will help decongest traffic from areas such as C-5 and EDSA. The project itself compromises of the Santa Monica-Lawton Bridge, the widening of Brixton to Fairlane Street, and the construction of the Lawton Avenue -Global City viaduct.

Another project that DPWH is working on is the Rockwell Bridge otherwise known as Estrella-Pantaleon Bridge. The original steel bridge is being replaced with a more permanent concrete structure that is designed to handle a higher capacity. This was done in order to serve more motorists and pedestrians. The bridge also serves as an important alternative route for residents in the Makati and Mandaluyong areas. When the bridge is completed it will have double the capacity of the original and will have four lanes with 3-meter wide pedestrian sidewalks.

Hoping to fix the traffic situation sooner rather than later, undersecretary Sadain has confirmed that he has secured the commitment of contracts and consultants to fast track the implementation in order to accelerate the completion of the bridges so that it may reach completion by the end of 2020. The addition of these new roadways and bridges will hopefully lessen the amount of traffic within Metro Manila.