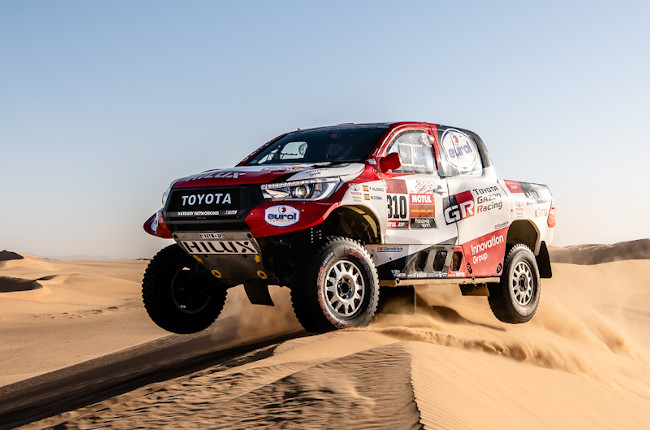 The rumor mill for the Toyota GR Hilux indicate that the normal 2.8-liter diesel engine will not be worthy enough for the ‘GR’ branding. However powerful Toyota’s current motor is, it will pale in comparison to what’s coming. With the brand’s participation in the Dakar Rally, a new engine with more cylinders and more displacement could make its way into the much-anticipated performance pickup. It could be likely that the racecar could be one of the bases for the new GR Hilux.

There is news of a new Land Cruiser coming, that much is certain. Several sources point to either a 2.8-liter diesel engine running the show for some markets, but hopefully the Philippines gets the V6 diesel that is reportedly going to the Australian market. Rumor has it that the Aussie-spec GR Hilux will be receiving the same turbodiesel V6, which will make it a strong contender against the Ford Ranger Raptor if it comes to the Philippines – fingers crossed.

Related: The next-generation Land Cruiser could get a 2.8L turbo diesel engine For the longest time, the V8 diesel as found in the outgoing Land Cruiser, was the Japanese brand’s only “big” diesel motor available. While still substantial, it is an ageing platform which will likely see replacement. As such, the new V6 motor will likely match or exceed the current output of the V8-diesel, 268 hp and 650 Nm of torque.

Now imagine that engine in the body of a Hilux. Power figures of the current model amount to 174 hp and 450 Nm of torque with the 2.8-liter 1GD-FTV. The motor is not as powerful or as torquey as the Ford Ranger Raptor. With its 2.0-liter Bi-turbo engine it produces 210 hp and 500 Nm of torque, surpassing most of the competition in the market. The GR branding also carries with it other performance gains apart from a more powerful engine. Toyota could also add some high-performance springs and shocks, give the truck a lift, as well as body kits and more features. If, and only if, the GR HIlux were to make it onto our shores with th V6 engine, it will most definitely be the next performance truck to beat.