Have you ever just gawked at a lifted vehicle and thought to yourself, ‘what a beast’? Mitsubishi wants to strike that same sense of awe and wonder into the hearts of all those who dare stare at this beast of a truck. An absolute unit by any definition of the phrase, the Triton Absolute takes the cake for beefiest and most capable looking 4x4 coming from Mitsubishi. The pumped-up version of the Triton, locally known as the 2019 Strada, is an off-road thoroughbred through and through, and its stance and musculature don’t match a well-paved road. 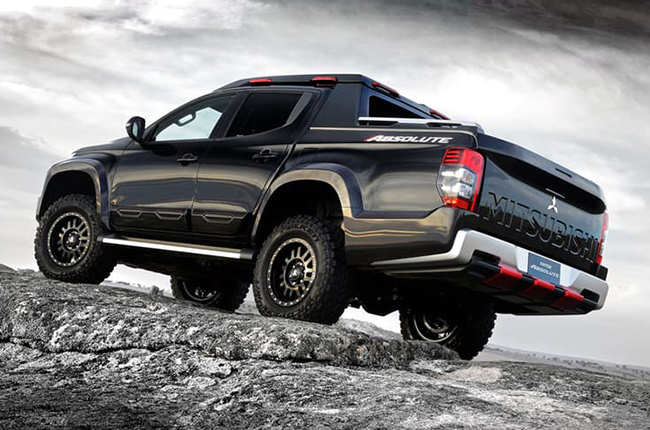 But what supplements did this monster of a truck take before it became as big and burly as it is in the photos? Just like a bodybuilder, Mitsubishi added many supplemental upgrades to the chassis of the current-generation Strada. To clear any form of debris on the trail, the truck is lifted 50mm higher than stock. Its stance is widened and broad, and it looks ready to conquer whatever form of gravel, mud, or sand that mother nature has laid out in front of it. Of course, the color scheme evokes a sense of fear, with black wheels wrapped in off-road tires, giving it a menacingly capable stature that towers over lesser Stradas. Aside from the wheels being black, it is also kitted with beadlocks that allow off-roaders to run their tires down to as low as 5 PSI to ensure maximum contact patch when climbing over rocks. Just like how a boxer strengthens his core to be able to take the mid-section punches of his opponents, the Absolute is outfitted with a front and rear skid plate that will ward off anything that is bold or big enough to target the truck’s soft underbelly. Similar to the Ranger Raptor, this special truck gets the wider to accommodate the wider suspension geometry and wider wheels and tires. The fenders give this pickup a menacing appearance and make its stock counterparts look scrawny in comparison. There is a roof mounted LED bar to illuminate the trail it has yet to decimate, and it also has an aerodynamic sports bar and rail that populates the sides of this tough vehicle. Go to the tailgate and a nice homage to old Mitsubishi trucks of old harkens to those who recognize the design language. The words Mitsubishi is debossed into the rear tailgate, a nod to the tradition of older generation pickups. A cute addition, if we do say so ourselves, but that is the only time we use ‘cute’ to describe the design of this big black truck.

The fit and finish of this concept from Mitsubishi can convince you that this is the competitor to the Ranger Raptor. Looks like the Japanese could be gearing up for another war of epic proportions, but this time with big and burly offroad trucks. The Triton Absolute was showcased in Australian soil to the media in the land down under. Mitsubishi seems to be gauging public interest for a beefed up version of its already capable truck. Time will tell if we will get this model, but we hope that the Ranger Raptor will get its rival soon though.