The pickup truck segment is being threatened by a new player—the taunting Ford Ranger Raptor is now in the Philippines. The perfect truck for those who think the Ranger isn't fearsome enough, this Raptorized Ranger features frame-mounted bumper and composite material fenders in black. The grille gives out the obvious with the enlarged Ford typography, as this is not your typical Ranger. Raptor, for Ford, is a badge given to trucks that are not to be messed with and the Ranger Raptor is the latest example on that.

The Ranger Raptor features a new coil-spring rear suspension that uses a Watt's link setup for better ride handling and greater lateral control. It also has a set of Fox shock absorbers for fun outside the paved roads. Under the hood is the 2.0-liter Biturbo diesel engine which gives out 210 hp and 500 Nm of torque. This is mated to a 10-speed automatic transmission that's borrowed from its bigger brother, the Ford F-150 Raptor.

Ford Motor Company has launched the first-ever Ranger Raptor in Thailand on February 2018. It's the smaller version of the Ford F-150 Raptor off-road performance vehicle, catered to markets where the Ranger is available.

On September 21, 2018, Ford Philippines brought in the Ranger Raptor together with the refreshed Ford Ranger. This also introduced Ford's Biturbo 2.0-liter EcoBlue diesel engine with a 10-speed automatic transmission. Even better, the Ranger Raptor came with an introductory price of P1,898,000.

Just like the Ford Ranger, the Ranger Raptor rides on Ford’s T6 platform that is shared with the Ford Everest. The Ranger Raptor is also a body-on-frame pickup truck that’s available with a four-door double cab body configuration only.

The Ranger Raptor is powered by a 2.0-liter Biturbo EcoBlue diesel mill that pushes out 210 hp and 500 Nm torque to all four wheels when in 4x4 mode. Transmission is taken care of by a 10-speed automatic transmission. It has coil-over rear suspension that uses a Watt's link setup, paired with Fox long-travel shock absorbers.

With a 2.0-liter Biturbo diesel engine in tow, the Ranger Raptor develops a hefty amount of torque as early as 1,750 RPM. This was more than enough for casual city strolls and highway runs alike, fed to the wheels in increments via a 10-speed automatic transmission.

Even with the relatively light steering, the Ranger Raptor is hard to maneuver in tight spaces. Out in the open, the performance pickup truck is composed and stable. It’s a different kind of animal off-road, however, and switching to Baja mode will surely satisfy your off-roading needs.

Beyond the aesthetics, the Ranger Raptor has a lot to offer in terms of tech and convenient features. These include power-adjustable seats, dual-zone climate control, automatic headlights, rain-sensing wipers, auto-dimming rearview mirror, speed-sensing door locks, parking sensors, keyless entry, and push-start ignition, and the 8-inch touchscreen infotainment system with Apple CarPlay, Android Auto, and a handy volume knob. There is also a reverse camera with a power-assisted tailgate that makes accessing the rear bed easy. All of these features work like a charm and without any qualm.

Aside from the screaming brand name up front, the Ford Ranger Raptor differs a lot from its normal siblings through a host of body kits and upgrades for it to become a legit off-road machine. Raptor-exclusive front and rear bumpers with skid plates and diffusers make getting dirty on rough terrains plausible, in combination with its 32.5º approach angle, 24º departure angle, and 24º break-over angle. The towering 283mm ground clearance employs a tall, authoritative posture. What isn’t seen on the surface, though, is the ultra-strength frame that makes this pickup truck a behemoth on unpaved paths.

The Ranger Raptor also has HID headlamps, LED daytime running lights, and LED fog lights to complement the machismo of its design.

The Ranger Raptor doesn’t deviate too far from its normal Ranger siblings in terms of interior build and quality. High-quality materials populate the cabin, including plush leather and soft-touch plastics, along with a few hard ones.

As the Ranger Raptor carries the same wheelbase as the Ranger, it has the same huge amount of interior space for a cozy trip. It also inherits the nifty 230V power socket for rear passengers and the non-existent rear A/C vents. Ford also updated the M.Y. 2020 Ranger Raptor and it now comes with autonomous braking pedestrian, protection, and updated LED headlights.

There are seven airbags inside the Ranger Raptor’s cabin, while hill start assist, electronic stability control with traction control, speed limiter, ABS with EBD, seatbelt reminders, and ISOFIX child seat anchors complete the set of safety features. Despite the heft of this pickup truck, the Ranger Raptor doesn’t come with blind spot monitors.

The Ford Ranger Raptor is yet to be tested by the ASEAN NCAP.

In our review, there are three things we love about the Ranger Raptor aside from its design—the Baja mode that brings out the adrenaline junkie in you, the tech features it comes with, and the plush materials you’ll find inside the cabin.

On the other hand, you might not like the fact that the Ranger Raptor is a tad hard to maneuver in tight spaces. It also doesn’t come with blind-spot monitors, which is kind of surprising, considering the size of this pickup truck. View the most compared cars versus the Ford Ranger Raptor 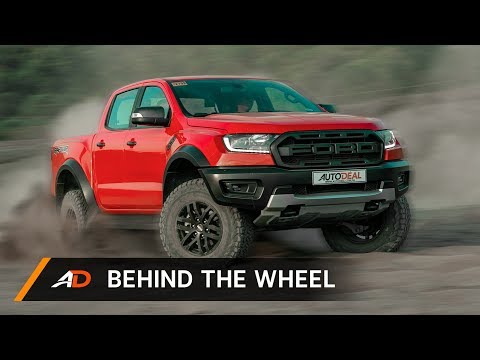 Read reviews from verified car buyers and find out from real owners what it's like to own Ford Ranger Raptor.

What's the wading capacity of the Ford Ranger Raptor?

With its increased ground clearance of 283mm, the Ford Ranger Raptor has a wading capacity of 850mm.

Does the Ford Ranger Raptor have Apple CarPlay and Android Auto?

For a pickup truck of this size, the Ford Ranger Raptor posted average fuel efficiency in our review. Amidst heavy traffic, it registered 8.3 km/L, while faster paces at around 60 km/h clocked in 12.1 km/L. Flat highway drives, with the cruise control nailed at 90 km/h, read back 15.3 km/L.

What colors are available for the Ford Ranger Raptor?

Is the Ford Ranger Raptor a diesel?

Yes, the sole variant of the Ford Ranger Raptor is powered by a Biturbo 2.0-liter EcoBlue diesel engine that produces 210 horsepower and 500 Newton-meter of torque.

How much is the new Ford Ranger Raptor?