When searching for a family car, the multi-purpose vehicle (MPV) segment is usually the first cars that pop up in the conversation for its variable seating capacity and its luggage space, all while being under P1-million. Well, mostly.

One of the choices in this segment is the Suzuki Ertiga and, luckily, the Japanese brand sent us a test unit so we can take it out for an in-depth review. Hopefully, this would help those who are in the market for a new family vehicle (like myself !) to narrow down their list.

Performance
Engine Output (HP), Acceleration, Transmission, Handling 3.0/5
Design
Exterior & Interior Design, Quality, Fit and Finish, Ergonomics 3.5/5
Ride Comfort
Cabin Comfort, Suspension, NVH Insulation 4.0/5
Safety and Technology
Convenience Technologies, Active and Passive Safety Features 3.5/5
Value for Money
Amount of the vehicle you get for the price, Fuel Efficiency 4.0/5
What You Will Like
What You Won't Like
How We Do Our Reviews Comparing it to its rivals, the Ertiga has a simple yet stylish look, showered with just the right amount of chrome. What I like about its appearance is the character lines and the front fascia that bear similarities to its sporty subcompact hatchback brother, the Swift, thus resulting to its youthful vibe despite being an MPV.

I also liked how its rear doesn’t look like it was chopped off. It has subtle curves, a large rear window, and enough chrome to give it a classy finish. 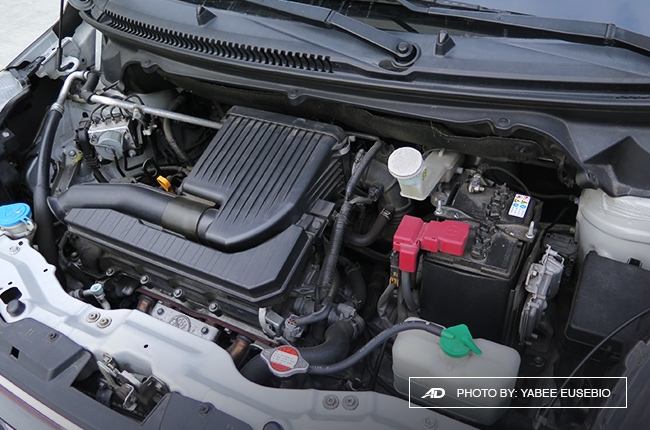 Under the hood, this MPV has a 1.4L gasoline engine that produces 95 hp and 130 Nm of torque. Be it the power-to-weight ratio, its dated 4-speed automatic transmission, or because it could be just simply underpowered, the Ertiga does take up some time to get up to speed. Unless you step on the pedal more often, which results to more fuel consumption.

Yes, the Ertiga isn’t a sports car, but having that extra grunt at high speeds would be nice, let’s say, for overtaking. On the other hand, this MPV has brakes with powerful stopping power, which gave us an added sense of confidence in the car.

With how its engine behaved, this variant consumed 11.6 km/l at an average speed of 90 kph on South Luzon Expressway (SLEX). Not as fuel efficient as I hoped it would be on the open road, but it did redeem itself by putting up 8.9 km/l on the busy city streets, making it a good choice for those who do daily groceries or school runs.

Meanwhile, its power steering feels a bit numb for my liking, especially while on the highway. I feel disconnected from the road that I frequently correct the steering wheel angle to keep the Ertiga straight in its lane. In addition, its sloping hood does make it a bit hard to see the front corners of this MPV.

Although the Ertiga does fall short in terms of performance, it manages to bounce back with its ride comfort and its interior amenities.

I like how its MacPherson and torsion beam (both with coil springs) dampened each shock from the bumps and humps along the road. Meanwhile, its ride height and the stiffness of its suspension are set-up just right that I don't feel as much body roll as I expected (at the correct speed of course). 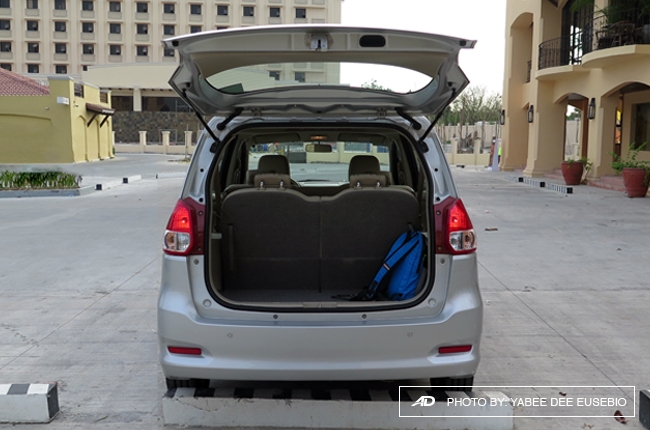 As for its luggage space, the rear offers just 135L worth of cargo space with an upright third row, which translates to just a few bags of groceries, the children’s school bags, or probably the size of a baby’s stroller. But, that's normal for an MPV of this size.

You can fold down the third row seats to expand its luggage area to 736L, but this can be a problem if you have a car full of passengers. In addition, the rear door doesn’t go high enough that my 5’9” frame needs to slouch under just to load/unload items. The Ertiga’s seven seats can be folded to a variety of configurations to fit your needs. It also has ample leg and shoulder room for its second row seats – thanks to its long 2,740mm wheelbase and 1,695 mm width. The seats can be adjusted according to the passenger’s preference and/or to allow more legroom for its cramped third row, while ingress and egress at the rear is easy with its large, accessible lever that folds the second row seats down.

I also appreciate its large door frames that allows me to easily load stuff at the second row without having to bend too much or hit my head on the pillars.

The cabin of this particular Ertiga variant is clad with light brown and grey plastic panels, while its seats are wrapped in fabric covers. Sure, it’s not the most elegant interior but it does grow on you eventually. You’ll also have to consider that despite it being the top-of-the-line, it’s still a sub P1-million MPV.

This family hauler has an impressive manual air conditioning system with rear blowers than can easily cool down cabin temperature even if the vehicle has been parked under the sun for a long time. For entertainment, the Ertiga features a four-speaker Android head unit with Bluetooth connectivity that can be managed via steering wheel audio controls. It also has online navigation for those who have trouble with directions. These features are definitely a plus especially if you have children with you since you don’t have to take your eyes of the road. However, charging multiple devices can be a problem as the Ertiga only has one USB port.

On a side note, I think it would’ve been better if the Ertiga came with ISOFIX child seat anchors as parents would certainly like an additional blanket of safety for their children. 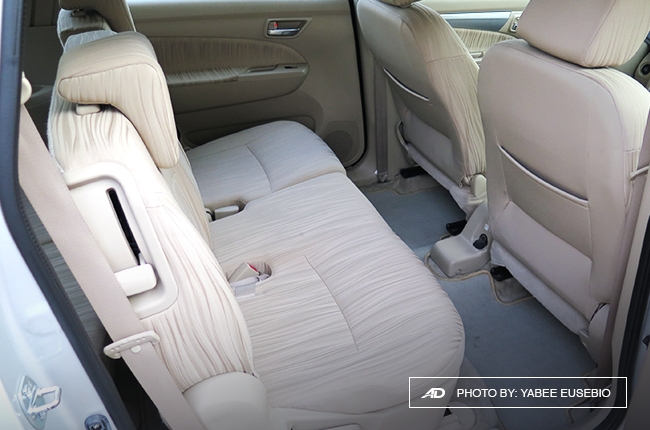 Hands down, the Suzuki Ertiga is a good MPV. I really liked its youthful yet stylish exterior looks, its ride comfort, and above par interior amenities. Although the materials used in the cabin are a bit of a let down, we can’t forget that this is the most affordable top-of-the-line MPV in the market today at just P928,000. And for me, this is the recipe for a practical family hauler.