The people mover segment of the car industry is filled with multiple options to choose from. You have options from mainstream manufacturers such as Nissan and Toyota which all have vans that easily address the need to shuttle people around, and you also have manufacturers such as Isuzu that have used their light-duty trucks to answer this call.

Then you have new entries into the segment with Maxus Philippines and the Maxus V80 which seeks to change our perception of what you can get from a people mover in terms of space and comfort. With that in mind, we will take a look at and review the V80 Comfort to see how it will stack up against the rest of its competitors and to see if it's worth getting.

Performance
Engine Output (HP), Acceleration, Transmission, Handling 3.5/5
Design
Exterior & Interior Design, Quality, Fit and Finish, Ergonomics 3.5/5
Ride Comfort
Cabin Comfort, Suspension, NVH Insulation 4.0/5
Safety and Technology
Convenience Technologies, Active and Passive Safety Features 3.5/5
Value for Money
Amount of the vehicle you get for the price, Fuel Efficiency 4.0/5
What You Will Like
What You Won't Like
How We Do Our Reviews The Maxus V80 comes with typical van-like styling, it's a huge rectangle at the back paired with a short nose at the front. It comes with large halogen headlights at the front which are paired with LED daytime running lights. It also comes with large side mirrors which can be electrically adjusted from inside the vehicle. It also comes with blindspot mirrors which can aid you when parallel parking. Aside from this it also has a massive functional grille that helps cool the engine.

Moving on to the side of the V80 and you are greeted by a sliding door only on the right side, 16-inch alloy wheels, and an electric step board. At the back, you get two large doors that swing outward and a set of vertical bulb-type taillights. You also do get a rear foglight and a third brake light as well. Keeping in mind that the V80 is a commercial vehicle, the interior works well to give you a robust interior that can handle the rigors of use. While it is predominantly gray and there are a few soft-touch materials here and there, you can tell at a glance that everything was meant to last and be operated with gloves on. The switches are large and chunky and everything is easily within reach of the driver and front passenger except for the hood release which is oddly placed on the right side of the vehicle.

Regardless, the interior meets the industry standard for a transporter-type vehicle as the cabin is spacious and there is room to move around thanks to the relatively high roof. This makes it easier for passengers to shuffle about inside and get comfortable thanks to the large windows on either side of the vehicle. One thing we do have to note is that the rubber on the shifter became sticky after the van was parked outside, while it aided with grip, it provided a rather odd experience each time you would need to shift a gear. 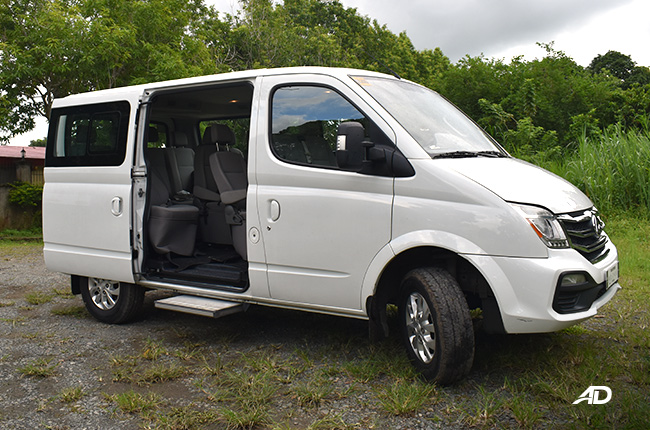 The Maxus V80 Comfort lives up to its name as the passenger seats deliver a comfortable experience. The padding is nice and supportive and the seats can be reclined to give you a better experience. The air conditioning is also nice and cold and can easily keep the cabin cool without too much fuss. The suspension also keeps the bumps at bay but you can tell is geared towards a stiffer setting to handle the full weight of 13 people.

One thing we did notice was that it was a bit difficult to find the proper seating position for the driver especially if they were on the shorter side. The driver’s seat does not have a high adjust feature but it does have a tilt feature that helps elevate your seating position just a little bit. It presents a trade-off as you will have to sacrifice height over fully being able to depress the pedals for shorter drivers. When it comes to taller drivers, however, the problem isn’t as noticeable, we do wish that Maxus added a tilt and telescopic steering column to the vehicle to make it easier to drive. As the Maxus V80 is technically a commercial vehicle, it doesn’t come with much in terms of safety features. It comes standard with ABS with EBD, rear parking sensors, 3-point seatbelts for the front passengers, and 2-point seatbelts for the rear seats. It also comes with driver and front passenger airbags and an immobilizer as well. We wish that it did come with a bit more safety features, but as the vehicle was meant to be a shuttle, we really can’t complain and understand why Maxus went with this configuration. There isn’t much in the way of technology for the Maxus V80 as it only comes with a proprietary radio that comes with USB, Bluetooth, and Aux-In connectivity. The Bluetooth feature is something we appreciate about the vehicle as it lets you play your music or lets you stream Waze or Google Maps directions from the four-speaker sound system. Aside from this the V80 also comes with an electric doorstep which makes it easier to get in and out of the van. If you know how to drive a manual vehicle, then driving the Maxus V80 is a piece of cake, you get used to the size of the vehicle fairly quickly and the large mirrors on either side aid you well with maneuvering the rather large van.

Power delivery is smooth and you can feel the van wanting to pull even further once you reach the higher portion of the rev range. One thing we did notice is that the van likes to stay within the lower part of the rev range where it is most fuel-efficient and right under boost. This lets you confidently short shift without too much hassle as torque is plentiful.

We did notice that the car had cooling issues. The temperature gauge went over half when we took the V80 to Tagaytay after it came off the highway. While we don’t know the exact causes of this, we theorize that it was due to an oil cooling issue with the unit. To remedy this we turned off the air conditioning for a bit and stayed under boost so that the engine could cool down.

One downside with the V80 is that the van doesn’t give you too much of a warning when it is about to stall. Typically a vehicle will shudder when the engine is about to stall out, in the case of the V80, it just dies immediately. There are times when you think you will be able to crawl in second gear and find yourself with a dead engine instead. To remedy this, you will need to adjust your mindset a bit with the vehicle and note that even at 10km/h it's better to shift it into first gear rather than stay in second and hope it pulls. Conversely, you can also try to play around with the clutch and feather it so you can maintain second gear.

As previously mentioned, getting into the right driving position can be hard, especially for shorter people and the placement of the horn buttons can also make you accidentally honk at people without intending to do so. This can be remedied by shifting to a shuffling style of steering instead of the typical hand-over-hand style. Under the hood, the Maxus V80 comes powered by a 2.5-liter turbo diesel engine. It pushes out 134hp and 330 Nm of torque which is sent to the front wheels via a 6-speed manual transmission. With this combination and the sheer size of the van we were able to eke out 7km/L in the city while staying under boost, and 14km/L on the highway at an average speed of 80km/h. Take note that these are estimated numbers as the V80 doesn’t with a fuel economy meter as standard.

Overall these are decent figures considering that the van is tall and wide and has a less than favorable aerodynamic shape. We were able to get around 550 kilometers worth of range from the 80-liter fuel tank with mixed-use. The Maxus V80 Comfort is priced at P1,670,000 which is a tall ask especially as it puts it in contention against the likes of the Nissan NV350 AT and the Toyota Hiace. Since it's only available with a manual transmission, it can be a bit of a big ask from a person looking to use it as their family vehicle. However, if you shift your view to that of a person or company looking for a good shuttle-type vehicle, then this is where the V80 shines.

For quick trips and the occasional long-distance haul, the V80 is great. It may be rough around the edges for someone looking at it as a family vehicle, but as a shuttle, there is nothing to complain about with the van. It works well provided that the oil is changed out regularly and maintenance is easy as everything is within reach once you pop the hood. Overall it's a well-balanced van for those looking for a comfortable van to move people around.