Ford Philippines today is known for its big cars. I’ve been able to drive smaller “big” models like the EcoSport, as well as really large ones such as the Expedition, but none of those cars were as long or as spacious as this minibus, the Ford Transit 15-seater.

It’s bigger than a full-size van with interior space tall enough for someone 5 foot 8 inches in height to stand up straight. There is a lot of ground, sheet metal, foam, and interior carpeting to cover, so let’s dive in real quick. There isn’t much you can do when it comes to designing a box, but Ford has found some form of dark magic because the Transit doesn’t look half bad. The front is more elongated and juts out a bit more than your usual minibus. It has a hood and a utilitarian, but a rather attractive grille that is shared with the rest of Ford’s big rigs.

The side and rear are not that visually interesting, however. Granted there are a few character lines splattered all throughout the body, but none of them have a wonky angle or anything. The lines here are safe, as it should be because presentability without stirring emotions is a trait that the Transit has in droves. 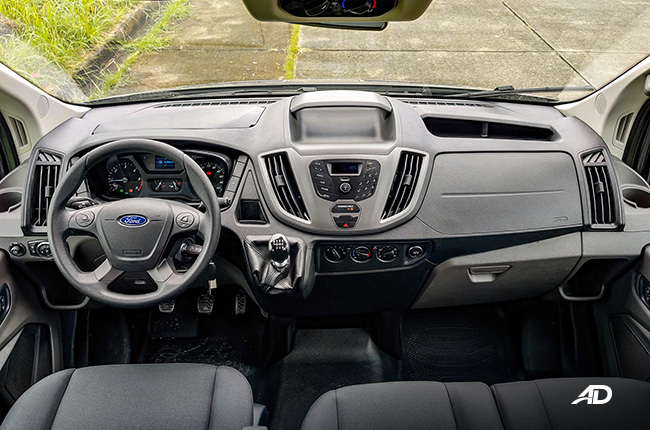 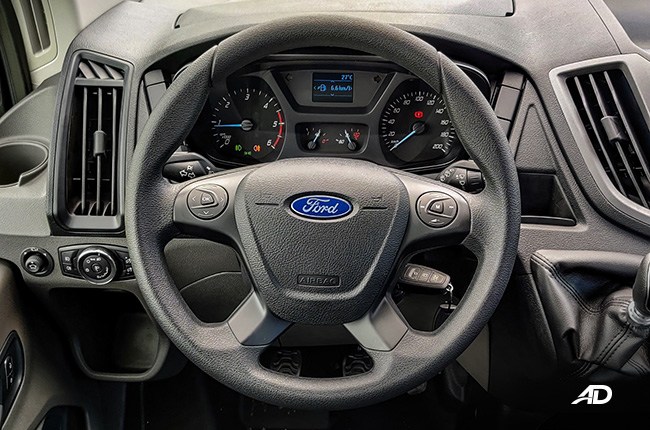 Stepping into the driver’s seat of the Transit, and you are greeted with utilitarian simplicity. Everything from the trip computer, to the gauges, and the interior plastics are all geared towards longevity and non-complexity. It’s as simple as it gets, really. While it’s styled minimally, the dashboard has a lot of storage spaces all around. 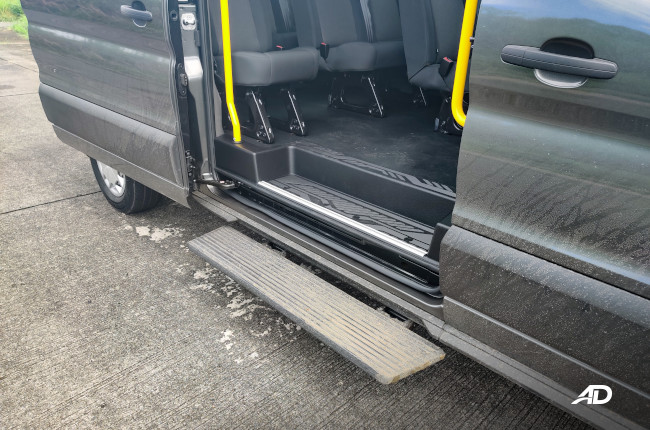 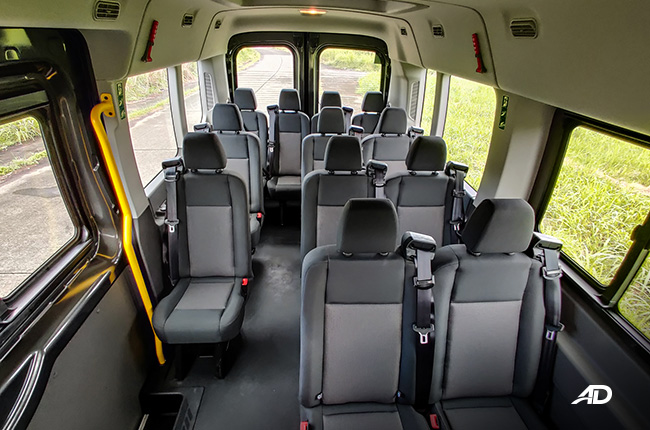 Stepping into the cabin, you get a deployable step board, as well as bright yellow grab handles on both sides to make ingress and egress easy as can be. The rear is where you want to be in this car because front seats, though ample, don’t have as much legroom as the passenger area. The seats are comfortable and reasonably supportive, and the foam Ford used has a spongy feel which is firm yet has enough softness to cradle you. For the tech inside the Transit, there are only a few toys to play with. After all, it is a commuter van. You do have a radio that has AUX, USB, and Bluetooth connectivity options. There is also a European power outlet at the base of the handbrake, as well as two 12V sockets in the front, and one in the back. Infotainment is enough for most, and the Bluetooth connectivity is adequate; even through a tortured LCD user interface. You do get steering wheel-mounted audio controls, which is a good addition. Since it is long, you will need to monitor your sides and rear, you can accomplish this thanks to the large mirrors, and the backup camera that outputs to the rearview mirror – which is an odd place, but acceptable given the head unit. The gauges are utilitarian and simple but have that Ford look that we’ve been accustomed to for so long. The trip computer is also a simple LCD display, which is adequate. A remarkable piece of technology is the VDO Tachograph machine. This device allows drivers to register and print out their telemetry data from their trips. It’s a bit of a throwback that has a retro appeal to it. Pertinent data like average speed can be read through here, which will help owners monitor their usage, or how their vehicle is being used by designated drivers. 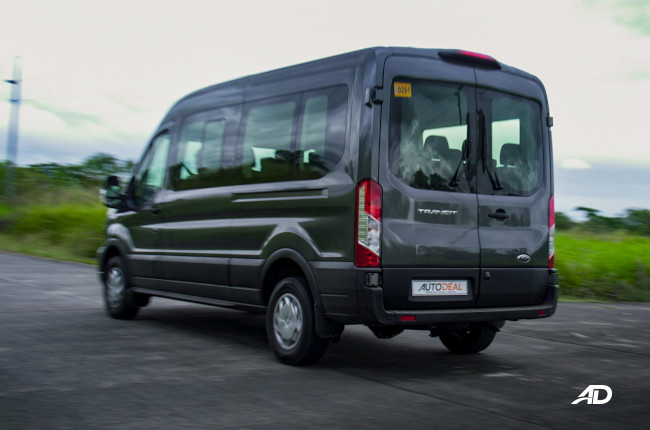 After driving a couple of minibusses with heavy clutches and truck-like handling in the city, I can say that the Transit has the beloved Ford lightness. The controls of this vehicle aren’t heavy, so much so that a scrawny guy like me can pilot this behemoth without breaking a sweat. Steering is light for a car of this size. The seating position, while truck-like, comfortable because of the wheel’s ability to tilt and telescope. Body roll is definitely a quirk you need to control with this class of vehicle, but it never felt like the Transit was rolling on stilts. 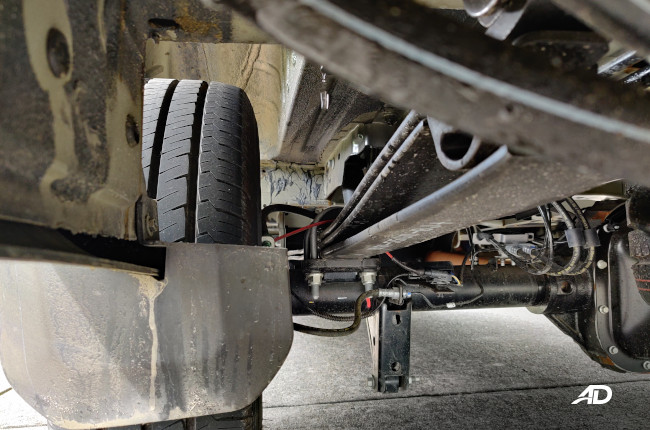 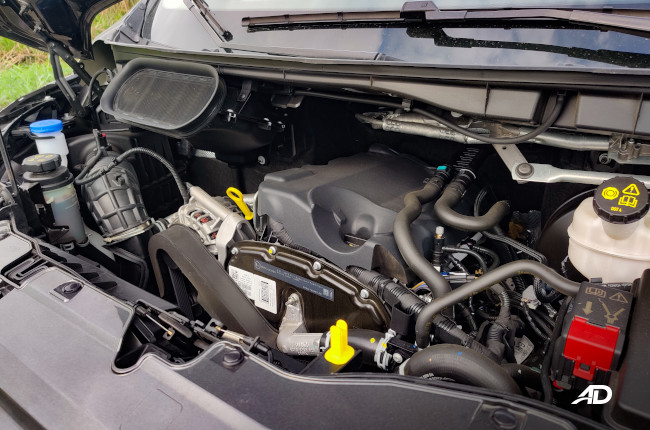 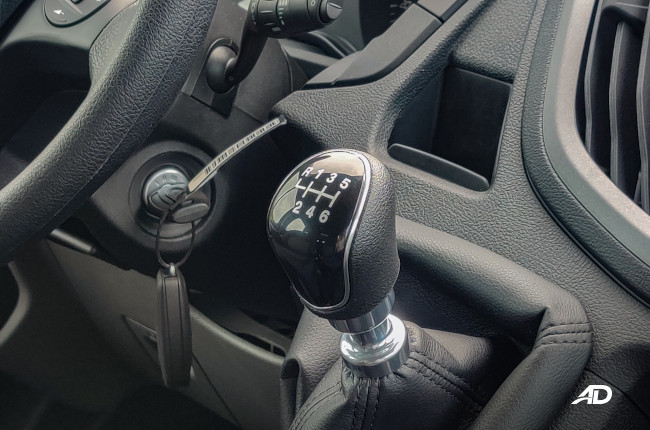 Acceleration is acceptable for its size and unencumbered weight. It does have the base Ranger’s 2.2L diesel engine, which finds itself bolted onto a chassis that is significantly heavier than either PPV so, with more cargo or occupants, the vehicle could find itself slugging along trying to gain speed. While the engine itself isn’t that potent, it gets the job done so I can’t really complain too much. Shifts were smooth, and the clutch was surprisingly light. Noise vibration and harshness were very acceptable, while bumps and potholes were absorbed fairly well. 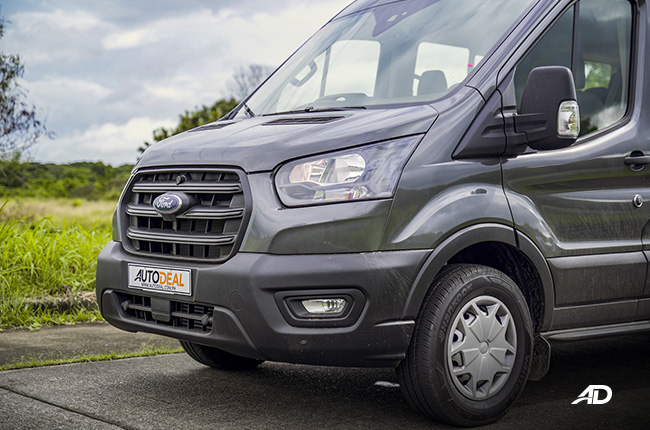 We were only given a few hours with the new vehicle from Ford, and I was able to sit in all 15 seats and drive it around for a bit, and overall it seems like a well-built minibus. The engine could use a bit more pep in case you need to haul heavier loads, but other than that, it’s presentable and easy to drive which are two traits that I would weigh prioritize as a driver of a car such as this.

As a passenger, the amenities in the back are a bit lacking. Space is really the headlining feature here. There is enough space for passengers to feel like they’re not trapped in a box. The only soul that might need to squirm a bit will be the one in the middle of the driver and front passenger, but that’s par for the course. The vehicle comes at a price of P2,300,000 which warrants a closer and longer test to find out if it’s worth it or not. That being said, I can’t wait to get this vehicle for an in-depth review. 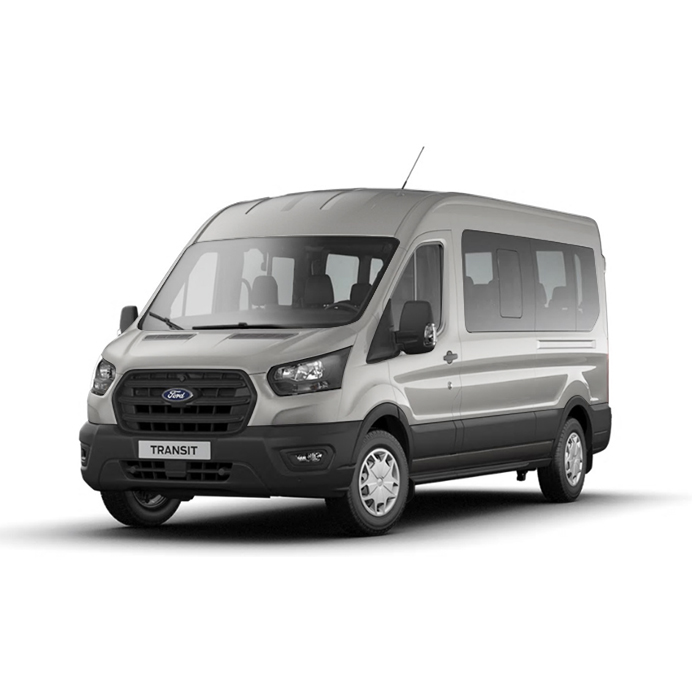