When Mazda announced its new stand as a premium brand, I couldn’t help but see that as a ballsy move. The small-scale yet mainstream automaker isn’t a volume-seller – at least when compared to global automotive giants – and the move to go premium is like a double-edged sword that could work for or against the brand.

Then again, with a vehicle lineup that has been getting raves from reviewers all over the world, Mazda has proven that it has the biggest balls on the planet. This one, the Mazda3 Sportback is the forefront of that offensive to cross the upscale territory, but is it a futile attempt? I got my hands on the media tester of the Mazda3 Sportback 2.0 Premium and here are my thoughts.

Performance
Engine Output (HP), Acceleration, Transmission, Handling 4.0/5
Design
Exterior & Interior Design, Quality, Fit and Finish, Ergonomics 4.5/5
Ride Comfort
Cabin Comfort, Suspension, NVH Insulation 4.5/5
Safety and Technology
Convenience Technologies, Active and Passive Safety Features 4.5/5
Value for Money
Amount of the vehicle you get for the price, Fuel Efficiency 4.5/5
What You Will Like
What You Won't Like
How We Do Our Reviews Let’s get this out of the way first – Sportback is the new hatchback for Mazda. In its bid to go premium, the company now uses this monicker for its compact hatchback, a name mostly used by premium brands.

It’s safe to say that Mazda always goes against the trend. That reflected on the all-new Mazda3’s revamped styling. While other brands unleashed their design prowess in making their cars more aggressive than ever, Mazda took a different route by taming its Kodo design language and giving the compact car a more subdued, minimalistic styling. It retains the curves of its predecessors but this time around, the subtler lines give the ‘3’ a sultrier appeal – save for the rear-end’s bulky C-pillar that can be vaguely polarizing. I, for one, hated the heft of its butt, but it grew on me with time. However, this particular unit’s Polymetal Gray color amplifies my adoration with the Mazda3 Sportback, which is endemic to this body type. Its bluish and flat hue greatly differs from other gray-colored cars on the road, adding to the head-turning appeal of the car. In combination with the full LED affair, the Mazda3 Sportback looks good at night as it is in broad daylight.

By the way, if you’re looking for fog lights, there aren’t any as the LED adaptive front lighting system already covers those areas that fog lights illuminate, eliminating the need for one. 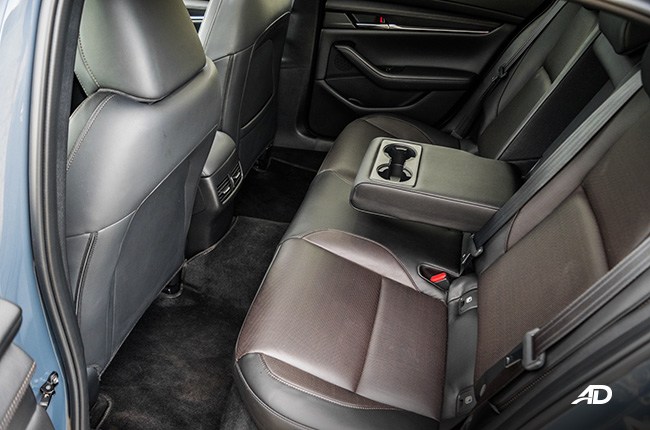 The Mazda3’s cabin represents the brand’s intention to go premium. From the placement of buttons down to the littlest details like the use of white LED pin lights and frameless rearview mirror, the feeling while seated inside the Mazda3 Sportback is akin to when I was testing a premium car. Even the tune produced when using the turn signals sounds premium. I particularly love the soft leather that covers most of the interior, plus the subtle yet effective brown stitches break the rather stale, dark cabin. The company has carefully curated the usage of materials to emanate a plush feeling and satisfy each of the occupant’s senses (except for taste, of course).

There’s one caveat, though. The shiny plastics that populate the center console and door cards scratch easily. In fact, the 2,561-km-old media tester already has several scratches on these parts so if you’re to buy this car, you really need to be careful in moving your stuff inside.

Trunk volume isn’t listed but during my test, I was able to squeeze in a standard two-fold stroller and a month’s worth of groceries without having to fold the rear seats for expansion. It was a tight fit, though. 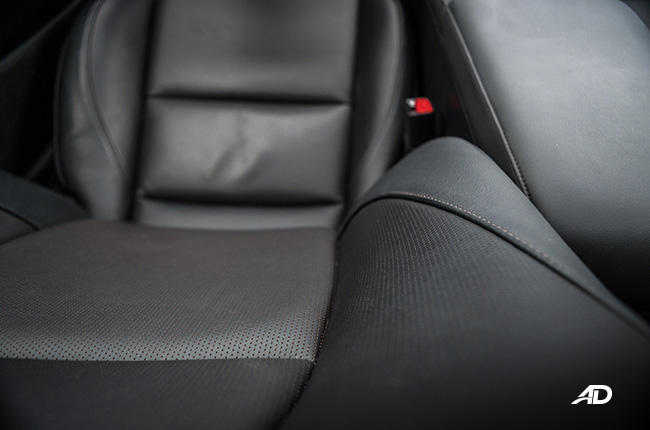 The all-new Mazda3 Sportback’s upscale cabin is partnered with a comfortable ride. The suspension’s set up to absorb road imperfections without being felt by the occupants and without muting road feedback. Mazda also did a great job of installing noise-deadening materials to complement the car’s commendable ride quality. Even at high speeds, the sound from the 12-speaker Bose sound system works well in drowning unwanted sound waves out of the cabin. Plus, dives and dips are minimal, adding more points to ride comfort.

It could have been all aces for the Mazda3 in terms of ride comfort if not for the limited space at the rear. At my height (5’6”), leg- and head-room are just alright but even so, it already felt queasy and claustrophobic because of the small rear windows. That feeling will amplify exponentially for taller individuals. Lastly, elbowroom’s good for two adults but it can be really tight for three, especially with the tall tunnel running down the center.

As for the driver, it’s easy to find a comfortable driving position with the multitude of adjustments available. I drove the car for three hours during the November exodus and I didn’t feel any pain at all. Mazda pulled all the stops in filling every corner of this range-topping Premium variant’s spec sheet. Everything’s power-assisted, while the driver’s seat has 10-way electronic adjustments with a two-slot memory function. And, since I love tech features in a car, the radar-based adaptive cruise control is definitely a huge plus. This variant also comes with a 360-degree view camera that has a high-resolution display – probably the clearest I’ve seen in the cars I’ve tested, premium cars included. Even better, the cameras activate the moment the sensors, err, sense something in proximity, which I think is quite logical and useful for daily drives.

The crown of the cabin is the 8.8-inch infotainment system that’s positioned deep into the dashboard. It doesn’t have a touchscreen function and there’s a good reason for that – safety. The lack of touchscreen eliminates distraction while going through the menus while driving. Nevertheless, the commander knob wasn’t alienating at all, even when using Apple CarPlay, plus the intuitive menus were easy to fiddle with. 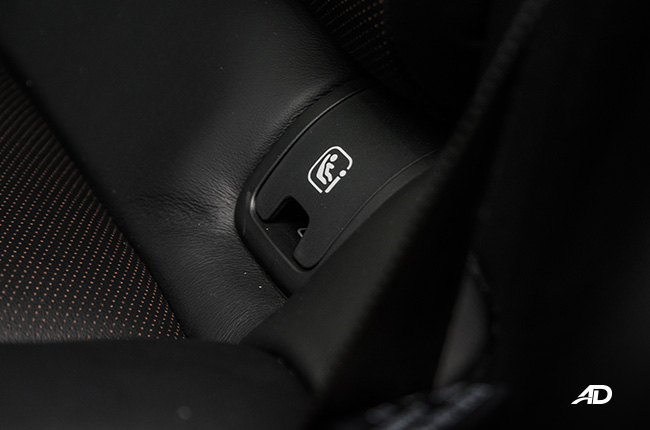 All of these mentioned features come on top of passive safety toys like seven airbags, ABS with EBD, stability control, ISOFIX child seat tethers, seatbelt reminders for all occupants, and pedal misuse alert. 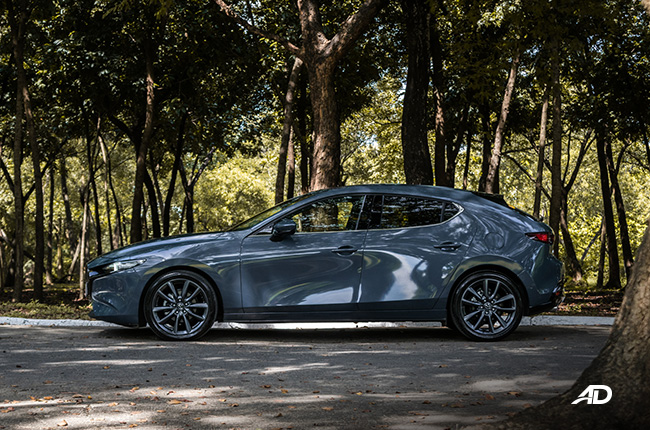 A naturally-aspirated 2.0-liter gasoline engine resides inside the Mazda3 Sportback Premium’s hood, which is good for 152 hp and 200 Nm of twists. These numbers aren’t the highest in its class, mind you, but they’re enough for the car’s weight and didn’t feel lacking at all. Mazda has done a good job of employing a 6-speed conventional automatic gearbox that wasn’t lazy to shift gears at will. The gearbox was always ready to receive throttle commands and executed them well. The car does come with manual shifting through the lever or through the paddle shifters but I didn’t feel the need to use them during daily use.

Another thing to rave about the Mazda3 was its handling. Everything's cohesive and balanced. The steering’s nicely weighted and had great feedback, which made for an engaging drive on different road types. The G-Vectoring Plus feature wasn’t just an engineering blabber – you can actually feel its effect when tackling winding roads at speeds. Sure, driving visibility was a bit impeded when seated really low but not to the point of feeling unsafe. Besides, remember the cameras? They were very useful especially when backing down and maneuvering in tight spaces. 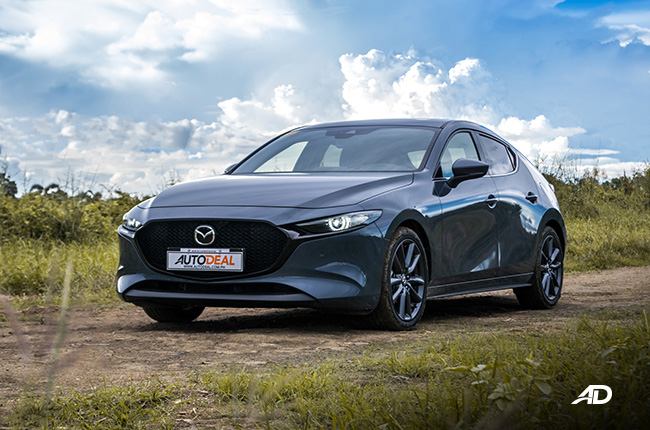 With the mentioned driving traits of the Mazda3 Sportback, it returned notable fuel economy numbers on fast drives but a bit dismal on slow city traffic.

Of note, these numbers were taken with only one person on board. When Mazda announced its transcendence into the premium territory, it was met with high brows and criticisms. It’s like when Michael Jordan joined the Minor League Baseball in 1994. Only this time, the Japanese automaker isn’t hopeless and out of place. Sorry, M.J.

Now, I know that P1,510,000 for a compact sedan may sound too much – but not with the Mazda3 Sportback Premium and its slew of tech toys, high-quality materials, and commendable driving dynamics. At that price, you actually get what you paid for. Its premium-ness is best experienced by actually being in the car, and that presents a great value for your money. Imagine getting a premium-quality car at a lower price.

Thinking about it, the all-new Mazda3 is like your ultimate crush who you’re gushing too much for. You might think she’s out of your league but once you get to know her better, you’ll learn that she’s worth every shot. 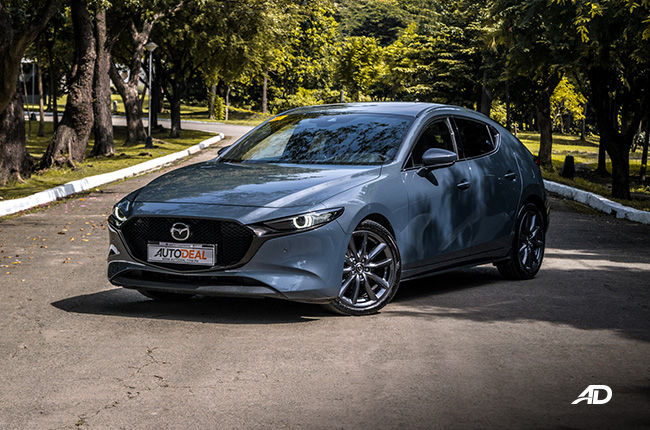 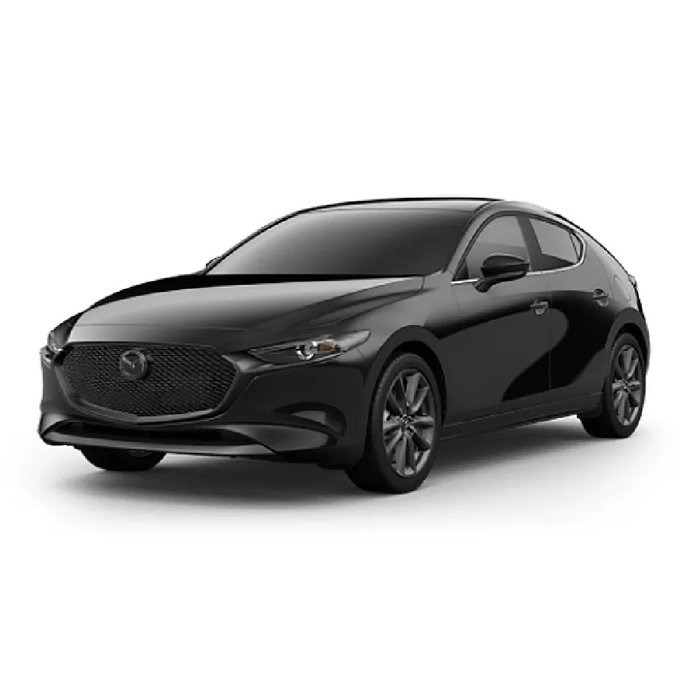 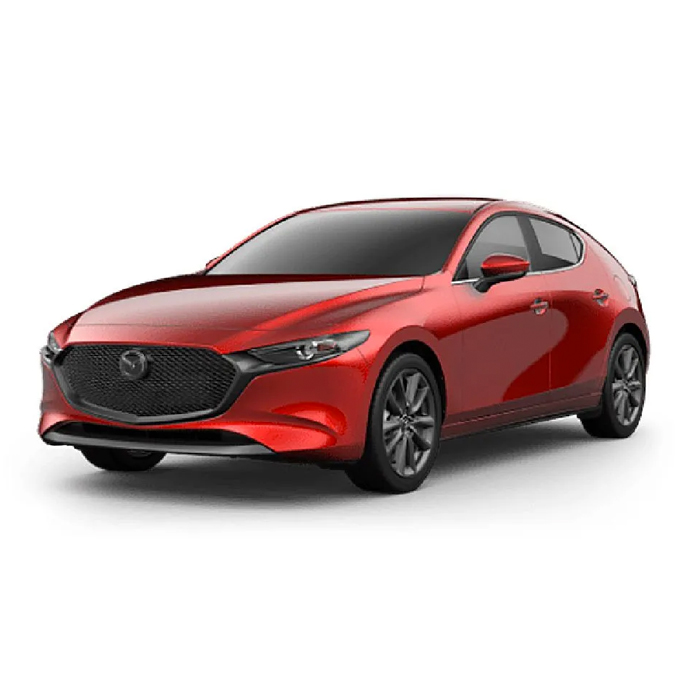