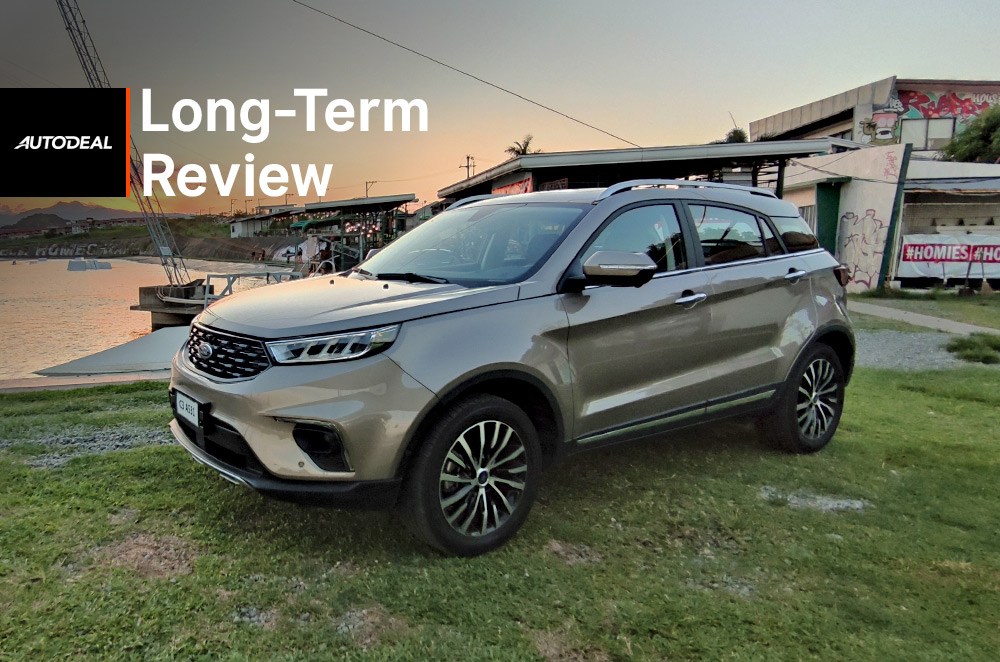 It’s been over a year since the Ford Territory was introduced to the Philippine market, and we’re sure that some of you might be wondering if it has aged like a fine wine or gone stale over time. That’s usually the case with most cars that are made in China, and while we’ve discovered some “Chinese car’ quirks, it still wears the Blue Oval with some purpose.

As such, here’s a long-term review of the Territory. We’ve logged over a thousand kilometers collectively as a team, and our thoughts go beyond just a weekend drive with the car, in fact, Ford was generous enough to give it to us multiple times to test again and again. As such, here are our thoughts on the Ford Territory as a long-term car. 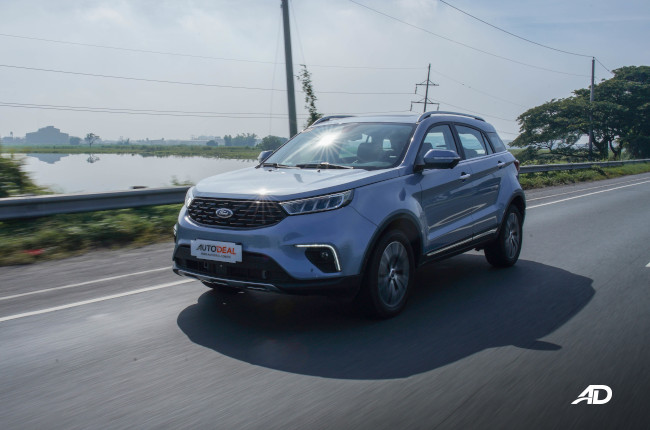 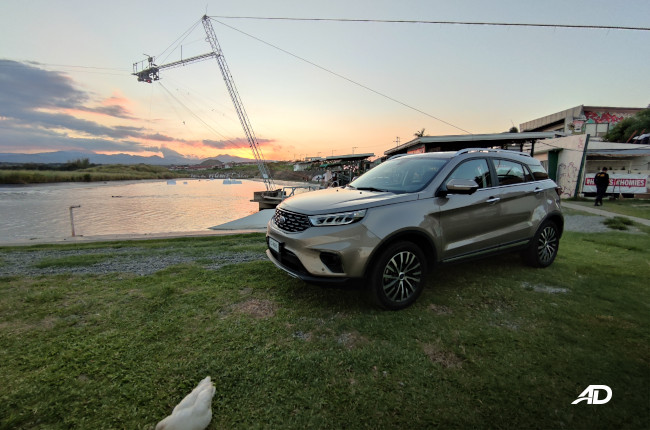 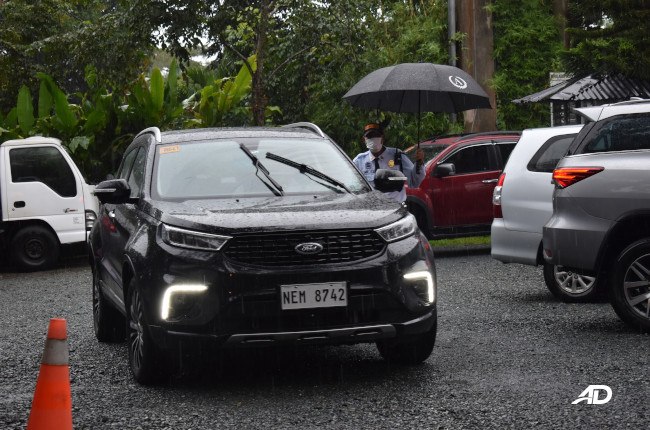 The units that were lent to us on separate occasions all had mileages that ranged from 6,000 to 8,000. Ford lent us the cars after we reviewed them, so they experienced quite a bit of driving in our hands and in the hands of our other colleagues in the media. Even though rain or shine, even the black variant still had a good level of gloss in it with minimal swirls. The paint quality over time is pretty decent, and the styling, well, that’s another thing.

We got tired of seeing the Territory, not because it’s designed poorly, but because a lot of people enjoy its look. It’s not uncommon to see a Territory out on the road. Even when we were plying the roads of Manila, the highways or NLEX, or the twisties of Tagaytay, we saw at least two or maybe up to 10 Territories. Now that isn’t to say that it is a Vios or Innova or anything, but it’s a decently common car that can still tug at people’s heartstrings, as evidenced by their choice to go with it.

Overall, however, the LEDs are still as bright as we remember, the design is still as appealing as before, and the colors available are still quite eye-catching. One of our favorites is the light blue. 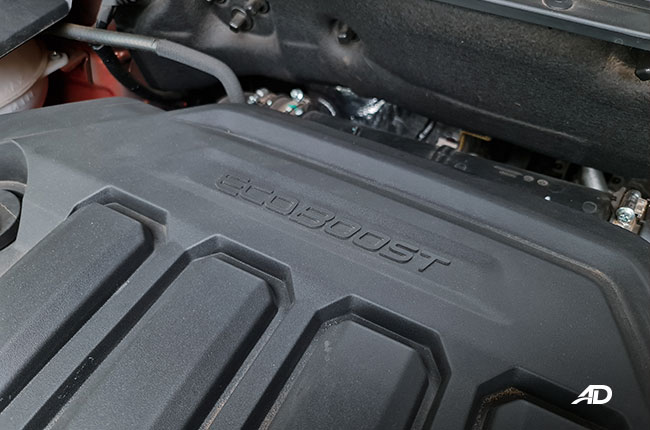 There have been a lot of developments in the subcompact to compact crossover segment, and the Territory’s engine is a little unexciting to drive. Mind you, that’s not totally a bad thing in our opinion. For most people that use a car in the city or use it for very sane drives, the engine is acceptably powerful and the transmission is respectable in its response. That being said, it’s not a total slouch since it has a decent pull from 0 to 100 km/h. The problem comes past the 100 km/h mark, where the motor struggles to pull the weight of the car. Of note, when we revisited the engine’s power output, we were fully loaded with anywhere between four to five passengers riding. The engine feels a little sensitive to changes in load, so that’s something that you need to take into consideration.

The reason why we initially had no complaints about the model at first was that we figured that not a lot of people drive as spiritedly as us. We’re not saying that the Territory can’t be a fun car to drive, but we’re just saying that there are “fun-er” options out there with sharper throttles and sportier suspension. Before you say anything, yes we tried putting it into “sport.”

Apart from that, the fuel economy is still as average as ever. Considering that the 1.5-liter turbo engine is pulling a lot of weight all the time, that’s to be expected. Our numbers dipped down the more people were in the car as well. Also, note that a full tank can last you from Manila all the way to Subic without any stops and at the limit on the highway. In the city, it’s still around 8 km/L. On the highway, it still managed to pull about 15 km/L unloaded, and about 14.5 with a bunch of people mucking about in the back. Still, quite consistent figures even after a decent amount of mileage have passed.

The interior held up 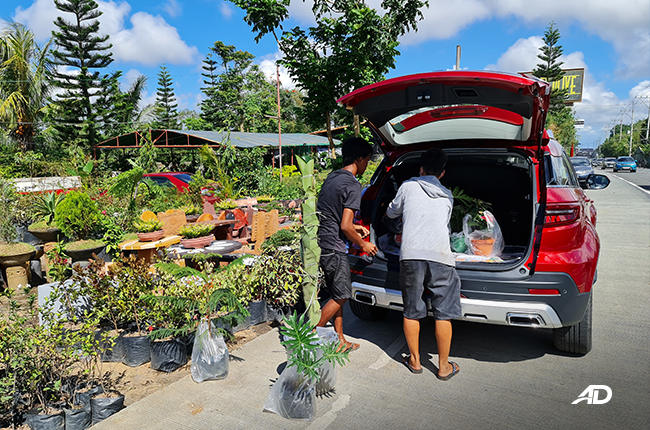 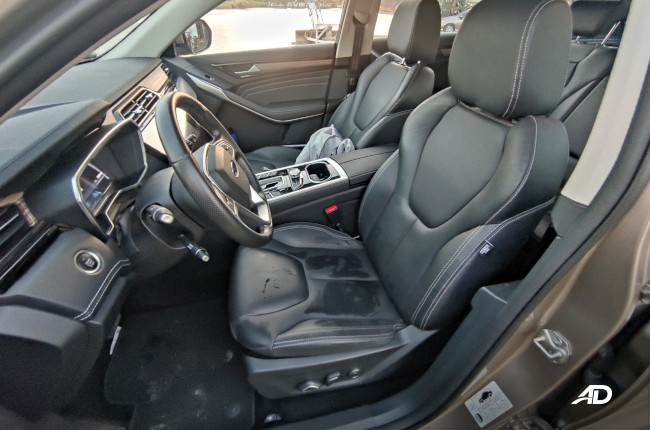 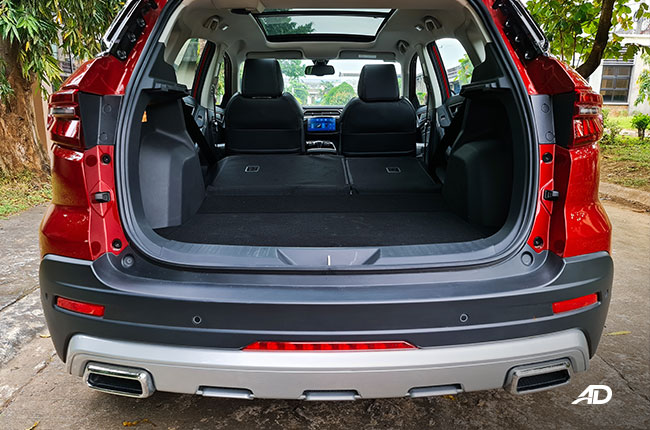 Even though the Territories we’ve been able to borrow passed through many hands, the interior plastics still seem sturdy with minimal to no creaks and rattles. It’s still predominantly plastic, however, with some soft-touch materials in key zones, but even those held up well.

Also timeless is the space that rear passengers get, which is plenty enough for occupants that are “healthier” or “sexier” than others. The space at the back is also plenty for overnight bags, shopping bags, or even plants! If ever you lack the space, you can fold down the rear seats to get an accommodating rear. While plastics and metal get old, open space will not and the Territory has plenty for a five-seat crossover.

Technology’s not as good as we remember 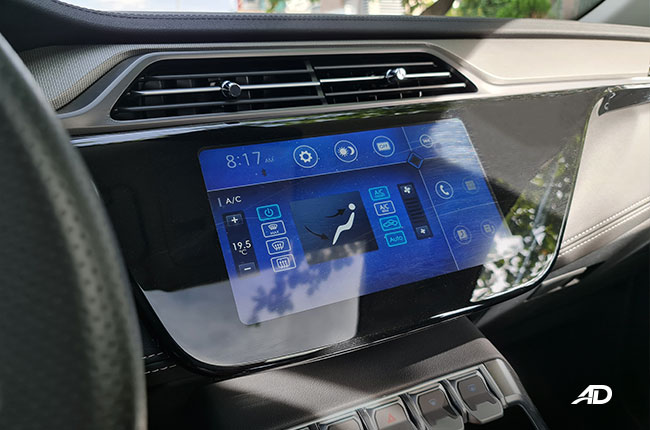 If you get the Territory, you better use the Android Auto or Apple CarPlay loaded into the head unit. The trouble comes when you will, unfortunately, have to navigate to the air conditioning controls, so our advice is to set it and then forget it. Just leave it in auto to blast cool air until the temperature is to your liking before you set off. It’s quite cumbersome to fiddle with the AC controls of the Territory, so much so that we wished it had come with physical buttons and not software ones.

Following that, the rest of the menus don’t flow as well as we remember. There are a few hiccups here and there, but everything else works almost flawlessly. We say almost because the 360 camera takes a little time to boot up when you flick it into reverse, but other than that, it’s still a great feature to have. Adaptive cruise works well, but we will note that the blind spot monitoring is a little too aggressive with its notifications. The car keeps you very safe while driving and it monitors your blindspots pretty well, perhaps a little too well.

Even with its quirks, it’s still an exceptional value 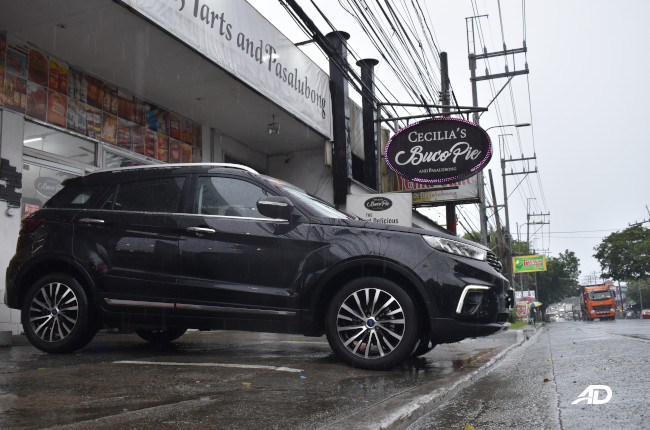 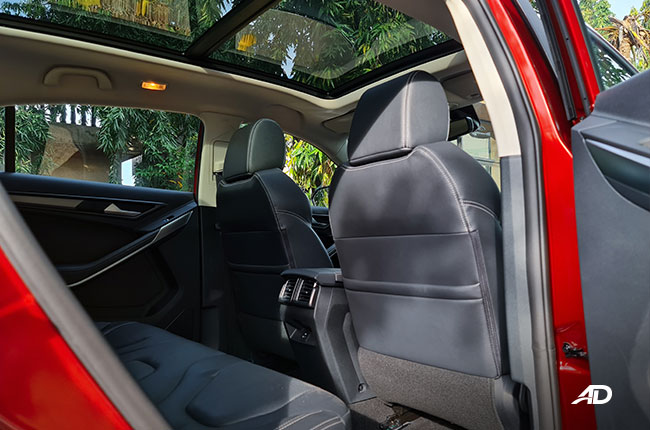 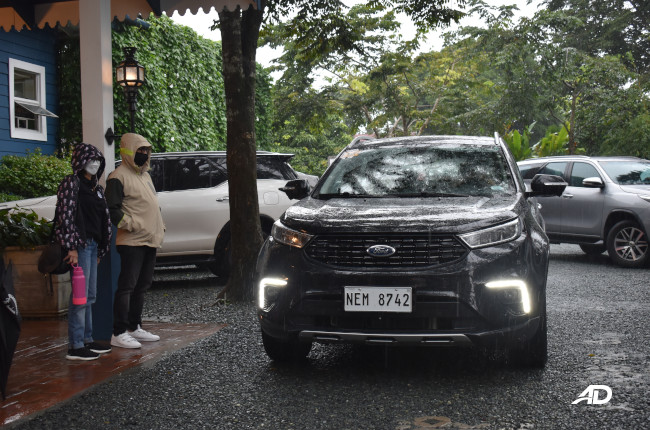 While not all of its more advanced features are polished, it’s not as if the car is defective. It takes getting used to but you will be able to get to your air controls eventually, and for a long drive, it’s incredibly comfortable even fully loaded, and it’s a great first, second, or third car to have.

If you find yourself puttering around town often, the Territory is a great vehicle to have with its space, features, and compact size. However, it’s an average highway miler, meaning that it could use a little more power for passing. It’s a so-so twisty road carver as its soft suspension gets in the way of more spirited driving. Although, through it all, we can safely say that it is a comfortable all-rounder that can do many things decently well, but not excel in just one area like some cars out there.

In terms of price, which comes in at P1,277,000 for the base trim and P1,310,000 for the top trim at the time of this review, it’s still a good buy. Hey, what about the more affordable models like the Geely Coolray or the Changan CS35 Plus? Well, for the price premium you get extra space in the back row and the Blue Oval’s logo all over. 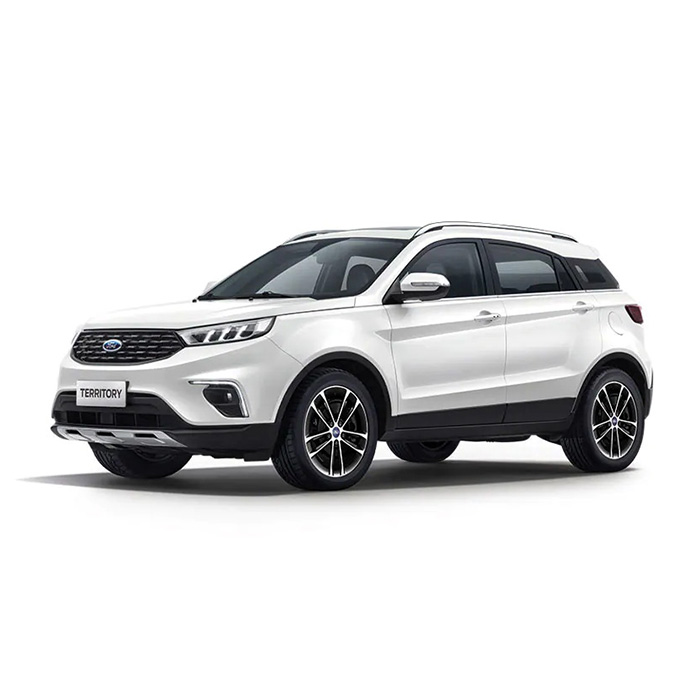 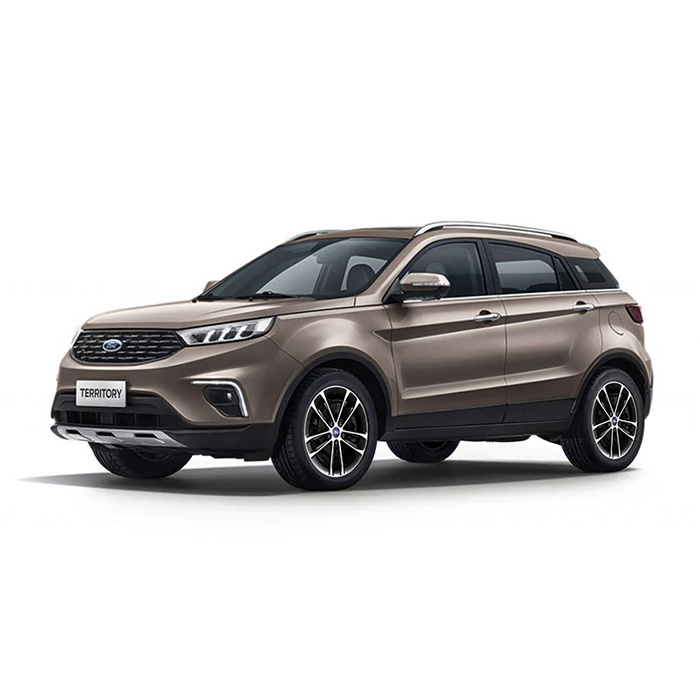 If you're ready to buy Ford Territory 1.5 EcoBoost Titanium+ CVT, you can reserve online!