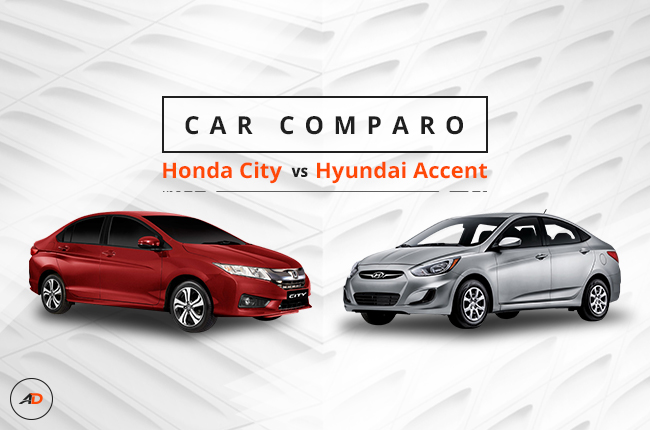 More and more people are venturing into the ridesharing businesses like Uber and Grab, which means there is an increasing demand for cars, especially the small, ‘relatively’ fuel-efficient subcompact sedans.

In fact, one of our Facebook followers asked our opinion on which car to buy for this business in our previous episode of AutoDeal Answers. Aside from the popular Vios, there were other 2 models that arose as top choices – the Hyundai Accent sedan and the Honda City.

Both models have their own pros and cons, but let’s compare their spec sheet closely to see what exactly their leverages are over the other. To put the specs comparison on the same ground, we matched their automatic transmission variants as both have a small price gap.

The Hyundai Accent sedan CRDi GL AT is priced at P848,000, while the Honda City E CVT has a sticker price of P804,000. Although the Hyundai Accent has a P44,000 disadvantage when it comes to the price tag, it’s kind of negligible when you choose to buy the car via a 5-year financing scheme.

However, if you buy it by cash, that price difference can be used on other things like accessories for the car or a vacation trip. With that, we’re giving this round to the Honda City E CVT. Let’s see if the Hyundai Accent sedan has something in store to make up for that gap. It’s a pretty interesting match when you peek on what’s under the hood of each cars. The Honda City runs on a 1.5L gasoline engine that’s mated to a continuously variable transmission (CVT). It has output figures of 120 hp and 145 Nm of torque. In contrast, the Hyundai Accent sedan has a 1.6L CRDi diesel engine, coupled to a 7-speed dual clutch transmission. It can churn out 136 hp and 300 Nm.

The 16 hp advantage of the Accent sedan might be small but looking at their torque figures, the Korean model has twice as much as the Japanese car. That’s more than enough to get you through ramps or steep roads.

Since both models don't have their fuel consumption ratings declared, we're giving this round to Hyundai Accent sedan based on engine performance.

This gives the Honda City a 2-1 advantage. Of course, the car’s safety and security features should never be left out. It’s a tight comparison between the 2 – both have driver airbags, anti-lock braking system (ABS) with electronic brake-force distribution (EBD), seatbelt pretensioners, and electronic door locks.

Although the Hyundai Accent sedan has vehicle stability assist (VSA) and hill start assist (HSA), the extra safety and anti-theft features of the Honda City, such as front passenger airbag, child seat anchor (ISOFIX), and security alarm with immobilizer is more than enough to steal this round from the Korean sedan.

With this, the Honda City takes a commanding 3-1 lead over the Hyundai Accent sedan.

As for the features, the Honda City takes this one from the Hyundai Accent sedan again. While both cars have keyless entry systems, the Kenwood Advanced 2-DIN system of the City has Bluetooth connectivity, which is missing from the 1-DIN head unit the Accent sedan. That means you can wirelessly connect your smartphone to the head unit for wireless calls – a convenient feature that also entails safety.

After a blow-by-blow comparison of their spec sheet, the Honda City wins by 3 points over the Hyundai Accent sedan. It’s bigger, safer, less expensive, and has more high-tech features than the Korean subcompact sedan.

However, if engine performance is your main priority in a car, the Hyundai Accent sedan is the better choice. After all, if you’ll use it for your ridesharing business, you’ll more likely to earn more because it's powered by diesel, which costs more than P10/l than gasoline. Moreover, it has 5-year unlimited mileage warranty, which is a one off your list to worry about.