Quite frankly, I didn’t think the words ‘Eco’ and ‘Mustang’ could be combined in a single nameplate, but Ford did. They downsized the engine of the muscle car—half the displacement and number of cylinders—and added turbo to hopefully reduce the high fuel consumption that has been synonymous to its name. Thus, the birth of the Ford Mustang 2.3 EcoBoost.

Gearheads and fans of the nameplate (well, most of them) took offense on this. They reckon that the iconic model should have muscle and should forever come with a low-growling 5.0L V8 engine. I would have shared the same sentiment with them, except that, we live in the Philippines where fuel prices are higher than Beyonce’s voice. With that, a more economical muscle car isn’t a bad idea at all.

But honestly, did the Mustang EcoBoost really stain the pony car’s reputation? And, will its promised better fuel-efficiency warrant it as a daily car? Ford Group Philippines (FGP) generously lent us one of their ‘Stangs to find out.

Performance
Engine Output (HP), Acceleration, Transmission, Handling 4.5/5
Design
Exterior & Interior Design, Quality, Fit and Finish, Ergonomics 4.5/5
Ride Comfort
Cabin Comfort, Suspension, NVH Insulation 4.0/5
Safety and Technology
Convenience Technologies, Active and Passive Safety Features 4.0/5
Value for Money
Amount of the vehicle you get for the price, Fuel Efficiency 4.0/5
What You Will Like
What You Won't Like
How We Do Our Reviews The Mustang is naturally a head-turner, as it’s different from the usual four-door sedans we see daily on local streets. Actually, it’s more than that. It’s a neck-breaker. It’s like a lady in a sexy outfit; everyone—even those who don’t know much about cars—will definitely give it a second or third or even fourth look as it passes by.

Well, who can blame them? The Mustang has been an icon since the ‘60s, a pillar to the motoring world and has been subject to numerous car movies. We’re sure glad the standout design of the current model backs up that reputation. At a closer glance, the Mustang’s great build quality is apparent. The longer you stare at it, the more you’ll appreciate its every inch. Although if I have to nitpick, I would prefer it to have LED daytime running lights (DRLs) instead of the standard yellow ones. Good thing it has great-looking LED headlights that illuminates the road well.

The Mustang is also huge in size — 4,783mm long and 1,915mm wide. In comparison, it’s even wider than the Ford Everest midsize SUV and almost as long, too. You might think that a car this bulky might be hard to drive and maneuver, but it isn’t. We’ll get to that later. 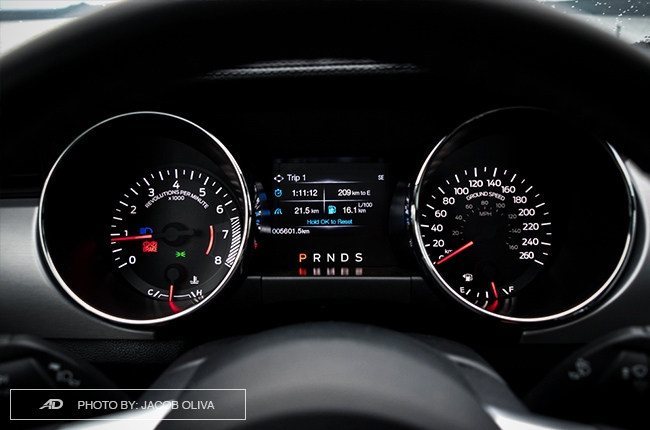 The array of great build quality continues inside the coupe’s cabin. I particularly love the combination of modern and classic touches, like the car’s trademark circular A/C vents and flip switches that go side-by-side with a humungous 8-inch touchscreen SYNC 3 head unit and digital gauge clusters. It’s a refreshing look, without closing its doors to its heritage.

Although, there are plastic parts inside the cabin that could have been made better. Still, the presence of auto-headlights, cool ambient lights, excellent sounding Shaker Pro-Audio system with subs, and easy-to-use vehicle controls makes it convenient and enjoyable even for the car’s occupants.

What the Mustang lacks, however, are speed-sensing door locks. This basic security feature, which can be found even on entry-level hatchbacks like the Picanto GT Line, should have been mandatory. Simply put, driving an attention-grabbing car with doors unlocked is like wearing gold jewelry while walking in Divisoria. As you would expect from a car with such low ground clearance, it’s kind of hard to get inside the Mustang, but you’ll get used to it. The Recaro leather seats for both driver and front passenger are positioned really low and can be a bit annoying at first. Well, at least until you get to your sweet spot. Those with bigger built might find the seats inadequate, though.

Being a two-door coupe, the Mustang has a 2+2 seating configuration. What’s surprising is that the rear seats are spacious enough for an average-sized Filipino like myself, unlike other cars of the same body type. I’m standing 5’6” and I can fit at the back with adequate head- and elbow-room. However, those who are taller than me might want sit at the front or take an Uber instead. Ingress and egress aren’t easy for bigger individuals, too. 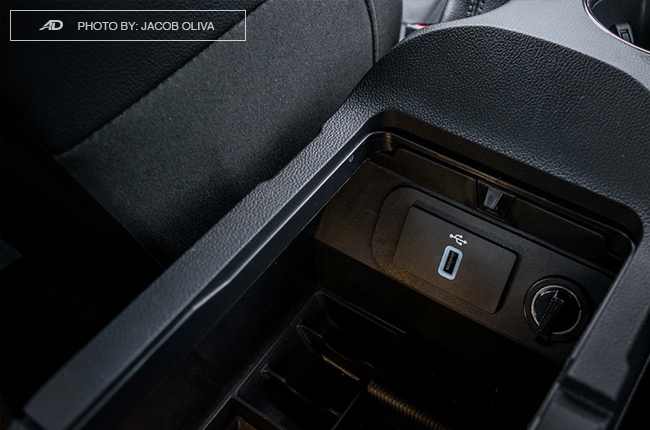 What I absolutely love about the Mustang is its relatively huge trunk space. I kid you not, it doesn’t look like it but it’s spacious enough to fit a month’s worth of groceries. Moreover, it can be fully maximized by folding the rear seats flat. Something that’s not available with the Mustang GT. Cool beans.

Ride comfort is also notable, almost comparable to a family sedan. Also, with the car’s low center of gravity and body-hugging seats, body roll is almost non-existent at all — all while having the capability to absorb unforgiving roads. Outside noise isolation can be improved, but with a car this powerful, the sound of the engine while driving is always welcome. However, the four-cylinder 2.3L EcoBoost gasoline engine under the Mustang’s hood isn’t that much of a growler. The muscle car’s grumble is replaced by the turbo’s whistle, which kicks in at 2,000 rpm. The spec sheet says maximum output is at 310 hp and 434 Nm of torque — a lot less than that of the V8. Sounds like a bummer? My actual drive on the road said otherwise. It was an exciting drive with the coupe; far better than what I expected from a downsized pony car. Must be the 6-speed transmission or something, but power was easily accessed with every step on the accelerator. The shifting was also smooth with minimal lag. I didn’t get the actual time but doing 0-100 km/h (in a controlled environment) must have taken less than 6 seconds. Probably less. When that’s not fast enough, there’s Sport+ mode that brought the engine to another level. But honestly, sticking with the normal Drive mode was more than adequate. And, my neck hurt more when in Sport+ mode.

Of all the cars I’ve tested, it was with the Mustang that I actually felt a little afraid to drive at first, well, because of its huge body. This changed when I entered the cockpit. Driving visibility was ample and blind spots were minimal with its concave side mirrors. The steering feel in Comfort and Normal modes was also perfect — not too tight, not too light. With the assistance from its sensors, maneuvering this fairly large car (even within the city) was a piece of cake. For the promised fuel-efficiency, the Mustang EcoBoost did good, comparable to how a midsize SUV will eat up gas. Heavy city traffic at an average speed of 15 km/h registered 3.9 km/l, while faster pace at 60 km/h clocked in 8.3 km/l. Highway runs with cruise control nailed at 90 km/h consumed 14.5 km/l. Take note, however, that these figures were from a light-footed, conservative drive. First impressions and prejudices aren’t always true. The idea of a smaller Ford Mustang EcoBoost might be a disappointment for some, but after testing the car for a week, the oval brand’s little pony has proven that it isn’t so little after all. It’s a true-blooded Mustang; only quieter and more suitable to be driven daily than its GT counterpart.

Plus, at P2,748,000 (P610,000 less than the GT), you get an eye-catching ride, a pop icon, and a very fast grocery shopper that we think Vin Diesel would approve. You know, just in case your wife needs those condiments and sliced bread ASAP. If you're ready to buy Ford Mustang 2.3 EcoBoost Premium SelectShift AT Fastback, you can reserve online!