It was a long day. Feature stories were needed left and right, while a plate of savory news articles that needed editing was served up to me on the side. All I needed was a breath of fresh air to end my day. And there it was – a Suzuki Jimny JLX MT test unit waiting to give me a ride back home.

A new media unit would normally mean inspecting every inch of details of the car, listening to and judging the engine, taking photos, and yes, more driving. But the Jimny actually made me more excited than ever because, admittedly, I’m one of those who acquired a taste for this Suzuki nameplate.

Performance
Engine Output (HP), Acceleration, Transmission, Handling 3.5/5
Design
Exterior & Interior Design, Quality, Fit and Finish, Ergonomics 3.5/5
Ride Comfort
Cabin Comfort, Suspension, NVH Insulation 3.5/5
Safety and Technology
Convenience Technologies, Active and Passive Safety Features 3.0/5
Value for Money
Amount of the vehicle you get for the price, Fuel Efficiency 3.0/5
What You Will Like
What You Won't Like
How We Do Our Reviews
Related: 2019 Suzuki Jimny makes Philippine debut, starts at P975K 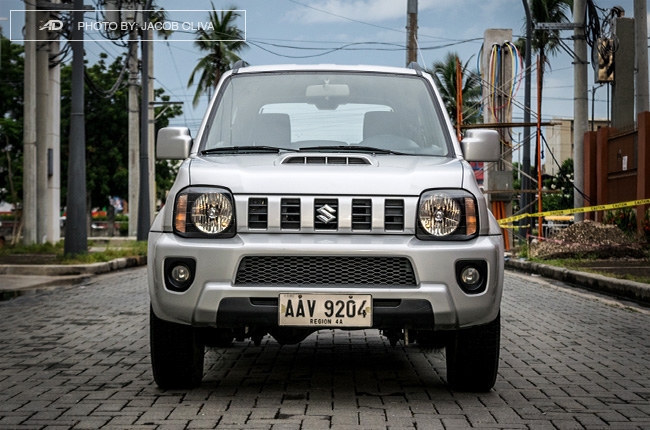 Ironically, though, the Jimny’s cabin is a bit far from what I needed that day. It’s a trip down the memory lane when seated inside. It’s like I was transported back to the time when I was just learning how to drive in a manual ‘90s Nissan Sentra. There’s a lot of hard plastics, along with the faint orange-lit dials and knobs. And oh, the head unit isn’t touchscreen but it’s a 2-DIN radio and can play CDs, too. I literally had to blow the dust off my CD collection to see if I could find my copy of Linkin Park’s Meteora, which I luckily found. Even the ribbed base of the gear-shifter is a throwback, as well as the lack of fuel economy meter in its analog gauge clusters.

With all these, ergonomics and ease-of-use stood out. There were no complicated menus or any modern luxury that, although are a welcome feat, are honestly non-essential. Plus, I know for a fact that this third-generation Jimny has been on the road for 20 years. I should have seen this coming. 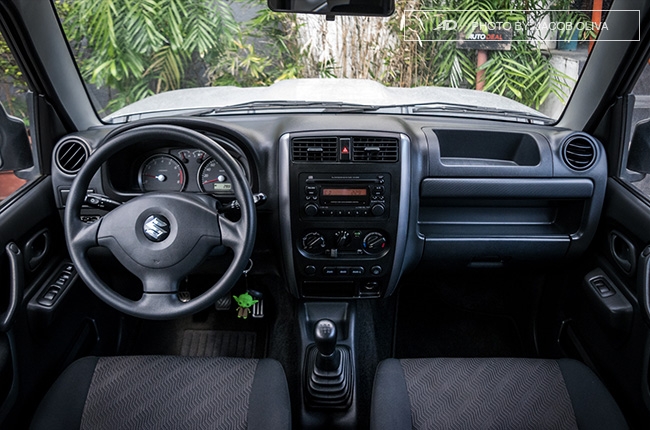 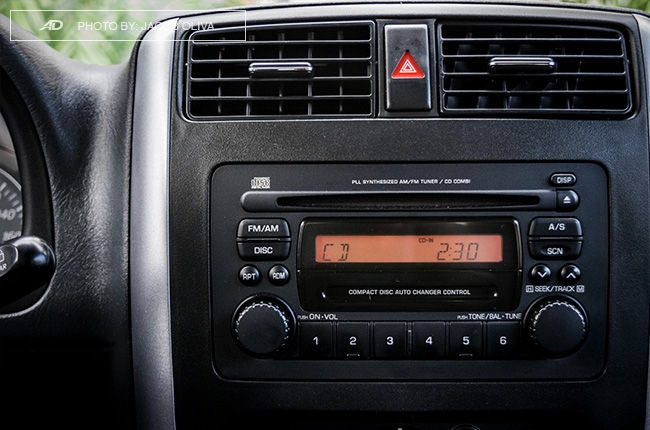 Space isn’t the Jimny’s best trait. In fact, the door panels were too close to my arms that I needed to be careful when turning as I might hit the windows with my left elbow. A 5’9”-tall, medium-built officemate also once sat in the passenger seat during the duration of the lend out and I’m telling you, we’ve never been closer than ever.

It’s the same story at the back. Although the Jimny is a four-seater, you can squeeze in a third one but that person won’t have any seatbelt, so nope, not going to happen. Headroom is generous for all occupants but legroom for two people would be enough for those standing 5’6” and below. Good thing is, there are a lot of cubby holders and a cupholder to use, and ingress/egress is easy. The trunk is just enough to fit two luggage – one large and one medium, standing and side by side. Cargo space can be maximized by folding the rear seats, and cargo loading is quite easy with its wide, sideward opening. 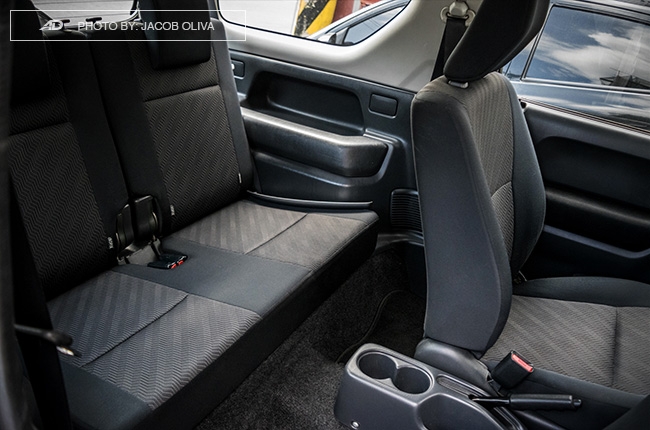 While the Jimny doesn’t really offer a lot of room, ride comfort is just adequate and livable. It isn’t as bouncy as midsize SUVs, but you can hear the three-link rigid axle with coil-spring suspensions when going through some rough patch. You can hear them loud, but the impact wasn’t felt by the passengers as it was mostly absorbed by the shocks. Road and engine noise wasn’t really muted much as well, especially at speeds.

Speaking of speed, the Jimny’s 84-hp, 110-Nm-torque 1.3L gasoline engine can only do so much. The great thing about it is that it was able to so with dignity. I appreciate the amount of torque it provides at low revs, albeit, short-lived as the RPM range per gear is limited; I was already in 5th gear at around 60 km/h. I was able to reach 100 km/h highway but with a screaming engine at 3,500 RPM. With this engine behavior, I was able to clock 9.3 km/L fuel consumption (combined city and highway) using the traditional method. One thing I love about driving the Jimny is how painless it was to use its five-speed manual transmission. Frankly, I was expecting it to be tough and cranky, but it wasn’t. The clutch pedal was shallow and the gear-stick was easy to shift. It wasn’t necessarily short-throw or snappy, but it’s close.

Given the Jimny’s 190-mm ground clearance and huge windows, driving visibility is among this car’s strength. However, the steering wheel is quite a workout; it’s challenging to maneuver into tight streets and within heavy traffic. It’s also a bit jittery during highway drives. There’s also prominent body roll when turning fast, which was totally understandable, and there were some moments of oversteer. Lastly, without tints, the air-conditioning unit would need to work harder to cool the cabin amidst hot noon. 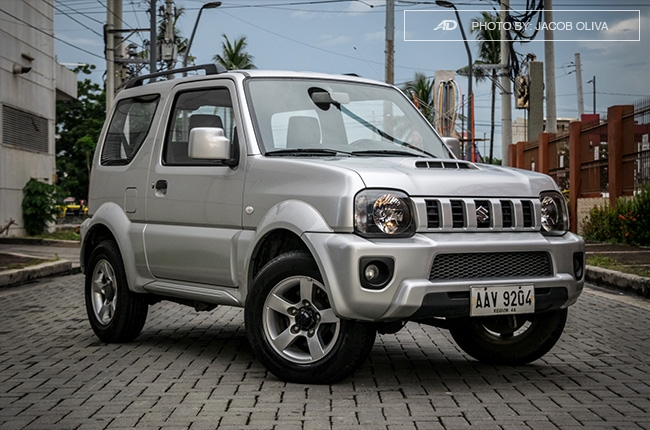 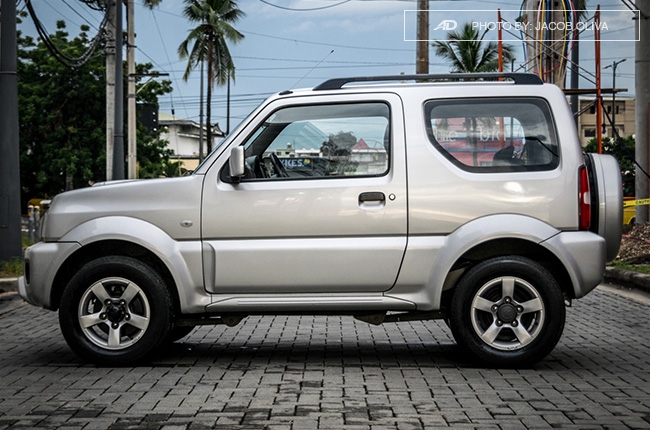 I tried to drive the Jimny in its natural habitat, and boy did I had a lot of fun. It wasn’t hardcore off-roading, though; I just found an unfinished construction site in Bulacan to test its prowess.

Its small size is quite an oxymoron to its off-roading reputation. But, that’s the very reason that this model is popular to its niche market – it’s cute, boxy, even sporting some retro cues that have been a design choice of yesteryears. More importantly, it’s a true off-roader, with ladder-on-frame chassis, considerable ride height, and 4x4 modes to suit any driving conditions. 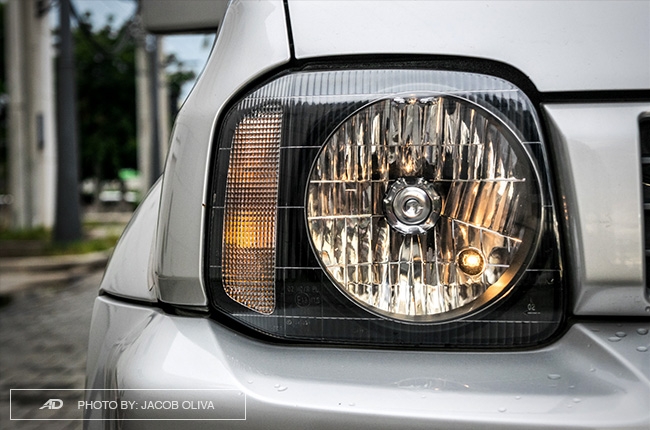 I’ve driven so many cars for quite some time, to the point that even several blank buttons immediately tick me off. The Jimny isn’t far from those vehicles. It isn't the fastest, not even the most comfortable, and not in any way the plushest, and yet, I love driving it. It’s like that obnoxious friend who you just can’t kick out of your life no matter how tacky he has become. It’s that adorable.

It didn't give me the breath of fresh air that I needed after a long day at work, but the fun factor it brought and the amount of control I possessed while behind its wheel was uplifting – something that I have missed with the introduction of newer cars and technology in the market. Admittedly, though, P910,000 for the Jimny JLX MT is a bit much to ask. But consider this: what else can you get at this price point that could go basically anywhere? Besides, if this version isn’t your cup of tea, the fourth-generation Jimny might be coming soon, although Suzuki Philippines is yet to announce its exact arrival. Sure, it will have more toys and more updated features than this one, but that would also mean a higher price tag.

[UPDATE: The 2019 Suzuki Jimny made an appearance at the 7th PIMS, but Suzuki Philippines confirmed that it will start selling the next-generation off-roader by the second half of 2019 due to high global demand.]