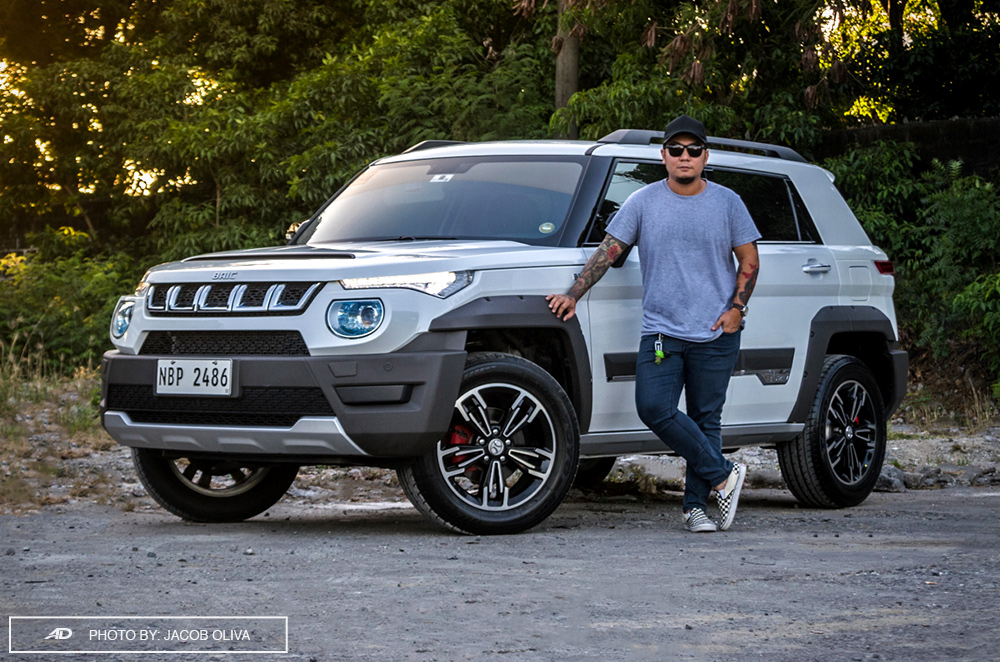 Ah, the BJ20. It’s undeniably the most attractive vehicle in the local lineup of BAIC – far from the MPVs and minivans that the Chinese marque used to sell.

The BJ20 started out as concept vehicle shown at the 2015 Shanghai Auto Show and from there, it made its way into production, and then finally here in the Philippines this year. I asked one of BAIC’s execs why only now, to which she answered that the tax exemptions given to Chinese cars paved way for them to bring the car at a lower price, which is obviously a selling point to vehicle buyers. But does the BJ20 tick all the boxes when it comes to what the prying eyes of Filipino car buyers are looking for?

There’s only one way to find out.

Performance
Engine Output (HP), Acceleration, Transmission, Handling 3.5/5
Design
Exterior & Interior Design, Quality, Fit and Finish, Ergonomics 3.5/5
Ride Comfort
Cabin Comfort, Suspension, NVH Insulation 4.0/5
Safety and Technology
Convenience Technologies, Active and Passive Safety Features 4.0/5
Value for Money
Amount of the vehicle you get for the price, Fuel Efficiency 4.0/5
What You Will Like
What You Won't Like
How We Do Our Reviews 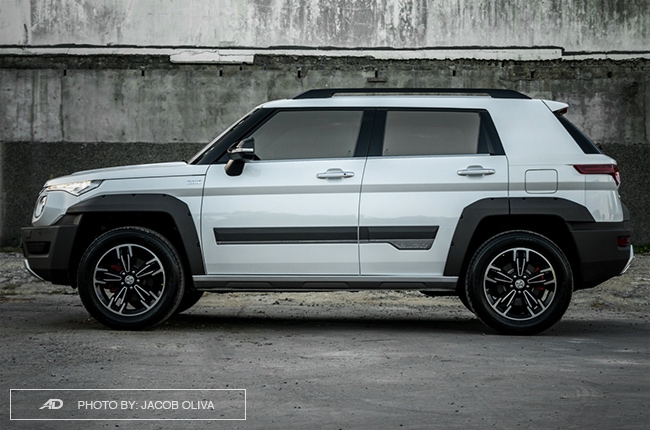 Admittedly, I like the BJ20’s wide, beefy stance that goes with its quirky fascia and unorthodox styling. But one can’t deny that it’s reminiscent of other cars. It’s like the mish-mash of three models: the grille of the Jeep Cherokee and the taillights of the Mazda CX-5 – all encased in a body that will remind you of the Toyota FJ Cruiser, sans the short rear doors.

Though the inspired design may be polarizing for a lot of people, it somehow works for the BJ20. Well, at least that’s how I personally see it. Especially when you get to inspect the car closely, and experience the lot of features it offers. The car’s fit and finish are okay, while the detailed accents on the grille are a nice touch. I wish I could say the same for the car’s abundance of chrome and the faux-hood scoop, which I’m not really a fan of. For starters, the BJ20 follows the three separate lighting configuration trend that you can see on the Mitsubishi Xpander, Hyundai Kona, and Nissan Juke, minus the fog lamps since this car doesn’t have any. The top lights are the daytime running lights that double as the turn signal lights, while the round ones in the middle are automatic headlamps – both LEDs and provide great visibility at night. There are puddle lights on the auto-folding side mirrors, too, which are very useful, I reckon.

At the rear, the saga of “I am tough” styling continues, but what I appreciate so much is the way its LED taillights look at night. They are pleasant to the eyes, increasing the car’s overall appeal. On its side, I dig the 18-inch rims’ design, which is complemented by red brake calipers and a towering 215mm ground clearance. Partnered by “riveted” fenders, it gives the impression that the vehicle is a legit off-roader and something that could go anywhere. Except that, it wouldn’t – this car doesn't have off-roading capabilities. The 1.5L turbocharged engine inside the BJ20’s bonnet churned out 147 hp and 210 Nm of torque. These numbers were enough to pull the car’s massive body, and more importantly, these are greater than similarly-sized power plants from other cars. There wasn’t any problem reaching legal speed limits on the highway and the turbo kicked in at around 2,000 RPM to boost the car’s power. Although, its continuously variable transmission (CVT) proved to be its weak point; you would really need to have a lead foot for a more abrupt change in speeds, or you could engage the manual mode to downshift manually and give the car its needed pull. I certainly felt that there’s room for wanting more because of this. 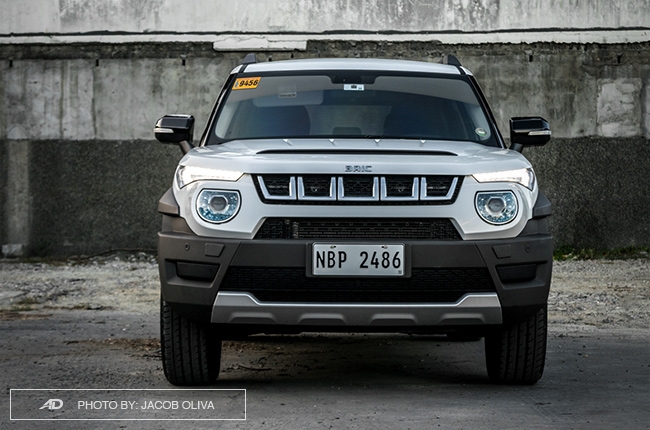 In addition, the “rubber band” effect of CVTs was apparent in the BJ20 and the crossover was hesitant to move from a standstill. There was also a hiccup sometimes while slowing down, almost like the car was downshifting harshly, which was odd. But overall, it’s a relatively light drive around the city, brought about by the car’s maneuverability and heaven-sent brake hold feature.

With these driving characteristics, what impressed me was the BJ20’s fuel efficiency. An hour on a traffic-stricken EDSA read back 10.5 km/L, while faster city paces during Sunday gave out a 12.1 km/L reading. Highway stints are a bit wasteful, registering 14.7 km/L with the cruise control set at 90 km/h. I particularly like the BJ20’s handling, as the flat-bottom steering wheel has a great weight to it and employs a dynamic feel. It’s light during slow maneuvers while highway runs were planted and composed. Tackling twisties wasn't a problem as well, as understeer was minimal from this front-wheel-drive crossover. Braking power, on the other hand, was abundant and safe, thanks to the minimal dipping and the set of disc brakes on all fours.

Driving visibility while on the BJ20’s driver seat is just fine, as it has a wide windshield and huge side mirrors. The solid C-pillars might look like an obstruction of view from the outside but really, they’re not. Not if you adjust your mirrors properly. 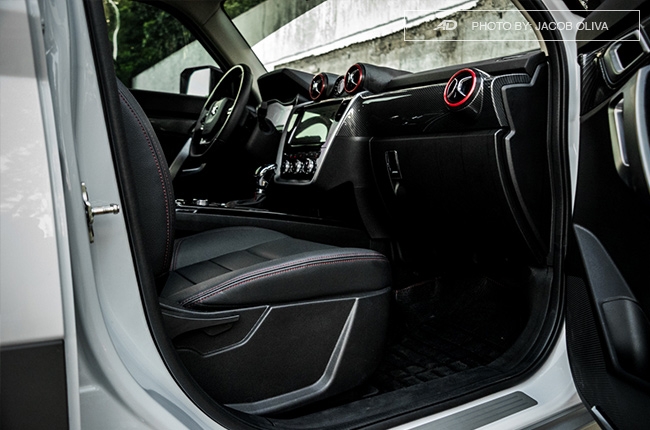 Inside, I instantly noticed the BJ20’s massive cabin space in the front and at the back. Leg-, elbow-, and head-room are abundant for five people standing up to around six feet, which accounts to the car’s overall comfort. Another one for comfort is the cozy air-conditioning that didn’t have a hard time even at high noon and the soft leather seats. The A/C has air quality sensors and ionizers, too, which could eliminate odors inside the cabin in a breeze. Such simple things make riding and driving the BJ20 a desirable experience.

Although I must say, it’s a bit of a mixture of emotions when it comes to the BJ20’s interior styling. The cabin layout, red stitches and accents, circular vents, digital inclinometer, and faux-carbon fiber print that spread across the dashboard and the door panels tell you that the car is sporty and a hardcore off-roader, but the copious amount of satin and shiny chromes tells you that it’s classy. You can’t be the king of both worlds, really. 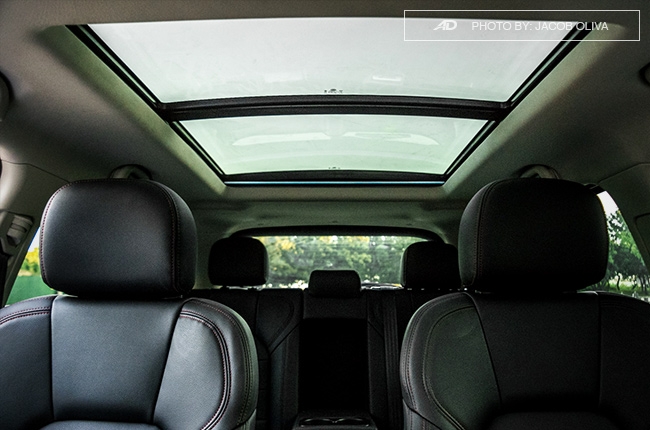 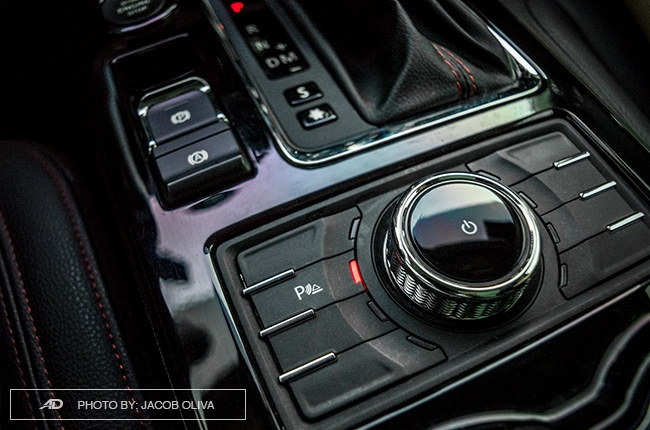 The driver seat is power-adjustable and gifted with lumbar support, but I wish the steering wheel is telescopic so finding the recommended driving position would be easy. Almost all the buttons on the dashboard provide great feedback, except for the turn signal sticks which are a bit flimsy. Nevertheless, the controls are intuitive and all within my arms’ reach. Ride comfort is commendable, too, as the suspensions (Mcpherson front/Multi-link rear) are tuned like most crossovers – able to absorb abuse from dilapidated roads without inflicting the impact to the passengers.

The crown of the BJ20’s cabin is its 10.1-inch touchscreen infotainment system. Yes, 10.1. It almost looks like a laptop screen for me, and the best part is, you can play movies in it via a USB thumb drive. It also doubles as the display for the rearview camera and the proximity sensors that surround the car. It would have been one of the best infotainment systems out there if not for its white background, which kind of breaks the car’s dark interior theme. Here comes my favorite part: the panoramic sunroof that extends up to the rear. It gives ambiance to the entire vehicle, especially at night. Speaking of the rear, passengers at the back would have a foldable center armrest to toy with, along with a 12V outlet. The trunk space is also extensive and could be maximized by folding the backrests flat to the floor and removing the trunk lid, but could be better if it was lipless for easy cargo ingress.

With these features and characteristics laid out, is the P1,288,000 sticker price of the top-of-the-line BJ20 Luxury a worthy price tag? I would say yes, and here’s why: Sure, this car has rough edges that need smoothening, especially with its drivetrain, but at its price point, you get a polarizing head-turner with an above-average build quality and several features that you’ll likely find in pricier cars. With Chinese cars currently going against the stigma handed over by their predecessors, the BJ20 is a good start. In fact, it could readily compete with the more popular Japanese and South Korean nameplates on the road, and kudos to BAIC for that.