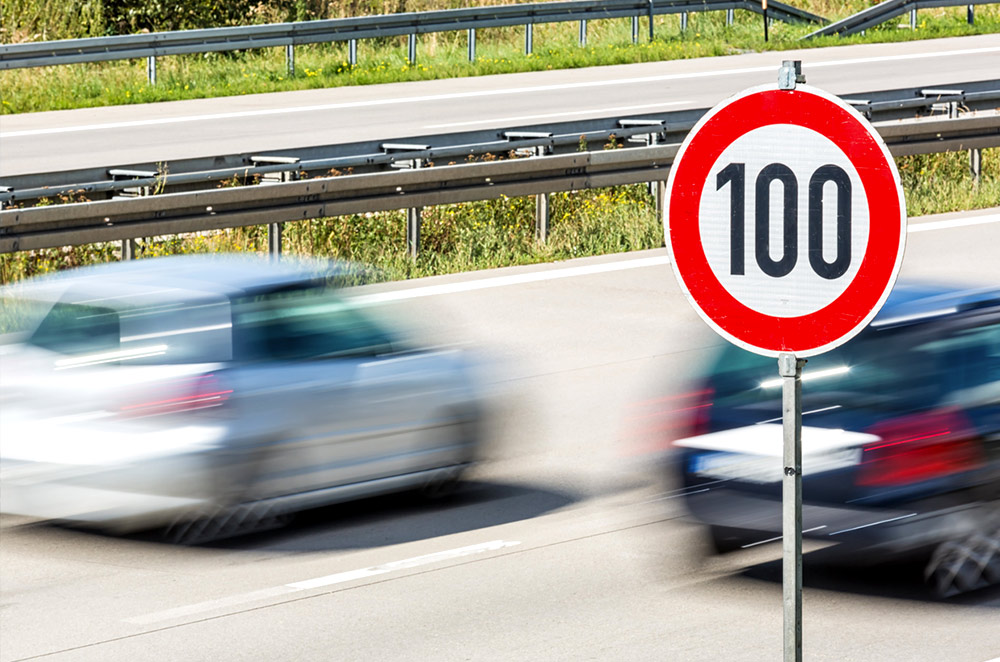 If you have been driving in the Philippines for quite some time you may have noticed that driving conditions and norms are ambiguous at best, and are usually “played by ear” at the worst. While road markings and signs have come a long way from what they were like many years ago, the lack of proper enforcement and understanding, to begin with, is the main cause of driving errors and road accidents.

With that in mind, we are going to take a look at a specific kind of road sign: the speed limit. We will tackle their uses, understand why they exist, and what you should expect to do or see when you encounter one of these regulatory limits on the road.

Related: Quick guide to speed limits in the Philippines

What is a speed limit As the name suggests it is a limit or cap to the speed you should be traveling through a certain area or on that specific section of the road. Vehicles may not exceed the speed limit unless they are prepared for violations and corresponding penalties.

On specific roads, speed limits can also be vehicle-specific, covering vehicles such as passenger cars, trucks, buses, and motorcycles. In the absence of specific vehicle speed limits, the posted limit on the side of the road applies to all types of vehicles.

Remember that speed limits are the maximum allowable speeds when traveling on the road in perfect conditions. Meaning, clear weather with good visibility, flowing traffic, and no obstructions or road debris. As traffic conditions change, vehicle speeds need to adjust to keep everything safe and prudent for all motorists.

Who creates or decides on the speed limits? 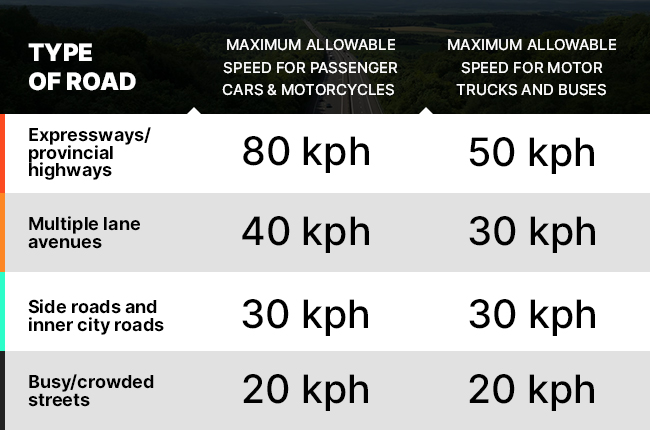 In the Philippines, the speed limits you see on the roads today are set under the Republic Act No. 4136 and by the Land Transportation and Traffic Code. Legally, local government units can also set speed limits within their area of responsibility. Other entities that can set a speed limit are traffic management offices of private areas such as subdivisions for the roads that fall under their jurisdictions. In the absence of a posted limit, the limits set by Republic Act No 4136 and the Land Transportation and Traffic Code take precedence. Several factors can contribute to the presence of speed limits and the allowable maximum speed vehicles can travel. one properly, studies are conducted on the road, identifying the type of traffic, how it flows, how vehicles interact with one another, and identifying points of conflict.

Intersections, blind corners, the presence of pedestrians, and the vicinity of establishments and buildings close to the road all influence the speed limit. Roads with fewer intersections—with fewer travelers moving perpendicular to one another—can generally sustain higher maximum speeds and still be considered safe. Roads with more intersections, and often more motorcycles/bikers and pedestrians, have more people moving at different speeds in different directions and need lower maximum speeds. Yes, speed limits can change either because of a regulating body or because of changing traffic conditions such as due to construction on the road. Regulating bodies and agencies that have control over a road must always be on top of any mishaps or changes in driver behavior. Have drivers been traveling much slower due to traffic, or in the presence of too many intersections or turns? Maybe the speed limit might need lowering for better flow. Are there too few vehicles using the lanes, and the lack of traffic buildup is throughout the day? Maybe a higher speed limit to facilitate faster travel could work.

How the area develops or how much more congested an area will be in a decade should all be taken into consideration as well, as it will require extra roads and much more complex traffic control schemes, like traffic lights, maybe roundabouts, and more pedestrian-focused infrastructure.