When Volkswagen Philippines, under Automobile Central Enterprise INC. (ACEI), launched its newest fleet of German cars this year, the company wasn’t afraid of declaring that these cars were made in China. Now, we all know the stigma against things made in China; never mind that your precious smartphones are assembled by Chinese, or majority of your children’s toys are from China as well – people are quick to dismiss things the moment they see these three letters: M.I.C.

Admittedly, I, too, can be pragmatic when it comes to China-made cars. Maybe because of past experiences with these types of cars, or the fact that China had a long way to go to match with the quality of Japanese, European, or even Korean-made vehicles. Whatever these pre-judgements may be, the Lavida compact sedan shed off the biases I have against China-made vehicles. Here’s why. Volkswagen vehicles are known for their extensive use of straight horizontal lines and no BS styling, which are proved to be timeless. For several years, the German marque has sported this look and honestly, I like it. It’s perennial, so to speak. It’s like a well-tailored suit – we’re pretty sure it won't go out of style 10 years from now. Yes, it’s safe and plain, bearing not so much flare, but I would choose this vanilla over outrageous styling any time of the day. Plus, the shark’s fin antenna is a nice touch. As a compact sedan, the Lavida is the smallest in size when compared to famous nameplates like the Toyota Corolla Altis and Hyundai Elantra. It’s 15mm shorter than the Toyota, while 15mm narrower than the Elantra. This makes the car easier to maneuver in tight city roads, as well as weaving through heavy traffic. Its 16-inch alloy wheels make the car look tall, but it’s still lower than the Corolla Altis. Even with the Lavida’s compact exterior size, its overall interior space is generous. I stand 5’6” and I can fit snugly in the car’s seats, even when sitting at the rear seat behind my normal driver’s seat position. The front bucket seats are also adequate to support my buttocks, while rear passengers get the luxury of having a foldable center armrest with cup holders.

In addition, it has a lot of trunk space to accommodate three to four medium size luggage, and can be further maximized with the rear seats folded. 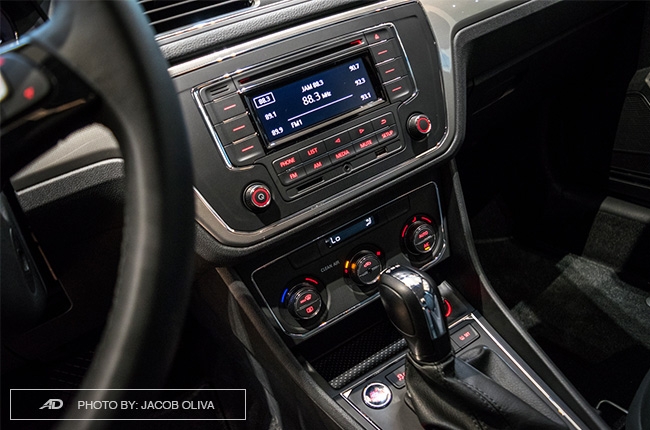 The problem with China-made cars from years back is that the quality of the materials used inside the cabin look really cheap. I didn’t study industrial design nor do I have a background in manufacturing, but I’ve reviewed a lot of cars and I immediately know if the materials used are durable and of high quality just by touch.

With the Lavida, soft plastics populate the cabin while the seats are clad with supple leather. Best part? Scratch-magnet piano black plastics are minimal, which is among the things I hate in several modern cars. At P1,171,000, the Lavida is admittedly on the pricey side when compared to the mentioned similarly-specced rivals. However, this price tag is well-matched with the plethora of features that the car has. It has a push start/stop button, front and rear parking sensors, cruise control, one-touch (up and down) window controls, automatic dual-zone climatronic air conditioning, sunroof, glovebox with cooling, and cornering lights.

Granted, the non-touchscreen head unit is some kind of a letdown at this price point, but it has several connectivity functions such as Bluetooth, auxiliary input, USB, and SD card, while its six speakers sound great.

Competitive power figures even with the small 1.4L TSI engine The Lavida’s measly 1.4L fuel-injected TSi gasoline engine may be small in displacement, but its output is at par, if not more, than the mentioned rivals. Why? Because it’s turbocharged, making it capable to churn out 128 horsepower, which is the same as what the Corolla Altis can produce. Better yet, its torque output is a class-leading 225 Nm, which is achievable as early as 1,400 rpm.

To match those figures, the Lavida is equipped with disc brakes at both front and rear wheels, and comes standard with ABS with electronic brake force distribution, brake assistant, and tire pressure monitors. Power is transferred to the front wheels via a seven-speed direct shift gearbox (dual-clutch transmission). With these things in mind, we’re looking at great progress in China-made cars; progress which was seen on South Korean counterparts that suffered the same stigma before – and look at them now. It’s only a matter of time before we begin to accept that China is making quality cars, and the Volkswagen Lavida is great way to supplement that paradigm shift, together with the smaller Santana sedan.

Although, we still have our reservations when it comes to the Lavida’s overall driving experience, more importantly, its fuel efficiency. We’re scheduled to get the car for an in-depth review soon, so keep your eye on it.