Speed has always been an important aspect for automobiles, especially for gearheads. Although not entirely true, a car’s speed is commonly measured through its maximum output — in hp and Nm of torque. Consequently, most car-buyers often take the car’s output ratings as the basis of its performance. Because of this, automakers started using forced induction systems to boost their numbers on the spec sheet.

Forced induction systems, as its name implies, induce air into the engine’s combustion chamber in order to optimize burning of fuel. In turn, they give sizable increase in the car’s output, essentially solving the automakers’ conundrum about speed.

Examples of forced induction systems are turbochargers (a.k.a. turbos) and superchargers. You’re pretty much familiar with turbos as they are commonly available these days in mainstream cars. Superchargers, on the other hand, are mostly equipped in supercars with huge engines.

Both turbochargers and superchargers are designed to make cars faster, however, what are the differences between the two? If you were to choose between a turbocharged car and a supercharged car, which would be the better choice? 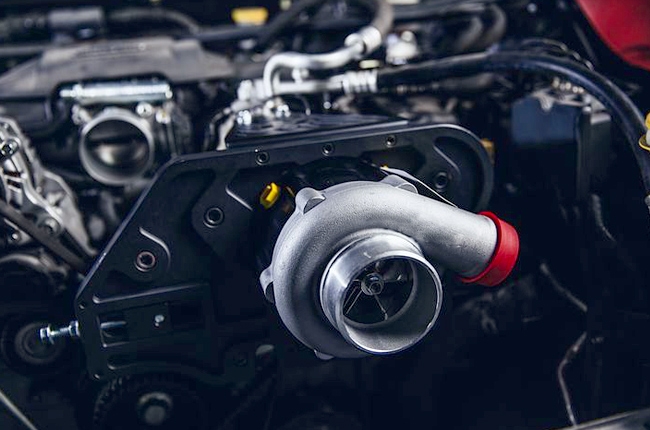 As mentioned, both forced induction systems are air compressors that allows more air into the combustion chamber. However, turbos are driven by exhaust fumes collected from the engine, therefore, they are not mechanically driven. Superchargers, on the other hand, are driven by a belt connected to the engine’s crankshaft.

By principle, turbochargers are more efficient as they basically run off using waste gases, as opposed to superchargers that eat power from the engine to produce, well, more engine power. Turbos need to have enough exhaust fumes to kick in, which only happens at certain RPM ranges. Because of this, turbo lag happens, and becomes, basically, its biggest disadvantage.

Superchargers, on the other hand, start as soon as you step on the pedal. With this setup, the needed boost is almost always available for superchargers unlike turbos that will need to reach a certain RPM range first. There are many technologies developed in order to solve the problem with turbo lags. Variable-geometry turbochargers (VGT), found in the diesel-fed Hyundai Accent, change the shape of the turbine housing to match the atmospheric pressure requirement as the car accelerates. As a result, there’s minimal amount of lag because low RPM boost is possible — all while still being efficient during high-speed runs.

Another technology developed is the twin turbocharging system, found in the MINI Countryman SD and the upcoming Ford Ranger Raptor. This system uses two turbines that individually activate at their designated RPM ranges, eliminating the spooling process.

These, however, are more complex systems that are said to be more expensive and difficult to maintain than regular turbos. The point of downsizing a car’s engine is to improve its fuel-efficiency. Since turbos will only kick off at a certain RPM, you can get the boost when you actually need them, meaning it will not consume more fuel when it’s not yet needed.

This trait makes turbos fit perfectly with mainstream cars that are downsized and marketed as fuel-efficient. Examples of such are Ford’s EcoBoost equipped in the 2.3L Mustang and Honda’s VTEC Turbo tech in the 1.5L Civic RS Turbo.

In contrast, since superchargers don’t need to charge up, the boost kicks in even at low speeds, which is actually not advantageous if you’re considering fuel-efficiency. That’s why superchargers are often equipped in supercars with larger engines because, really, do you think about fuel cost when you’re driving a V8?

The question of which is better between turbochargers and superchargers boils down to efficiency and fuel consumption. Turbos will always be deemed better for fuel economy, but if you’re the type of car-buyer who doesn’t really care about fuel costs, non-turbo and supercharged cars should be your thing.