The Honda Civic has been one of the cars that has generated a huge following in the Philippines. In fact, up until now, you can see a number of 6th generation Civics (EK) running on local roads. Aside from that one, some Filipino motorists are still attached to their 8th generation Civic (FD).

However, that trend took a U-turn when Honda Cars Philippines, Inc. (HCPI) introduced the all-new Civic last April 2016. The aggressive, sporty styling as well as the turbo technology allowed the 10th generation Civic to make a huge impact when its availability was announced in the local market. In case you’re wondering, HCPI claimed that they received more than 1,200 reservations for the all-new Civic after its official launch.

With that in mind, we borrowed the Civic RS Turbo in order to find out if it has lived up to the hype. Does this compact sedan's bold exterior design reflect its overall driving performance? More importantly, does it have what it takes to maintain and/or expand the Civic’s following in the country? Here’s what we have to say.

Performance
Engine Output (HP), Acceleration, Transmission, Handling 4.5/5
Design
Exterior & Interior Design, Quality, Fit and Finish, Ergonomics 4.5/5
Ride Comfort
Cabin Comfort, Suspension, NVH Insulation 4.0/5
Safety and Technology
Convenience Technologies, Active and Passive Safety Features 4.0/5
Value for Money
Amount of the vehicle you get for the price, Fuel Efficiency 4.0/5
What You Will Like
What You Won't Like
How We Do Our Reviews 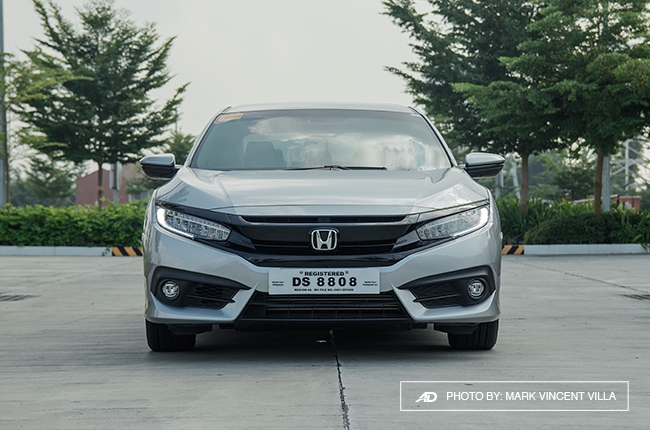 In terms of the exterior, we think that this Civic doesn’t need any introduction. Overall, it has an aggressive, sporty, and striking demeanor. It’s as if the Civic got agitated by something — on-guard, alert, and ready-to-strike. Up front, the sharp-looking LED headlights, gloss black grille, and angular bumper makes the Civic RS Turbo a mean-looking machine.

Turning at the side, it is integrated with straight character lines, prominent wheel arches, and 17-inch wheels. The sporty aura is further emphasized by the Civic’s sloping roofline, giving it a fastback-like appeal. The striking exterior continues to be seen at the rear through the C-shaped LED taillights, large bumper, and spoiler. The way we see it, Honda did everything right in terms of the Civic’s exterior. No need for aftermarket products, since this car already looks good, mean, and sporty from the get-go.

The Civic RS Turbo has a driver-oriented layout along with a black interior. At the driver’s seat, the first thing we notice is the digital instrument cluster, integrated with a red color theme. The fuel indicator and the engine temperature gauge are compliment by red meters/bars, which gives the interior an added sporty feel. However, the Civic’s red themed instrument cluster is not much of my liking – I’d rather have it in white. 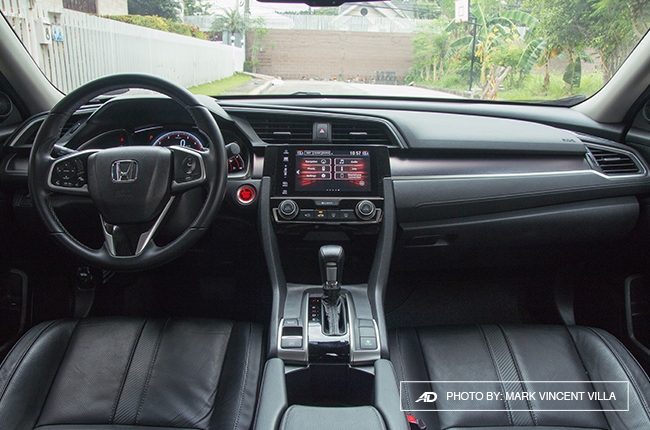 The Civic RS Turbo has an 8-way power adjustment for the driver seat, allowing you to set your preferred seating position. It’s also integrated with a bunch of features such as power folding side mirrors, speed-sensing door locks, touch volume controls on the steering wheel, paddle shifters, and a 7-inch touchscreen infotainment system. It’s also worth mentioning that this Civic comes with rain sensing wipers. With that, we think this vehicle has all the necessary features for its price.

This vehicle has a number of ports but, they are not visible at first glance. Honda hid it under the center console, which is a design trait that I personally like as it lessens the clutter brought upon by the cable wires of chargers and connectors. 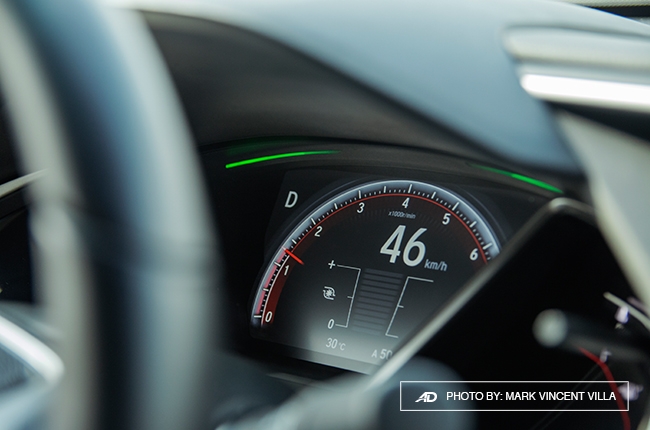 On the other hand, we mention earlier that this Civic has a fastback-like appeal. As such, the rear seats are a bit reclined, which is somehow similar to the design of ‘90s sedans. But don’t get us wrong, this does not mean that we don’t like the rear seats of the Civic. It’s more of the opposite because rear passengers will find it cozy and comfortable.

Speaking of passengers, this Civic can easily accommodate up to 4 occupants. You can max it out to 5 individuals but only if your passengers fall under the typical Filipino height of 5’5” and all have averagely built bodies. Moreover, the Civic has a generous leg- and head-room for rear passengers with the mentioned height. Driving the Civic around the metro is easy – thanks to its light steering feel and good forward visibility. Squeezing in congested urban streets is not a problem and it can absorb road bumps within reasons. The rear camera is also an advantage especially when you need to maneuver the car into tight parking spaces. But the infotainment system takes a second or two to feed the live image of what’s behind the vehicle. In terms of fuel economy, the Civic RS Turbo registered 6.5 km/l while crawling through Metro Manila traffic (average speed of 15 km/h).

It is on the open highway where the Civic impressed us the most. Power from its 173-hp 1.5-liter turbo engine is more than enough, allowing us to do swift overtaking. The Civic is planted and stable while running at highway speeds, while the steering wheel gets firm when you start to gain speed. This gives us confidence and peace of mind while we’re driving on the expressway. 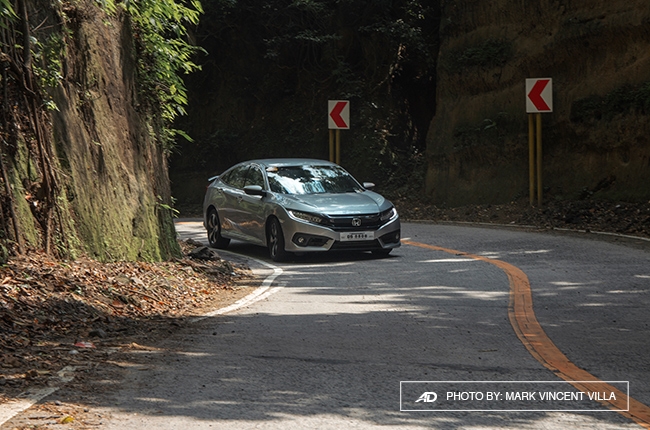 The Civic’s turbo is evident whenever you floor the accelerator pedal, giving you that extra power boost. However, we noticed that when the turbo kicks in – and you take your foot off the gas pedal onto the brake pedal – the Civic doesn’t slow down abruptly. The car continues to gain momentum and it takes around 1-2 seconds before the brakes take effect. Fuel economy-wise, we were able to register 18 km/l while running at an average speed of 90 km/h.

In winding roads, the Civic continues to impress. It has a relatively tolerable body roll with the suspension leaning on the firm side. Despite having a firm suspension, the overall ride comfort is not compromised. As a whole, the 10th generation Honda Civic is a strong contender in the local compact sedan segment. It may be one of the more expensive car in its class but you do have to take note that its P1,425,000 price tag is justified by the features that come with it. Look at it this way: the Civic has the quickness of an Allen Iverson, power of a Lebron James, and precision of a Kobe Bryant — now that’s what you call living up to its hype.