The Maxus D60 is the brand’s latest crossover to be added to its growing lineup into the Philippines. It comes to the local automotive market with two variants to choose from along with two seating configuration options. It also brings with it an attractive price point of below P1,300,000. With that said, we’ve listed 7 things to like about the Maxus D60, apart from its feature-rich variants and its competitive pricing. The Maxus D60 comes with sleek-looking LED headlights, at least for the top-of-the-line model. While the lower variant comes with halogen headlights and 5-seats, it’s the 7-seater variant that you want to get as it showcases the best that the vehicle can offer. Maxus Philippines made sure that the LED headlights perform as well as the vehicle. The throw of the headlights is on point with a defined cut-off as well. This makes sure that you utilize the most that the lights can offer without blinding oncoming traffic. If there is one thing that Maxus is good at, it is the headlights—even its other models share in the well-designed feature.

A unique blend of sporty yet premium styling Maxus Philippines has pulled out all the stops with the D60, as the automaker has given the crossover a unique blend of aggressive yet premium styling. You have the aggressive angles at the front that combine well with the smoother angles of the body, creating a sporty-looking vehicle. It has cuts and creases that give it a more masculine look especially near the front of the vehicle, yet it also has more gentle and feminine curves that wrap around the body of the crossover. The premium styling also continues to the rear of the vehicle as it comes with a squarish rear that is accented by its long LED taillights extending to the corners of the crossover. If you want an affordable vehicle that comes with sporty yet premium styling, then the Maxus D60 is your crossover of choice. Not only that, but it also comes with an affordable price point that many Filipinos will find attractive. The Maxus D60 also brings to the table great ground clearance, as it comes with an estimated 180mm. This makes the vehicle ideal for those who want a higher riding crossover that can be taken on light off-roading trips. Either way, the extra height gives the vehicle an imposing stance on the road furthering its sporty and aggressive look. If ground clearance is what you’re looking for, especially below the P1,300,000 price point, then look no further than the Maxus D60. 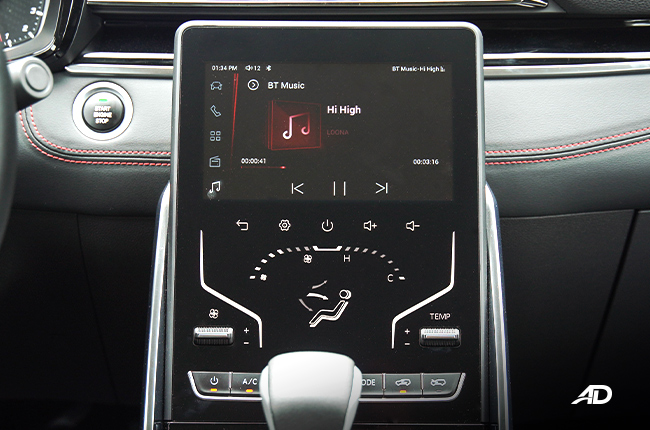 Maxus Philippines is staying true to its tagline of being “maxed out” as it has equipped the D60 with a large 8-inch infotainment system. While Apple CarPlay and Android Auto aren’t available with the head unit, Mirror Link is still available for those who want to connect their smartphones to the crossover’s infotainment system. It lets the user mirror the screen of their phones even down to the home screen. This opens up a slightly larger range of functionality such as streaming Youtube or other video applications to the 8-inch screen. While not the largest in its category it’s still plenty of space for your navigation needs and whatever else you want to be displayed on the infotainment system. Another unique feature that the Maxus D60 has is its climate control system. While there are physical buttons present, its main display is a digital one. It showcases the airspeed of the airconditioning system along with the temperature it is set to.  Understandability is set to black and white, however, it does get the job done in making sure you see the displayed information correctly. It also adds a techie feel to the vehicle further enhancing its premium feel on the inside. While leather seats don’t come as standard across the Maxus D60 lineup, the Elite variant does come with this feature. Maxus has done its best when it comes to the interior of the vehicle as it is one of the most elegant layouts that the brand has released thus far. To complement the sporty styling, the seats have also received a touch of that premium look and feel. While the material leans on the more durable side the seats themselves are comfortable and the bolstering is just right. The red accent stitching is also a nice addition to alluding to the powerful engine that the vehicle hides underneath its hood. Speaking of a powerful engine, the Maxus D60 packs a 1.5-liter turbocharged gasoline engine at its heart. It produces 167hp and 250 Nm of torque that is sent to the front wheels via a 7-speed dual-clutch transmission. While it’s not the most powerful engine in its segment it certainly works well with the chassis of the vehicle. The motor is refined and together with the body gives a smooth and pliant ride. Acceleration wise the D60 does it well. It’s not mind-blowing, but enough to get you a little excited when you really want to make the most out of it.