Small cars are getting more commonplace one Philippine roads. The market is quite receptive to many offerings out in the market today thanks to the high-efficiency gasoline engines, a light chassis, and a sub P1,000,000 price tag.

Chevrolet and Mitsubishi both have entries in the small hatchback market, with the underrated offering coming from Chevy, and the popular choice coming from the Japanese brand. The Chevrolet Spark and Mitsubishi Mirage both are striving to win over consumers with high-value, low-cost products that have handfuls of appeal. Which of these two hatchbacks are a better value when pitted against each other? Let’s find out in this Head-to-Head. The Chevrolet Spark and Mitsubishi Mirage both have a small car appeal, meaning that the styling tries to do a lot to catch your eye without big proportions to take center stage. The Spark’s face is more open and is dominated by Chevrolet’s split-grille design. A set of halogen projector headlamps with DRLs and foglamps can be found on the Spark, which contrasts the Mirage’s lone halogen reflector set. The Mirage’s face is not as open, though a small grille with an interesting pattern and a mouth that allows air to flow into the engine bay.

On the sides, the Spark features a larger set of alloys coming in at 15-inches. The Mirage, on the other hand, rolls on 14-inch alloys. The side profile of the two hatchbacks are quite similar, but the Mirage has a rounder appearance, unlike the angular design of the Spark.

The rear of the Spark seems more thought out than Mitsubishi’s approach. The fifth door hides the latch-release right above the plate holder. The Mirage, conversely, has its handle tacked on the rear. The taillights are also more interesting on the Chevrolet, compared to the old style that we see with the Mitsubishi. 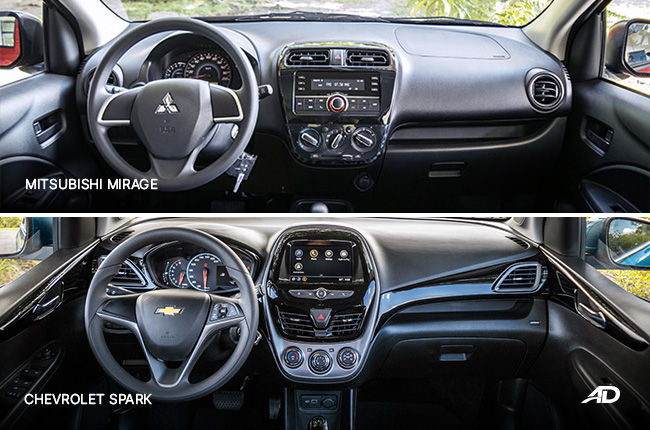 The interior of the Spark is a design match to its exterior – angular and more interesting. It features design quirks and the use of different textures that make the cabin a visually appealing place to be in. On the other hand, the Mirage’s interior and dashboard is plain. It has simple lines and rounded shapes that don’t stir emotions, which could be a good or a bad thing.

It’s the same story with the seats. Chevrolet has given the Spark dimension, while Mitsubishi’s are quite plain. Even the rear bench of the Mirage is quite flat. Cargo space is similar between the two, and since both are diminutive in size, a few bags will be able to fit, and for more space, the backrests of the rear seats can be folded. Chevrolet has opted to kit its entire lineup with the MyLink system – a head unit that is capable of pairing with Android and Apple smartphones through Android Auto and Apple CarPlay. It’s a modern system, no doubt. The Mirage has a basic head unit that has Bluetooth connectivity, but other than that, it’s not as intuitive as the Spark’s so there is much room for improvement here. The four-speaker system that can be found in the Mirage’s cabin is also a far cry from the six-speaker setup of the Spark. Both models come with dual airbags in the front, ABS with electronic brakeforce distribution, and immobilizer, as well as electronic door locks. The recurring theme here is that the Spark has just a bit more because Chevry’s mini-car has stability control, speed-sensing door locks, and ISOFIX tethers on top of everything else. The Chevrolet Spark has one of the biggest engines in its class. With 1.4L of displacement at its disposal, the motor produces 97 hp and 128 Nm of torque, it also has four cylinders, which is more refined than a three-cylinder. The Mirage has a three-cylinder engine popping under its hood. 1.2L of displacement is not a lot, and neither is the power figures compared to the Spark. At just 78 hp, and 100 Nm of torque, you can expect the Spark to outpace the Mirage.

Both have CVT options on the highest trim levels and that means fuel economy should be a high point for these two cars. The Mirage finally trounces the Spark, since it can average up to 12 km/L in the city, while the Spark manages 10.1 km/L. Going outside of the city and onto the highway is a different story. Once again, we are back to the Spark getting a leg up on the Mirage since its more powerful engine averages 24.3 km/L while the Mirage was only able to get 23 km/L. A negligible difference, perhaps.

The Spark in its CVT Premier variant goes for a swell P734,888, which is quite a bit of coin for a small hatchback, but given the loadout of features, and the class-toping engine with a CVT, the price starts to make sense.

What does not make sense is the fact that the Mirage in its GLX CVT variant costs P760,000. In this case, you pay more for less, which is something that seems counterintuitive.

It’s a different story after rolling off the showroom, though.