The Ford Territory and the Geely Azkarra are two offerings in the compact crossover segment. Both budget-friendly, these two vehicles are highly competitive in terms of tech features, looks, and build quality, though there are indeed some contrasting elements that make each one stand out on its own.

For this head to head, we shall be comparing specific variants of both crossovers, namely the range-topping Titanium+ for the Ford Territory and the Premium trim for the Azkarra. This comparison was strongly brought up by a close gap in terms of pricing. Therefore, we shall explore and evaluate each model in order to see which crossover fits your taste and budget. 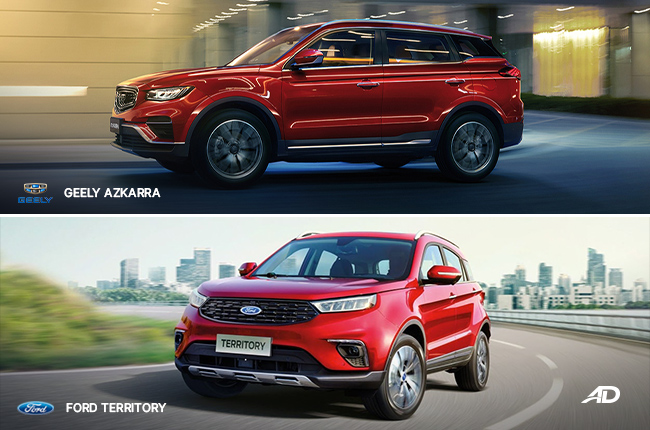 The Territory exhibits a stronger and more robust approach, while the Azkarra on the other hand, lean towards elegance and class. Either way, you really can’t go wrong with these two, as both of these crossovers look distinctively darn good.

Notably, both variants of the Azkarra benefit from the same 18-inch rims, while the range-topping Titanium+ of the Territory only gets the larger set of 18-inch alloys, with the entry-level Trend variant getting a different set of 17-inch wheels. Standard on both models are LED headlights, which indeed illuminate the road very well during nighttime.

Honestly, both vehicles have well-executed exteriors, yet it’s still a matter of taste. It’s you prefer the urban-spirited look of the Territory or the finely dressed appearance of the Azkarra, simple as that. 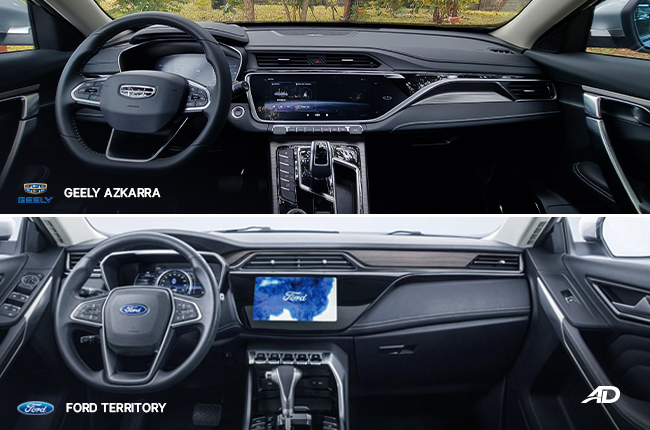 Both crossovers were finely crafted in order to deliver that ultimate satisfaction to both the driver and its passengers. To generalize the overall cabin of each model, the Territory features a more simple, clean, yet functional design, while the Azkarra managed to consistently maintain its overall elegance inside. It is also worth noting that quality materials were used inside each model.

What’s outstanding is that both models across all variants come standard with rear air vents and a panoramic sunroof which is a rare feature to be found at this price point. Cargo space for both models is indeed generous, allowing to store groceries and other larger items all thanks to its almost-flat folding second-row seats. Cubby holes are also generously found throughout the cabin, notably, the Azkarra even has a cooling box where you can store your drinks.

As for the seat material, the Territory outshines the Azkarra, as it comes standard with perforated leather. Step up to the Titanium+ the Territory gets heated and cooled front seats, which is a rare feature to be found in its segment. The Azkarra Premium, on the other hand, uses PVC for its seat material, although surprisingly it does feel and even smells like real leather. On the other hand, you can still get a more premium brown Nappa leather upholstery on the range-topping Luxury.

To cap it all off, the Geely wins this category, as the compact crossover looks and even feels more refined inside, though we do want to give credit to Ford for putting those insane heated and cooling seats. 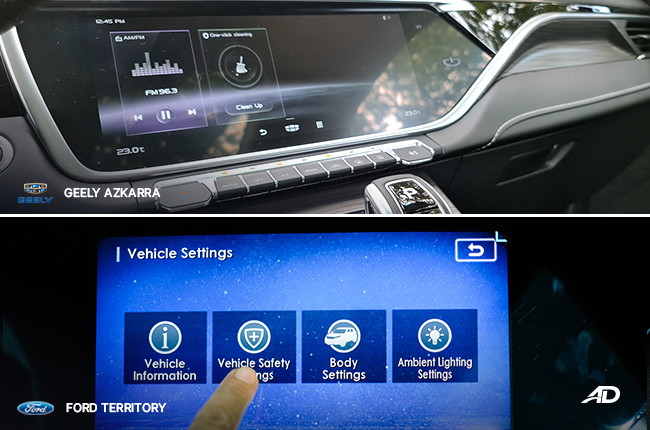 Both models are undeniably rich in features. To start off, both crossovers get large infotainment screens, 10-inches on the Ford, and 12.3-inches on the Geely. Gladly, two of these are very modern and upscale systems although there are some pros and cons that are in need of pointing out.

The Territory’s infotainment system has this quad view layout which you can manipulate its setup, it’s a bit complicated to use at first but you’ll eventually learn as you get going. What we appreciate is the standard Android Auto and Apple CarPlay phone integration on Ford’s infotainment system. The display is also quite good in terms of resolution, you’ll eventually appreciate this, even more, when the 360-degree camera is activated.

The Azkarra’s infotainment on the other hand is quite easier to use. Like the Territory’s infotainment system, graphics are clean and crisp, especially when displaying the 360-degree view of the vehicle. What is disappointing is the lack of Android Auto and Apple CarPlay phone integration, which is becoming common on most cars nowadays. Still, Geely provided its Azkarra with a screen mirroring feature which should somewhat serve as a suitable alternative as for now.

On this round, we shall pass on the trophy to the Territory, given its more innovative infotainment system. Frankly, the Azkarra’s infotainment is not bad, it just has to fill the gap, specifically speaking, Apple CarPlay and Android Auto matter to most car buyers nowadays. 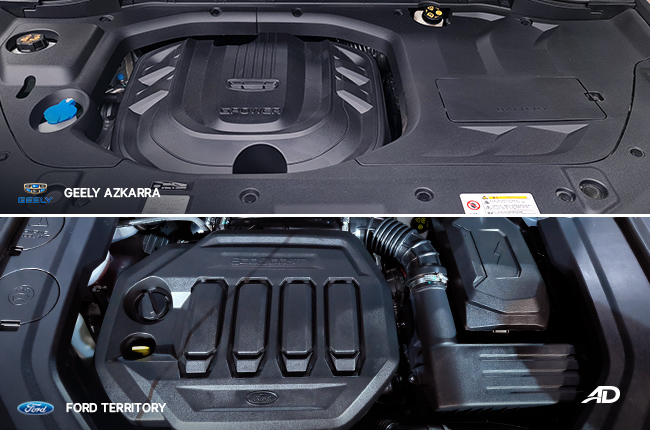 These crossovers feature the same front-wheel-drive setup and the same engine displacement yet dissimilar in terms of power figures. The Azkarra packs more power than the Territory, with its 1.5-liter 3-cylinder turbocharged engine, that puts out a substantial 175 hp and  255 Nm of torque. Being the Premium variant, its mill is then paired with a 6-speed automatic.

The Ford Territory, on the other hand, still produces quite a good amount of power. 1.5-liter turbocharged EcoBoost engine is able to produce 141 hp and 225 Nm of torque, for the record, these are still good numbers. Its engine is then paired with a Continuously Variable Transmission (CVT) which enables smooth acceleration.

The Geely Azkarra seems to have the perfect engine and transmission combo, allowing its drivers to experience that immediate and smooth acceleration. Don’t get us wrong, the Territory is still a nice crossover to drive, it’s just that the Azkarra pack more substantial power that’s quite handy during overtaking situations, even if it is running a 3-cylinder motor. 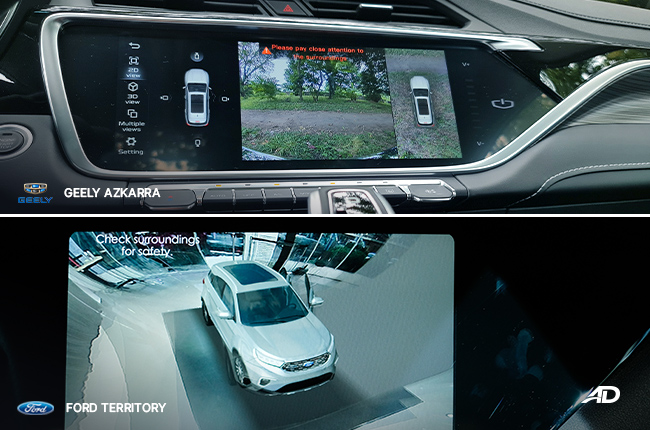 Both compact crossovers shine in terms of safety and security. The Geely Azkarra Premium comes standard with the following — ABS with EBD, traction control, stability control, and a total of 6 airbags, including the driver, passenger, side, and curtain units. While the Ford Territory comes standard with ABS with EBD, stability control, and hill launch assist.

Equally, both models have front and rear parking sensors and the aforementioned 360-degree camera. Notably, the Territory Titanium+ benefits from a tire pressure monitoring system and the brand’s Co-pilot safety suite of features.

The Ford Territory claims to be safer on this round, as it goes beyond conventional equipment all thanks to Ford’s Co-pilot safety suite of features which ensures convenience and that ultimate safety experience for both the driver and its passengers. Beyond specifications, both rides are indeed impressive in their own way. In terms of value, the Ford Territory does standout. At just P1,299,000 this compact crossover gives you almost all the bells and whistles you’d expect on modern cars. That said, the Territory does give customers that well-balanced offering of looks, features, and performance.

As we said, the Geely Azkarra carries the winning recipe of the brand, and it does deliver as well in terms of the said factors. At only P1,438,000, the Azkarra gives you the classy looks, the upmarket feel of its interior, and the needed performance you’ll need for your journeys. It’s really just a matter of choice, and you can only come up with this by properly assessing your needs and knowing your personal taste.

If it were to boil down between these two models, however, extra refinement can be had with the Geely, but that is not to say that the Territory pales in comparison to it. Just like the price points, these two cars are very close in terms of overall experience. Determining whether the extra refinement is worth that jump in price should be the main consideration. Though, we cannot deny that you do indeed get what you pay for no matter what to go with. So this head to head ultimately ends in a tie. You can’t go wrong with either.