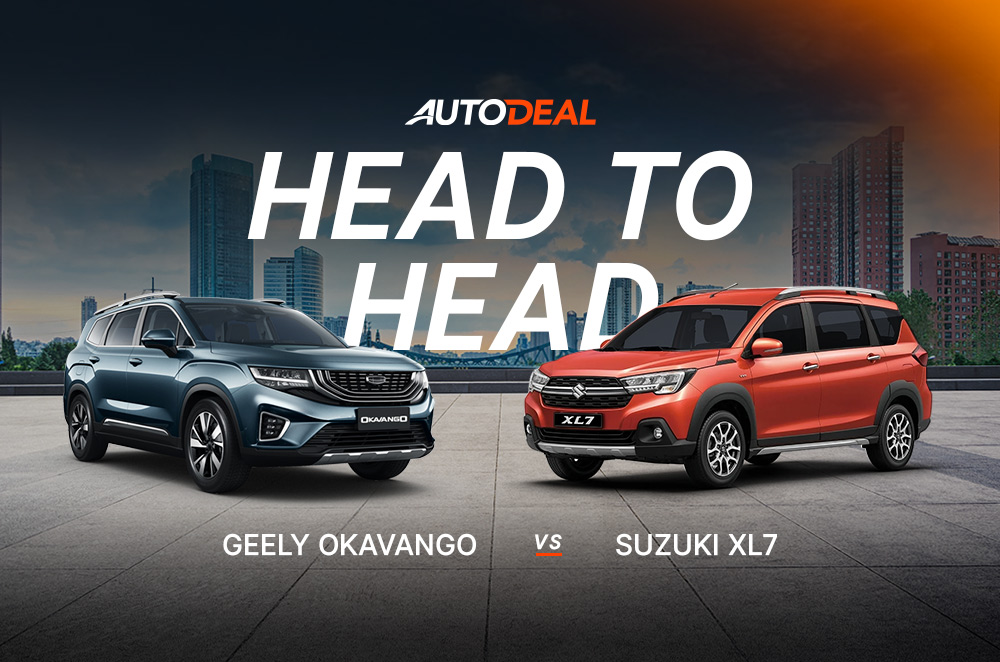 The MPV segment has been continuously expanding. Gone are those days when buyers only rely on established nameplates such as the Innova and Avanza. Today, the competition is filled with new entries, take the Geely Okavango and Suzuki XL7 as great examples. Both models exude in terms of value, through offering that seven-seat capacity with decent performance and a range of features. That said, we shall then compare and see if which of these two deserves your hard-earned money.

This head to head battle shall go by the sole GLX AT trim of the XL7 versus the entry-level 1.5 AT Comfort of the Okavango to keep things closer in terms of price and features. So without further ado, let’s proceed. On the outside, both vehicles are certified standouts, with the Okavango having clean and well-pronounced lines throughout its boxy dimensions while the XL7 looks a bit more outdoorsy given its chunkier black cladding. You notice the XL7's more youthful and somewhat sporty look while the Geely remains subtle and less flashy.

Both MPVs get LED headlights, Daytime Running Lights (DRLs), and blinkers on each side mirror. The Geely Okavango comes with front and rear LED fog lights, while the Suzuki XL7 only has front halogen fog lamps. As for the wheels,  the Suzuki XL7 is fitted with 16-inch alloys wrapped in 195/60 tires, while the Okavango Comfort gets larger 17-inch rims paired with 215/60 rubbers.

Both vehicles are undeniably desirable on the outside. Though given that it’s still a matter of personal preference, we choose the Okavango as the overall winner of this round. Inside, both cabins are blessed with a generous amount of features. While overall execution does seem to be better on the Okavango given the better materials used, the XL7 still is well-built and does feel durable. You get more space in the Okavango given its larger dimensions, especially when comparing the third-row seats of both vehicles.

As for cargo area, the XL7 gives you 550 liters of space, fold the second-row seats and numbers are increased to over 800 liters. The Okavango, on the other hand, does seem colossal, it comes with 1,200 liters of space with the third row down, and 2,050 liters with all seats folded flat.

Standard convenience features on both models include a push-start button along with smart keyless entry, manual adjustable seats, and steering wheel mounted audio controls. The Okavango gets pure cloth seats while the XL7 gets a fabric and leather combo for its upholstery. As for air conditioning, the Suzuki gets a single-zone automatic while the Geely gets a 3-zone automatic climate control. While air vents on the XL7 are only limited to the first and second-row occupants, the Okavango also gets the same feature for its third-row passengers.

The two feature massive sized infotainment systems, specifically, a 10.25-inch screen for the Geely and a 10-inch display for the Suzuki. Unfortunately, only the XL7 comes ready with Apple CarPlay and Android Auto which is a huge plus. The XL7 also gets more speakers, with it having a total of six while the Okavango Comfort only has four.

It’s quite difficult to decide on which among the two succeeded this category. Being a car buyer, you do have your own preferences, whether you’d prioritize space over tech or vice versa. In this case, there are some features and other notable aspects that are unique to each of these two, that is why we’re ending this round with a tie. In general, the Okavango is more powerful than the XL7. Both MPVs get a 1.5-liter gasoline engine, what’s different though is that the XL7 has a non-turbo four-cylinder while the Okavango has a turbocharged three-cylinder, plus, it’s also paired with a 48-volt electric motor, therefore, making it a mild-hybrid vehicle.

Going over the numbers, the XL7’s engine produces 103 hp and 138 Nm of torque, it is then paired with a 4-speed automatic transmission. The Okavango’s engine, on the other hand, churns out a healthier 190 hp and 300 Nm of torque, its mill is mated to a 7-speed wet DCT.

Given its modern and more powerful engine, the Okavango, once again, dominates this round. Though, for the record, the Suzuki XL7’s engine still delivers that needed performance along with fuel efficiency despite it being short in terms of power figures when compared to the Geely. Safety equipment on both vehicles almost became equal, but since the Okavango Comfort does come with an additional tire pressure monitoring system, then it, once again, takes the crown. Still, the XL7 did impress us with its overall list of safety features, it’s just that the entry-level variant of the Okavango gave out a special bonus. 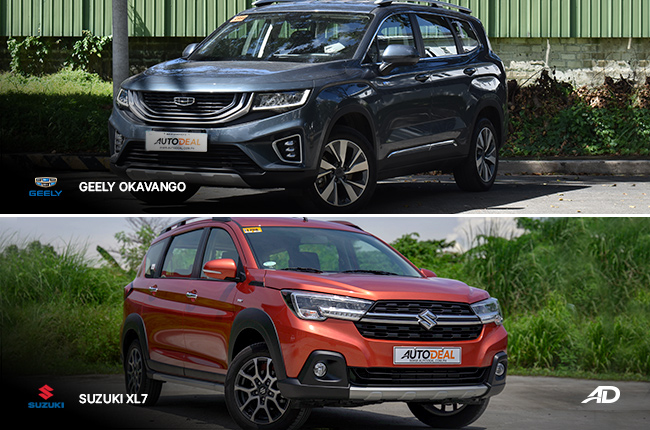 The XL7 does appear to be more affordable even when compared with the entry-level variant of the Okavango, with the sole GLX AT variant of the Suzuki retailing at P1,073,000 while the Okavango Comfort is tagged at P1,208,000. That’s about a P135,000 price gap between both models.

Given its more affordable pricing, the XL7 wins this round. Then again, the Geely Okavango does offer quite a lot compared to the Suzuki, making that additional P135,000 well-justified. Admittedly, both vehicles do differ so much in terms pricing and size. Like what we always say, it really is just a matter of properly assessing your needs and wants under a certain budget. While the two may be one of the most desirable offerings in the market today, we’d have to declare the Geely Okavango as the first placer of this comparison for winning almost all of the enlisted categories.

If you're capable of extending your budget a little bit more, then the range-topping Okavango Urban is the way to go. Now, if you’re a bit short, then you could either opt for the Okavango Comfort or the more affordable Suzuki XL7 which does give a great value proposition. With all that said, you really can’t go wrong with either of these two.