Kia and Toyota have two very different approaches to their respective compact sedans. Kia has opted to give their Kia Forte a more European design with the addition of a turbo, while Toyota has decided to go a different route and went with a hybrid system instead for its Toyota Corolla Altis. Since these two vehicles are very much different, there will not be an overall winner. However, we will still see how they stack up against one another per category. As always this will be a comparison of how well they do against one another in terms of their spec sheets. 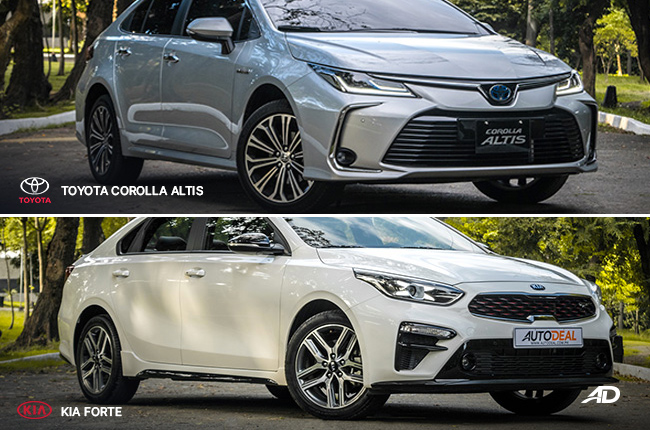 Taking styling out of the equation and looking at what these two vehicles have to offer in terms of exterior kit, both seem to be similarly equipped. The range-topping variants both come with a full LED lighting suite for the front and for the rear. However, while the Kia Forte only comes with one projector LED as its main headlight, the Corolla does it better by bringing in two LEDs into the equation. This gives Toyota a slight advantage over its South Korean counterpart.

The Kia Forte, however, has a trick up its sleeve bringing with it red accents for its GT variant, which adds to its overall sporty look. It also comes with a body kit as standard for its range-topping model, which also gives it a glossy black lip spoiler.

Overall these two vehicles have different approaches. One goes for the sporty theme while the other goes for the more serious futuristic look that further emphasizes the hybrid technology it can have under its hood.

For this category, both vehicles are evenly matched making it harder to decide a clear winner from the two. Thus it all boils down to personal taste in styling. If you want to get a more athletic-looking vehicle then the Kia Forte is your go-to choice in this comparison. However, if you want a more futuristic look then the Toyota Corolla Altis is your go-to choice. On the inside, the Kia Forte comes with a great choice of execution for its cabin materials. While there are glossy black plastics present in the vehicle, these are used sparingly. The leather material used for the seats is soft yet resistant enough to bolster you when spirited driving comes into play. The button layout for the controls is clustered logically, and the addition of the red stitching on the GT variant gives the interior a nice flair to it.

The cabin of the Toyota Corolla Altis comes with a rather safe and average layout. Quality materials are present in the vehicle, however, it does boast scratch-prone black plastics on the dashboard and around the gear lever. Other hard plastics can also be around the interior which could give it a “tacky” appearance for the picky buyers. Storage is excellent in the Corolla as there are multiple cubbyholes to place items. Where the interior shines, however, is with the use of soft leather on the upper dashboard, door cushions, and console box cover. All in all, these make sure that you are comfortable while driving the vehicle.

For having a sportier appearance and for having a better interior layout the Kia Forte takes the win for this category. The addition of the flat-bottom steering wheel for the vehicle also helps add to its sporty theme. When it comes to the technology inside the vehicle, similar to their engines, two different approaches were taken. The Forte gets an 8-inch infotainment system that comes with tactile knobs and buttons. The head unit is responsive and proceeds to do what you want it to do with minimal lag. It also comes with Android Auto and Apple CarPlay as standard. As smartphone integration is a big thing now, this is a major selling point, especially for the modern age.

The Toyota Corolla Altis, on the other hand, goes at it with a different approach. It comes with a smaller infotainment system that works well. However, it does come with rather large bezels on the side, making the unit seem smaller than it is within its enclosure. It does come with Bluetooth and AUX input as standard. It also comes with a smartphone mirroring program. However, it is important to note that this might be a bit difficult to use and set up, especially for first-time users.

While both vehicles do have smartphone mirroring capabilities, we have to give the win to the Kia Forte as it has Android Auto and Apple CarPlay support. When it comes to safety, the Toyota Corolla Altis has the edge in this category. Thanks to the addition of the Toyota Safety Sense, the Japanese sedan comes with more features that assist the driver and make the vehicle safer. The safety suite comes with adaptive cruise control, pre-collision system, lane departure alert, and lane-keep assist to name a few. The Toyota Corolla Altis also comes with seven airbags, ABS with EBD, ISOFIX child seat tethers, seat belt reminders, and electronic stability control as standard for its model range.

The Kia Forte, on the other hand, comes with a full set of airbags for its GT variant along with ABS with EBD, electronic stability control, hill start assist, and ISOFIX tethers. Lower variants only get access to dual front airbags and lose out on the stability control and hill start assist. While not as impressive as its Toyota counterpart it does put the Forte on par with the industry standard.

For its impressive safety suite of technology, the win goes to the Toyota Corolla Altis as it comes with more features. These features not only make the vehicle more comfortable to drive but also make it safer and help the driver avoid collisions whenever possible.

For power, again, both automakers took two different routes. Kia went with a 1.6-liter engine with a turbocharger for the top of the line Forte giving the vehicle more power to match its sport-oriented theme.

Toyota on the other hand chose to go a different route emphasizing fuel efficiency instead of outright power. Its 1.8-liter hybrid system promises to give you the most your fuel can give you without you having to constantly return to the gas station. With its battery pack and electric motor, the Corolla Altis in its hybrid variant can even run on electric-only mode. This not only makes the vehicle more fuel-efficient (it doesn't use any fuel in this mode) but it also makes it more environmentally friendly as it putters along in silence in EV mode without emitting harmful gases. The Kia Forte pushes out 204hp and 256 Nm of torque from a turbocharged 1.6 gasoline engine. It sends power exclusively to the front wheels via 7-speed dual-clutch automatic transmission. It is important to note that the Forte can only be had with an automatic transmission, unlike its Japanese counterpart.

In its naturally aspirated form, the Forte pushes out 126hp and 155 Nm of torque. Like its turbo variant, it too can be had with a dual-clutch transmission. The Toyota Corolla Altis in its hybrid form pushes out 121hp and 207 Nm of torque. Unlike its South Korean counterpart, it sends power to the front via a continuously variable transmission (CVT). While this Japanese sedan does not have a turbocharger assisting the engine it does come with an electric motor which does give it the get-up and go it needs for city driving.

In its naturally aspirated form, it pushes out 121hp and 153 Nm of torque. It shifts gears via either a 6-speed manual or a CVT. This puts the Corolla Altis at a 5hp and 2 Nm of torque deficit compared to its South Korean rival.

For this category, we will give it a tie. There are merits to having more power under the hood, however, we can’t deny the fact that hybrid technology is more efficient. Not only does it make the most out of your fuel but it also comes with an electric-only mode giving you a quiet and eco-friendly means of transportation up to a certain point.

With that reasoning again it's down to personal preference if you want more power, then the Kia Forte could be the vehicle for you. However, if you want to make the most out of your fuel and be environmentally friendly on the side then the Corolla Altis could be the one to be placed on your shortlist. When it comes to pricing the Kia Forte comes with a more premium price point. It starts at P1,095,000 for its entry-level LX variant and goes all the way to the P1,650,000 for the top of the line GT variant that comes with the turbocharged engine.

For Toyota, on the other hand, the Toyota Corolla Altis 1.6 E starts at P999,000 which not only gives it a price below P1 million but also makes it the more affordable vehicle out of the two. For its hybrid variant, the Japanese sedan can be had for P1,580,000 for its regular colors. If you want to get it in the Pearl White paint job expect it to add an additional P15,000 to the total price of the vehicle.

With the ability to reach more people thanks to a more affordable price range for all of its variants the win goes to the Toyota Corolla Altis. Not only does it come with an entry-level variant priced below P1 million but it also comes in with a P70,000 difference between its range-topping model than that of the Forte. 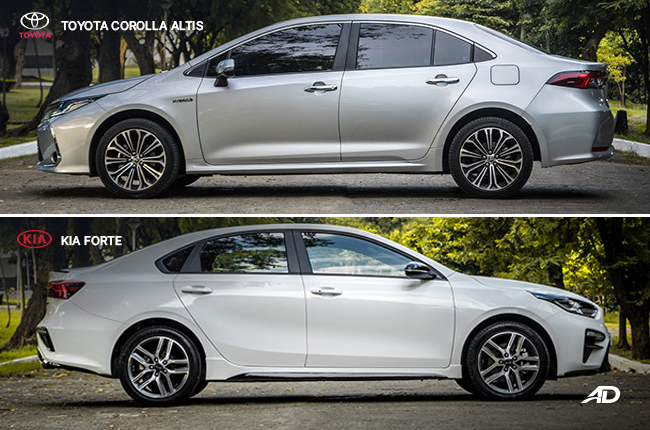 If you want a European-styled car that comes with a turbocharged engine then the Kia Forte is the sedan of choice for you. Not only does it have more power than its Japanese counterpart within its naturally aspirated form it also beats it in its turbocharged variant.

However, if you want a Japanese sedan with fuel efficiency in mind then the Toyota Corolla Altis is for you. It may not have the newest engines or the most powerful, but it does deliver well in terms of fuel economy. Despite it being down on power its 1.6-liter is more than enough to get the car going. Opt for the hybrid variant and you’ll see double-digit numbers for the city in hellish traffic thanks to its battery pack and electric motor.

If you want to get your hands on either of these wonderful vehicles today then we highly suggest utilizing our Buy Online feature. Not only will it make your process of buying a car, go smoothly but it will also make it an easier experience.