The crossover segment is highly contested, you have established nameplates such as the Ford Territory and the Geely Coolray which have cemented a good chunk of the market for themselves. However, there are new challengers out there that wish to change the status quo and want to shake up the crossover segment with what they can offer.

Two examples of the new age challengers are the MG ZST which is an upgraded form of the MG ZS and the new Honda HR-V which originally started in this segment back when it wasn’t yet turbocharged. As these two versions of these crossovers now come with turbochargers and are competing within the same segment, we thought that it would be interesting to put them against each to compare their specs and to see which one will come out on top. When it comes to the styling of these two vehicles they are different in the sense that their design languages go in two separate directions. The MG ZST comes with a much rounder face but with a sporty undertone underneath which is aimed at a younger audience. The Honda HR-V, on the other hand, goes with a much flatter front fascia but with a more premium and more mature feel.

While these two are essentially newer versions of their previous iterations you can see the stark improvement in design. The ZST is an upgrade from its predecessor the ZS and takes on many of the same design elements to incorporate it with its current design. The HR-V, on the other hand, takes on an all-new appearance with its bigger grille and sleeker headlights.

Overall, deciding which of the two looks better boils down to personal taste. With that said, we give this category a tie. In a similar way that the ZST comes with a sporty exterior design and the HR-V comes with a more premium look and feel, the cabin of these vehicles reflects the same sentiments. The MG crossover comes with loud red accents found throughout the interior, with the accents found on the vents and the seats being the highlights. While the material of choice is predominantly plastic there are soft-touch materials found in the cabin. You can tell at a glance that this crossover comes with a more youthful look to its interior that may not appeal to older drivers who want something a little more plain and simple.

This is where the HR-V comes with as it has a more minimalistic cabin that is similar to what is found in its Civic brother. There aren’t too many loud accents found in the car as the vehicle is carefully designed to prioritize function over form. All of the controls are easily within reach and are very easy to use. The materials are also of a higher quality which is great considering its more upmarket price point. 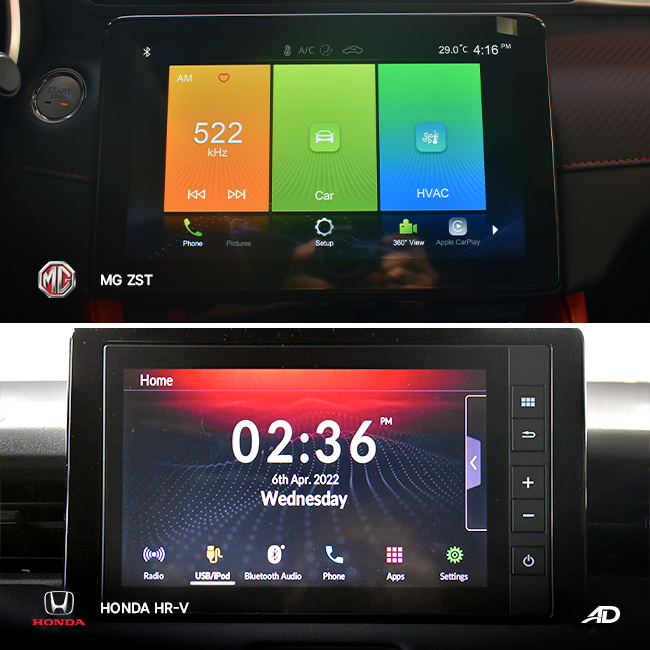 Overall, the HR-V wins this category as its interior is better executed and everything feels more premium. However, if you want a more youthful car for your daily driver then there is nothing wrong with getting the ZST, but the HR-V still gets ahead thanks to its material quality. In terms of technology, both of the crossovers are similarly equipped. The Honda HR-V comes with four airbags, while the MG ZST comes with six. Both vehicles also come with the industry standard for safety coming with ABS with EBD, a traction control system, and a vehicle stability program as well.

The HR-V, however, has a big advantage over its ZST rival as it comes with the Honda Safety Sense system which includes lane departure warning, lead car departure notification system, collision mitigation braking system, road departure mitigation, adaptive cruise control with low-speed follow, auto high beam, and lane keeping assist. This makes it safer and easier to use daily as well.

With that in mind, we give the win to the Honda HR-V as it comes with a better set of safety technology despite losing out with just four airbags instead of the six that are found on the MG. 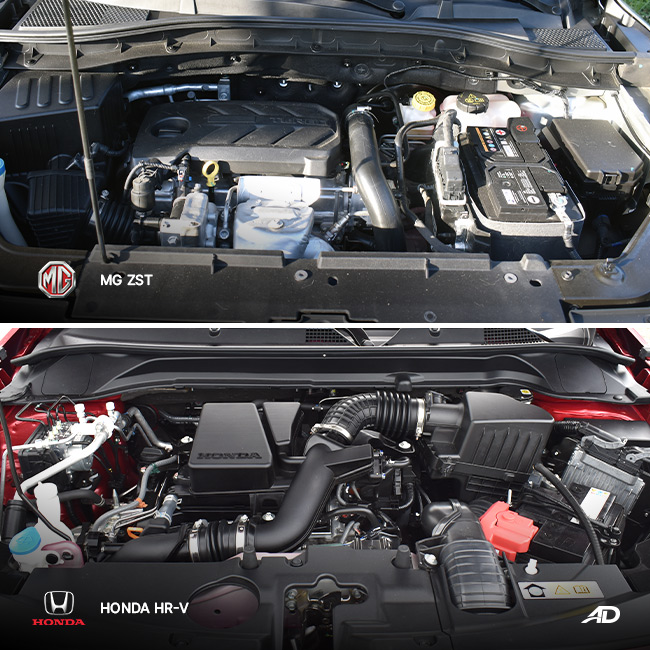 Under the hood, both of these crossovers come powered by turbocharged engines. The ZST has a 1.3-liter 3-cylinder motor that produces 161hp and 230 Nm of torque. Meanwhile, the Honda HR-V is powered by a 1.5-liter 4-cylinder powerplant that produces 174hp and 240 Nm of torque. As far as transmissions go, the MG crossover has a 6-speed automatic gearbox, while the Honda crossover has a CVT. This represents about 13hp and 10Nm of torque difference between the two.

While the HR-V does produce more power than the ZST, we have to commend the MG crossover for producing almost the same amount of power with one less cylinder, with that in mind we will give the win to the ZST. When it comes to pricing, these two vehicles are on near opposite sides of the spectrum, the cheapest version of the HR-V is priced at P1,250,000 which is already more expensive than the sole variant of the ZST which is priced at P1,158,000. This already represents a P91,112 difference between the two. This difference further increases when you compared it with the top-of-the-line HR-V which costs P1,598,000.

With that being said, the clear winner goes to the MG ZST as it is the cheaper of the two crossovers. However, we do have to acknowledge that the HR-V comes with more premium materials and tech that are definitely worth paying more for, but for the sake of this comparison, we will only take into consideration the price. 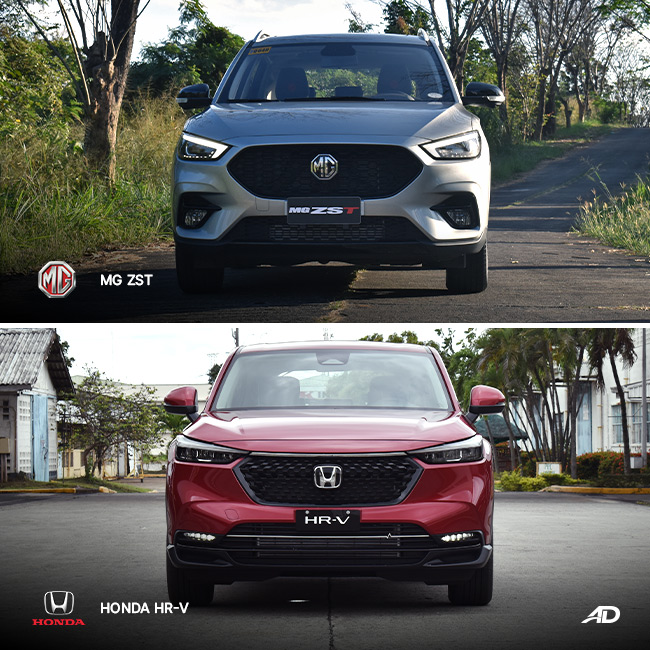 The MG ZST and the Honda HR-V represent two different approaches to crossovers, one is more refined, while the other is more youthful and sporty appealing to a younger audience. These are also two unique ways to separate themselves from the established players in the segment which work on these two angles well.

That being said, choosing between the two ultimately boils down to personal taste and budget, if you can afford the HR-V, then go for it as it will reward you with a refined driving experience and well-executed set of features that you will surely enjoy.

However,  if your budget can’t stretch to get the Turbo version of the HR-V, then the MG ZS-T is a good alternative. It comes with many of the same features, has a peppy engine, and looks youthful and sporty at the same time. It looks good and works well, but lacks a bit of the refinement that the Honda has.

That said, the overall winner of this comparison goes to the Honda HR-V. Sure, it's the more expensive of the two, but you do get what you pay for and the safety technology that it carries is well worth the investment.