The MPV segment in the Philippines is a highly contested one with many rivals sprouting out to dethrone one another from the hot seat. The Mitsubishi Xpander is a veteran of the segment and has been around for quite some time now. It recently got refreshed which gave it a fresh new look along with a few minor tweaks to its interior and feature set.

The Maxus G50, on the other hand, is a new kid on the block that wants to challenge the status quo by offering you a whole lot more for a whole lot less compared to its key rivals. These two make for an interesting comparison as they are both within the same segment and are within the same price bracket as well. With that in mind, we will compare these MPVs specs for specs to see which one will come out on top and to see which one you should buy if ever you decide to purchase one. On the outside, both vehicles take different approaches to their designs. The Maxus goes for a more minivan-like look with a sleeker front end and wider yet flatter proportions towards and side and the rear. The Mitsubishi on the other hand doubles down on the SUV aesthetic with its new updated dynamic shield design language.

In terms of exterior features, they are on par with one another as both come with LED lighting for the higher variants and halogen projectors for the lower variants. In terms of wheel size, the Xpander does come with a slight edge as it has bigger 17-inch wheels. It is important to note that the Maxus is the bigger of the two and is longer by a substantial amount compared to its Japanese rival.

With that in mind, for this category, we give it a tie as the looks of the vehicle all boil down to personal preference. However, we do have to note that the Maxus G50 is the bigger of the two and thus will give you more interior space. Out of the two here, the Mitsubishi Xpander is the only one to get a refreshed interior. The Japanese automaker has decided to give the vehicle more horizontal accents inside the cabin along with more space inside the cabin. It's an over-refreshed look for the popular MPV that has been a trendsetter in the market for quite some time.

The young gun in the form of the Maxus G50 takes a different approach with its dashboard coming in with a more complex layered design. It works well to the effect of the vehicle giving it a more youthful look while retaining a premium feel thanks to its selection of materials. 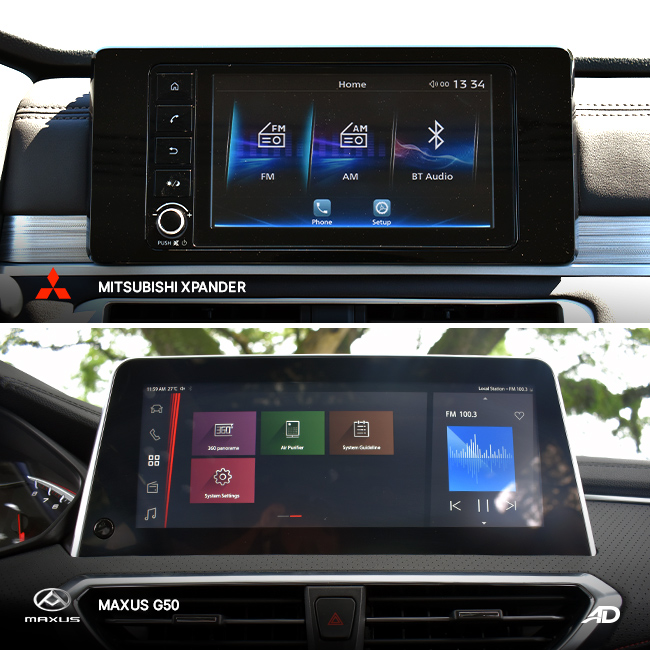 Over on the tech side of things, the Maxus G50 has a bit of an edge in terms of screen real estate as it has a 12.3-inch infotainment system versus the 7-inch head unit that is available with the Xpander. While both vehicles do not come with Apple CarPlay or Android Auto capabilities, they do have Bluetooth connectivity which is great. However, the Xpander does come with a six-speaker sound system similar to the Maxus, along with built-in GPS navigation for its head unit.

For this category, we give the win to the Mitsubishi Xpander as it comes with a more updated dashboard design along with the tech that you will actually be able to use despite not having Apple CarPlay or Android Auto. 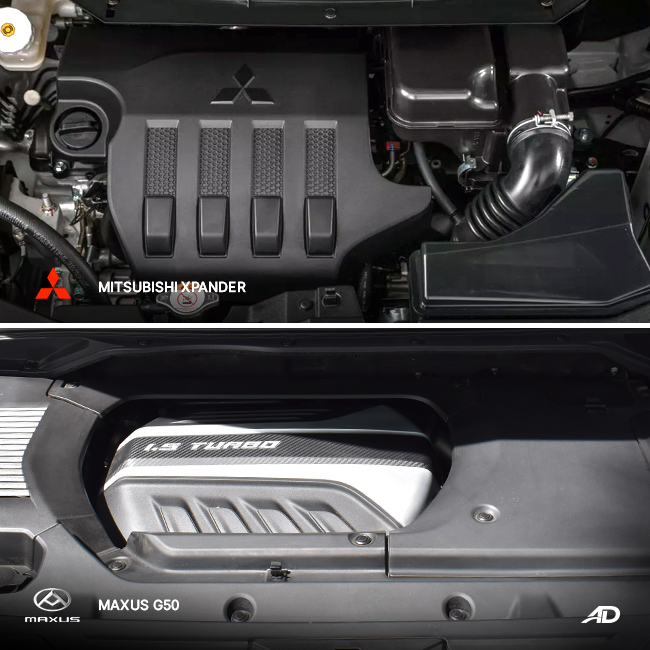 Both of these MPVs come powered by a 1.5-liter gasoline engine. The only difference between the two is that the Maxus comes with a turbocharger and the Mitsubishi is naturally aspirated. The Xpander produces 103hp and 141 Nm of torque, while the G50 makes 167hp and 250 Nm of torque. The Mitsubishi MPV shifts via a 4-speed automatic, while the Maxus MPV shifts via a 7-speed dual-clutch automatic transmission.

It is important to note that Maxus G50 does come with a 1.3-liter turbocharged model that produces 150hp and 230 Nm of torque. This time, however, it is mated to a 6-speed manual transmission. With that in mind, we award the win to the Maxus G50 as it delivers more power from both of its engine options. However, just keep in mind that while on paper the G50 is the more powerful car, this does not mean it's the most fuel-efficient out of the two, so best to do your research first before you decide to buy. In terms of safety features, both vehicles are on equal footing. Both vehicles come with six airbags for their top-of-the-line models along with a slew of standard safety features such as ABS with EBD, parking sensors, and a reverse camera. Where they differ is that the Maxus G50 comes with a 360-degree panoramic view camera that helps you with maneuvering such a large vehicle. With that in mind, it does get an edge over the Xpander in this regard. It also helps that the G50 also has a tire pressure monitoring system as standard for all of its variants which is a great feature to have.

So, in terms of safety, we give the win to the Maxus G50 as it comes with more useful features that a novice to an experienced driver will appreciate. It also helps that its line of safety technology also aids in making the car more maneuverable despite its larger size. While the Maxus does come with an entry-level model that costs sub P1,000,000 it is a bit under specced for what it offers and does not even come with a touchscreen infotainment system. It may seem like a bargain but you do get what you pay for in terms of price.

With that said, we give the win to the Mitsubishi Xpander for a better variant range and being the more affordable option between the two. The Mitsubishi Xpander and the Maxus G50 both present great cases to buy them. The Xpander is a tried and tested nameplate that has been around in the MPV segment for quite some time now. While it recently got a new look and a few extra features, we do wish they could give it access to Apple CarPlay and Android Auto. Even if it still comes with the four-speed automatic transmission from the previous version it's still proving to be the right choice thanks to its stellar fuel economy.

However, the Maxus G50 presents itself to be a strong contender in this segment as it comes with all the right tech that many younger buyers will want. While we do wish it had Apple CarPlay and Android Auto its rich feature set is one we can’t deny. It is the cheaper of the two vehicles but only marginally so. This in turn makes it hard to choose between the two since they are so closely priced.

Ultimately, we give the win to the Maxus G50 as it states a case for itself for being the more innovative of the two. It challenges the status quo and shows customers how much more you can get in terms of tech, safety, and power for just a little bit more money.