The Suzuki S-Presso and the Toyota Wigo, two small hatchbacks that cater to those who want a basic and affordable transporter. Both vehicles sit below the P600,000 price range, namely for the sole variant of the S-Presso which is the GL MT and the base 1.0 E MT of the Wigo, whereas the rest of its trims retail above the said price range. These Japanese contenders are good in their own way, but which among the two is ahead of their game?

That in mind, we shall be comparing these small hatchbacks in the respective variants mentioned given the close price range plus, both have manual transmissions making this a good competition.

Disclaimer: The Toyota Wigo shown on the following images is the 1.0 TRD S AT variant. Frankly, there’s not much to talk about on the exterior as both models look simple yet they don’t offend. In terms of dimensions, the Wigo E is slightly longer and wider, while the S-Presso stands taller than the Toyota. Dimensions-wise Toyota Wigo E stretches by about 3,660mm, has a width of 1600mm, standing 1,520mm, and has a wheelbase of 2,450mm. The Suzuki S-Presso, on the other hand, has a length of 3,565mm, 1,520mm in width, 1,565mm height, and a wheelbase of 2,380mm.

Standard exterior features include body-colored accents and halogen headlamps. Notably, only the Wigo E gets project units along with an LED line guide and LED taillights. While only the S-Presso gets a good amount of black cladding and a spoiler.

As for shoes, the Wigo E gets a set of 14-inch alloys wrapped in 175/65 tires, while the S-Presso gets a set of 14-inch steel wheels with hubcaps, which are then paired with 165/70 tires. Exterior-wise, both vehicles are well-presented in their own way, however, we’d have to give the Toyota credit for treating the Wigo with more exterior appointments than the Suzuki. Both interiors are utilitarian, and that’s probably something you’d already expect at this price point. The Toyota Wigo and Suzuki S-Presso are good in terms of cabin space, the S-Presso, however, falls short in terms of cargo space, with it having a default cargo capacity of 239-liters versus the Wigo’s 422-liters. Standard features include fabric seats and a manual climate control. The Wigo E gets a more basic 2-DIN headunit while the S-Presso comes with a 7-inch touchscreen. Both head units feature various multimedia functions including AM/FM, AUX, and Bluetooth. One thing worth noting though is that the Wigo gets power windows on all four doors while the S-Presso only gets the power function upfront, with the rear having manually-operated ones. Another special thing about the S-Presso is its digital gauges that are located at the center of the dash. The Wigo, on the other hand, still gets the traditional gauges.

From the exterior up to the interior, the Wigo E does present a better package making it the winner of this round. Still, we’d had to give Suzuki credit for giving the S-Presso some special touches like the digital gauge cluster and the more modern touchscreen infotainment system. Both cars are run by a 1.0-liter 3-cylinder gasoline engine, the one on the Toyota Wigo E produces 65 hp and 89 Nm, its mill is paired with a 5-speed manual transmission. The Suzuki S-Presso, on the other hand, is a bit mightier with 67 hp and 90 Nm of torque. Like the Wigo E, the S-Presso’s engine is mated to a 5-speed manual.

Given the slightly greater power figures of the S-Presso, we declare it as the winner of this round. Standard safety and security on both vehicles include dual-front airbags, child-seat tethers, anti-lock braking system (ABS), keyless entry, and rear parking sensors. Notably, the S-Presso gets nifty additions including child seat anchors and an immobilizer. However, when it comes to the ASEAN NCAP ratings of both vehicles, the Wigo was able to outshine the S-Presso with its 4-star rating.

Given the extra equipment of the Suzuki S-Presso and the higher ASEAN NCAP safety rating of the Toyota Wigo, we shall end this round with a tie mar 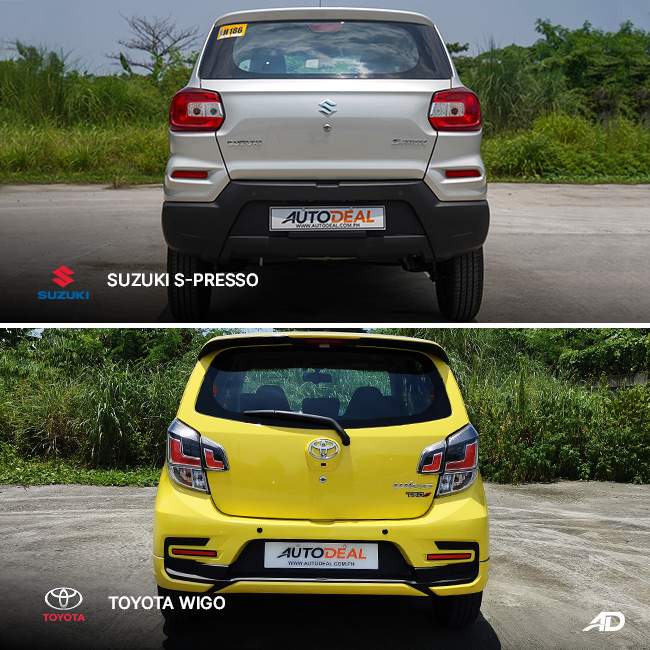 The Suzuki S-Presso serves as the more affordable car in this comparo, with it retailing at only P523,000 versus the Wigo E’s SRP of P568,000. The two small cars exhibit a good value proposition. Each one has its own pros and cons, therefore, as a buyer, you must solely identify your needs and wants in order for you to choose between these two. After carefully assessing the different aspects of each vehicle, both the Suzuki S-Presso and Toyota Wigo E ended this battle with a tie mark.

So have you made your decision yet? If yes, then, don’t hesitate to click on the ‘Get Quote’ button—it’s absolutely free. You could even request for a test drive so you would know what you’ll like about it, first hand.