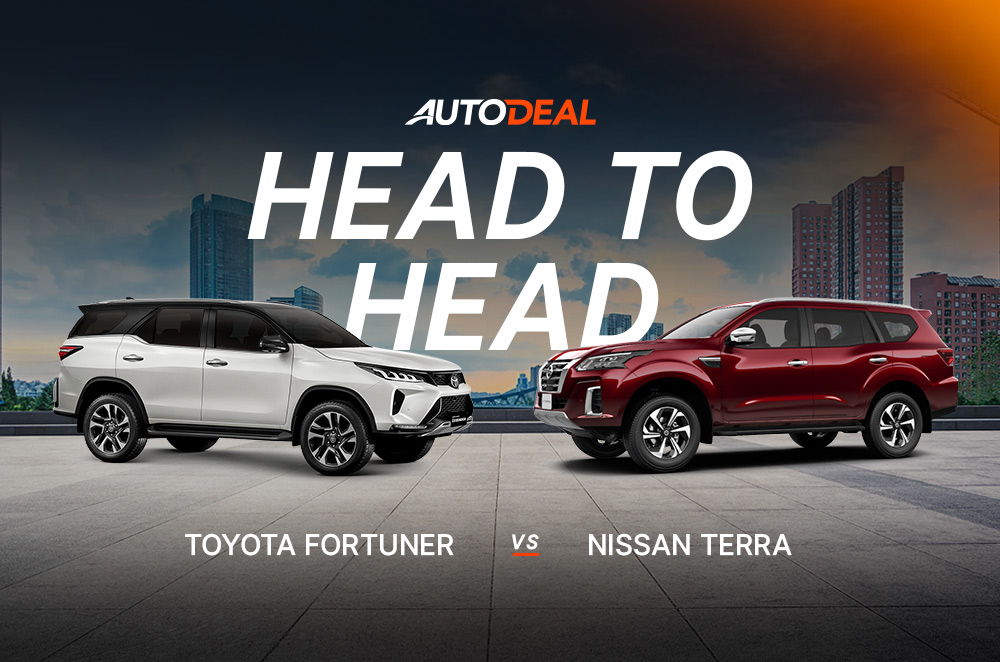 Apart from MPVs, Midsize SUVs also remain as one of the top choices of Filipino families, given its 7-seat layout that’s infused with capable DNA. You simply get the best of both worlds, and that is, perhaps, why the local roads are flooded with this type of vehicle. Notably, its respective segment has become quite competitive, with automotive brands stepping up and rendering some refreshed or even all-new models just to retain their prominence in the market. Take the Toyota Fortuner and Nissan Terra as examples, two greatly renowned models of which have gone through the refresh phase.

Undoubtedly, both are already potential competitors in its segment, but now these SUVs have stepped up in several aspects. So by comparing the new Fortuner and Terra side by side, who do you think will come on top? Bear in mind that the updated Terra or also known as the X-Terra is not yet available locally, so the specifications elaborated within this comparison is purely based on the Middle Eastern specced vehicle. So without further ado, let’s proceed, shall we? 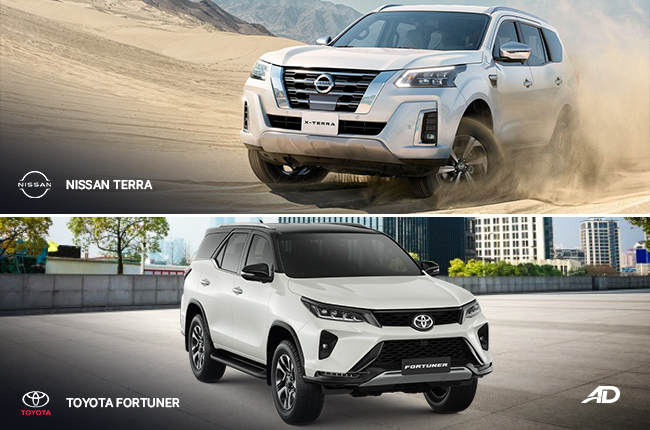 Generally speaking, the Nissan Terra seems boxier while the Fortuner’s has got more curviness into it. Starting off with the Toyota, it gets a revised fascia, which may actually vary depending on the variant you get. LTD trims get more black details upfront, giving the Fortuner a more imposing look to it. The lighting system also sports an all-LED affair including the split-type headlamps, fog lamps, and the integrated turn signals on the bumper. Other special details on the LTD include the blacked-out roof and side mirrors, its rims also feature a different design, therefore, measuring in 18-inches and are then wrapped in 265/60 tires.

Other succeeding variants, on the other hand, have a more clean look. Specifically, the Fortuner Q and below feature an identical face which may differ on the lighting system and the following embellishments on the fascia. While the bi-beam LED headlamps and DRLs remain standard across the range, the fog lights were then removed from the G trims and the LED turn signals on the bumpers are then replaced with regular bulbs. The aforementioned black details on the LTD are then removed from other succeeding variants as well. Notably, only the Q gets the same wheel dimensions from the LTD, however, designs of both rims do differ from each other, while the rest of the range gets smaller alloys and tires. Lastly, while the rest of the range gets a new set of taillights, the G trims, however, retains the same pair from its predecessor.

Now, onto the new Nissan Terra or rather X-Terra which is actually the nameplate used for the Middle Eastern market. While the rest of its dimensions remain as it is, the length and height have been stretched by a bit, specifically from 4,885 mm to 4,900 mm for the length and from 1,835 mm to 1,865 mm for the height. There are five variants available, and unlike the Fortuner, its entire lineup features an almost identical fascia wherein only a few contrasting reinforcements differ per variant. Standard on the range is also a pair of LED headlights and LED Taillights. The fog lights and application of other chrome embellishments are then made exclusive on the mid-grade Titanium and up. Lastly, only the range-topping Platinum gets the 18-inch alloys while the rest gets 17-inch wheels. To sum it all up, the Nissan Terra’s design has greatly matured over its predecessor, and it should definitely shine more than it should this time around.

Looks are indeed subjective, that’s why the eyes of the beholder shall become the main judge for this round. Even the interior of both vehicles is greeted with notable updates. While maintaining the same layout as before, the Toyota Fortuner gets new bits and pieces which uplifts this new model. While other variants get the simpler yet clean black cabin layout, LTD trims, on the other hand, benefit from a two-tone interior, specifically black combined with some maroon details that are also applied on the leather seats. Like before, the folding mechanism of the Toyota Fortuner’s third-row still remains as it is, with seats attached on each side.

Going over the features, the Toyota Fortuner gets Apple CarPlay, Android Auto, and even Smart Device Link as standard on its infotainment system, whichever size you get, either the 7-inch or the bigger 8-inch display. Notably, LTD variants get the special 9-speaker JBL sound system. Only the G trims are excluded from the automatic air conditioning system while the rest gets it. Gauges are then complemented by two analog units and a centerpiece 4.2-inch multi-information display. Lastly, the power tailgate, keyless start, and smart entry are exclusively available from the V variant and up.

Now, interior changes are quite more evident on the Terra. While the door sidings remain as it is, the dashboard now features a new layout that looks cleaner and is far way better than the one on its predecessor. The steering wheel is also new for the model which is somewhat reminiscent of those found on other Nissan products. The advantage of the new Nissan Terra over the Fortuner is its flat-folding third-row seats, this gives the midsize SUV a more flexible loading space. Plus, it’s also got that one-touch tumble seats for the second row, which is indeed convenient when accessing the rearmost seats.

Keyless start along with smart entry is standard across the range. The largest infotainment screen is measured by 9-inches and it’s exclusive on the range-topping Platinum. Apart from having Apple CarPlay and Android Auto, it also gets paired with an 8-speaker premium Bose sound system. However, it is worth noting that other variants get a smaller screen, while the lower-end ones get a standard radio instead. The gauges are then complemented by two analog units as well, however, its center display is quite large, 7-inches to be exact, for easier reading.

Both models are indeed technologically packed, however, we just can’t help but notice Nissan’s great attention to practicality, as we are captivated by its flat-folding third-row seats and the one-touch tumble feature for the second-row. Overall, the Terra makes a great family vehicle, that’s why we’re giving Nissan the Crown on this round. There are two engine options for the Toyota Fortuner. Respectively, a 2.4-liter diesel that puts out 148 hp and 400 Nm of torque, this particular trim can also be had in either a 6-speed manual or a 6-speed automatic transmission. Next, is the 2.8-liter diesel that churns out a healthier 201 hp and 500 Nm of torque. The larger powerplant is exclusively paired with the aforementioned 6-speed automatic transmission.

For the Middle Eastern market, the Nissan Terra or X-Terra is motivated by a gasoline motor, specifically a 2.5-liter engine that’s paired with a 7-speed automatic. Since that’s unlikely to be launched here, perhaps Nissan Philippines might retain the same 2.5-liter turbo diesel which is found on its predecessor, therefore, producing 190 hp and 450 Nm of torque. The said mill is then paired with a 7-speed automatic.

For this round we’d have to give the crown to the Fortuner, given its flexible engine options, therefore giving buyers the choice between a mild and more spirited motor. Perhaps, in the near future, we shall find out if the Philippine-spec model of the new Nissan Terra can go head to head with the power figures of the 2.8-liter engine found on the Fortuner. Standard safety equipment on both midsize SUVs include airbags, ABS, and immobilizer. Notably, the Fortuner and Terra come equipped with some high-tech driver-assist features. The Toyota Safety Sense package, which is exclusive on LTD variants of the Fortuner, comprises a pre-collision system, lane departure alert, and adaptive cruise control. Additionally, V variants and up also comes with a 360-degree camera.

Like most Nissan vehicles nowadays, the Terra comes equipped with a suite of Intelligent Mobility features which includes intelligent emergency braking, intelligent forward collision warning, intelligent lane departure warning, driver alert assistance, blind-spot warning, and rear cross-traffic alert. Like the Fortuner, it also comes with a 360-degree camera. Do take note that the following equipment is only available on the range-topping Platinum.

For the first time ever, it’s glad to see the Fortuner is equipped with advanced driver-assist features, although in this round, the Nissan Terra has excelled quite well, and we do hope that all these features will soon be made available for our market once it finally launches here. 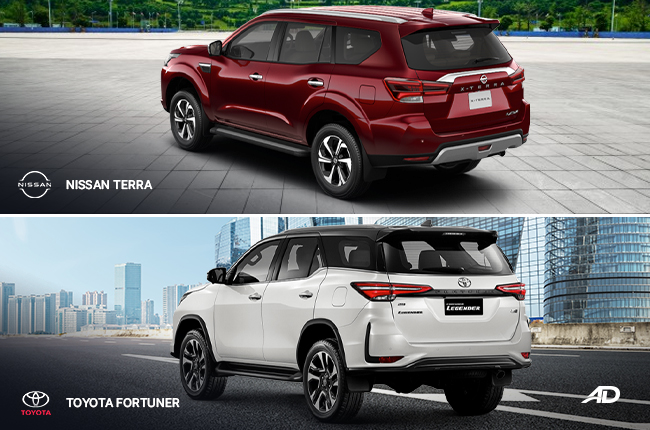 Both vehicles did excel well in terms of looks, features, practicality, performance, and safety, although on paper, the Nissan Terra did withstand the mighty Fortuner given its better approach as to practicality and safety. Let’s just hope that all these aforementioned features will soon be carried over once the new Nissan Terra finally lands here.

While the Toyota Fortuner may have ended up being the second placer, it still is worthy of your consideration. Its pricing ranges from P1,633,000 up to P2,404,000, notably, even the V variant gets a generous amount of features. Apart from having the practicality and performance, you also get that solid reliability from Toyota which is indeed a huge plus for most Filipino consumers out there.

Want to have your vehicle purchased without leaving the comfort of your home? Try our 'Buy Online' feature and just fill-up the necessary details for your online transaction.