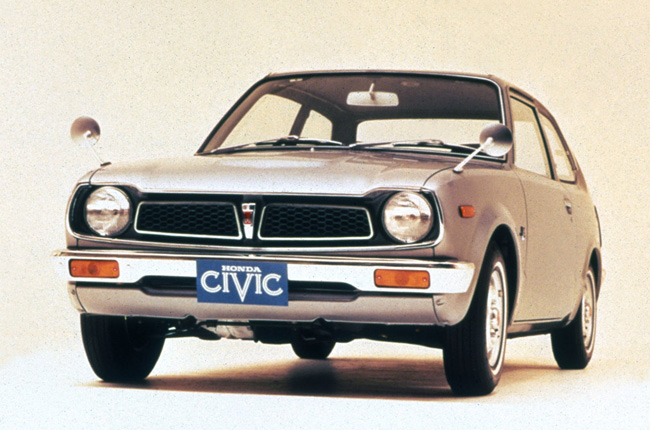 For more than 40 years, the Civic managed to earn the reputation of being a car that combines performance and reliability.  It even placed Honda in the global automotive industry.

With that, let’s take a step back and look at how the Civic has evolved. In 1970, Honda came up with an idea of developing an economic passenger car. Two years later, the brand introduced the 1st generation Civic as a hatchback and a sedan. Both versions look similar to each other but the Civic sedan comes with a trunklid while the hatchback  has an upward-hinged rear window. Under the hood, the first-ever Civic was powered by a 1,169 cc 4-cylinder engine.

A couple of years after, Honda integrated the Civic with minor yet significant updates like a beefier bumper and a refreshed hood design. The 2nd gen Civic was launched in 1980. It grew larger as compared to its predecessor. It was also equipped with a refined CVCC engine. Honda had two engine options for the 2nd gen Civic – a 55 hp 1.3L and a 67 hp 1.5L. For this generation, the brand introduced two new Civic variants – Fuel Economy (FE) trim and Sport (S) trim.

Honda also offered the Civic as a station wagon in 1981 in a single trim level. In 1984, Honda revealed an all-new Civic featuring a major design overhaul. Aside from the new exterior styling, the Civic‘s wheelbase increased by 127 mm.Honda came up with a two-seat fastback coupe dubbed as the Civic CRX. It was in 1984 when the automaker released the high-performance Civic Si for the Japanese market. Then, three years after, the Civic wagon was offered with 4-wheel drive. The 4th generation Civic veered away from the nameplate’s sharp exterior. The exterior design of the Civic was softer and smoother but its available body styles remained the design. Fuel injection engine was now standard on all Civics. Also, Honda fitted the vehicle with double-wishbone suspensions. However, this was the last year where Honda produced the two-seat CRX. Honda unveiled a four-seat, two-door coupe Civic for this generation while the wagon body type was discontinued. This Civic was available with a driver’s – side front airbag. The Japanese automaker also tried to replace the CRX with a new del Sol model. In 2001, the Honda Civic got a new look. It also has a new suspension as the brand switched from double-wishbone to McPherson struts. The vehicle’s new suspension was said to create more interior space and deliver a smoother ride. Under this generation, Honda released the first Civic hybrid. Honda debuted the 8th generation Civic in either a hatchback or a sedan version. It also features a new exterior design, which includes a restyled body, revamped fascia, and redesigned rear. Locally, this Civic was only offered as a sedan. The 9th generation Civic features new headlights, revamped front bumper, and restyled taillights. It is powered either by a 141 hp 1.8L or a 155 hp 2.0L SOHC i-VTEC gasoline engines. Last April, the 10th generation Honda Civic made its Philippine debut. Overall, it has an aggressive, sporty styling. Locally, the all-new Civic is offered in 2 variants: the 1.8 E and the range-topping 1.5 RS Turbo. Of note, the top-spec RS Turbo puts out 173 hp and 215 Nm of torque.

Recently, Honda Cars Philippines Inc. (HCPI) announced the arrival of the 2016 Civic. HCPI claims that they were able to receive more than 1,200 reservations for the 10th generation Civic.

For more information about the Honda Civic, visit the AutoDeal Car Guide.