Here’s a little scenario for you to consider: You’re at the MG dealership, and you’re eyeing a subcompact crossover for you and your family (or just you). You happen to chance upon the ZS, and you’ve heard that it’s a pretty popular car. You look at it and then figure that this is the model for you. It’s well-priced, it has a good amount of interior space, and it’s practical with its 1.5-liter engine.

Then you pace back and forth and spy something that looks eerily similar to it but with a more aggressive look about it. You see an MG ZS T. You wonder what the T stands for, and the agent explains that the T stands for something exciting. So will it be the ZS, or the ZS T? You see the price tags of both cars and think to yourself: “Is the ZS T worth the extra money?” 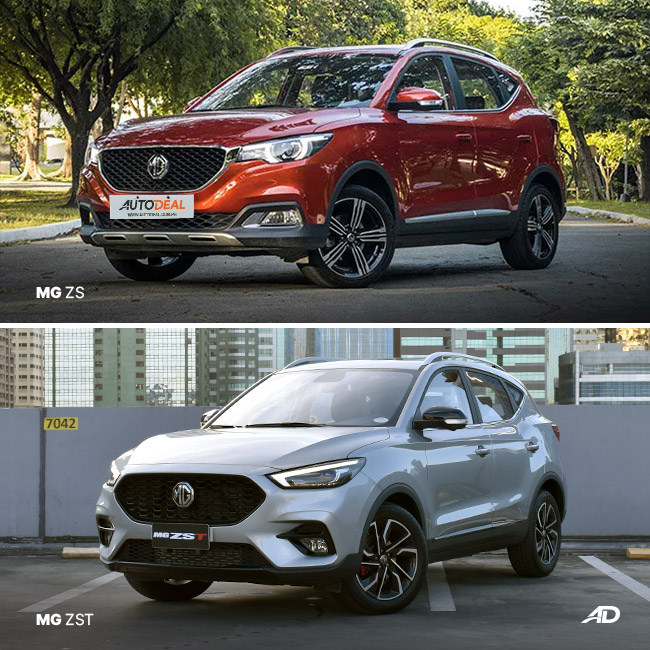 Without a doubt, the ZS T is the nicer of the two siblings. You get a more aggressive look and LED as standard throughout the lineup. The ZS only gets halogen projector headlamps with LED DRLs at the highest trim, plus foglamps. The ZS T gets a full LED set of headlights and DRLs, making it a nice upgrade considering the bump in price. 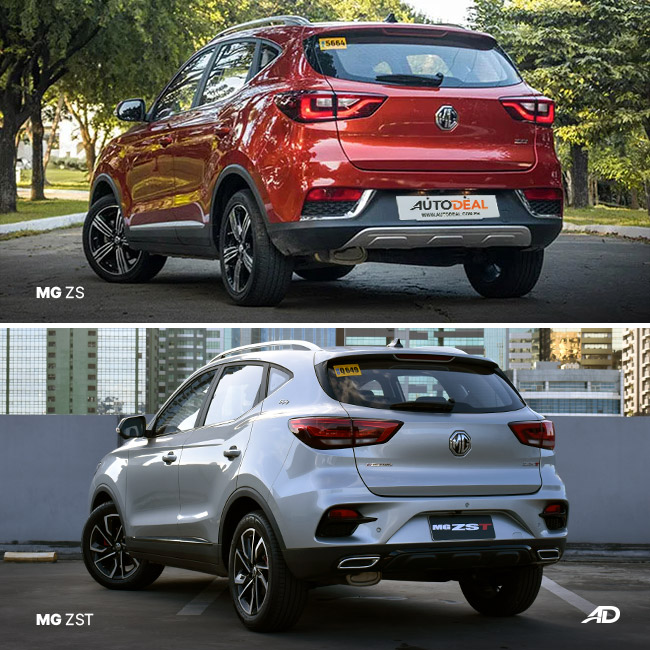 On the other hand, some people may like the more sedate look of the ZS, while others would want something that looks a little more modern as is with the ZS T. There are more cuts, curves, and creases that make it look oh so desirable, but that’s the story for the front and rear ends. The sides look nearly identical to one another, but the rear has a noticeable redesign over the standard ZS with more aggressive-looking taillights. 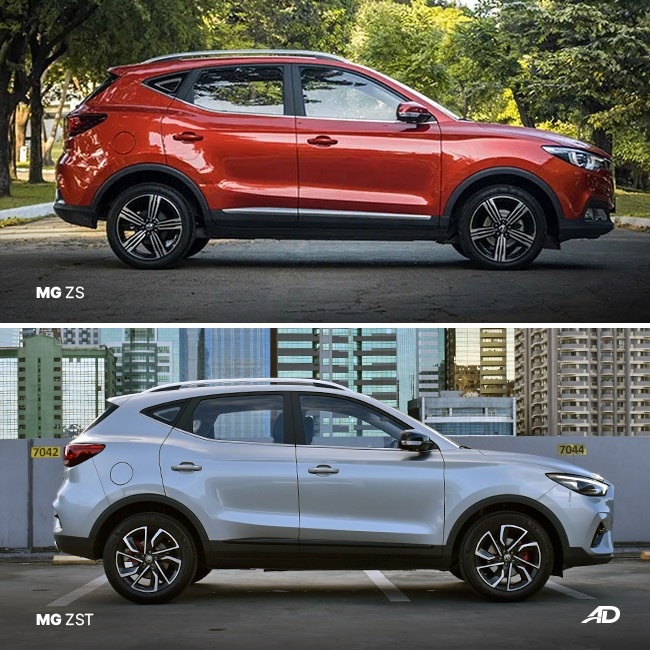 All in all, there are only a few millimeters of difference when it comes to the dimensions. The ZS T is longer and wider, accounting for changes to the body dimensions, but the wheelbase remains the same. At least for us, the ZS looks pretty okay still, but just a little more dated in comparison to the ZS T. It’s an easy choice because the ZS T is a lot more eye-catching than the ZS even in a vacuum. 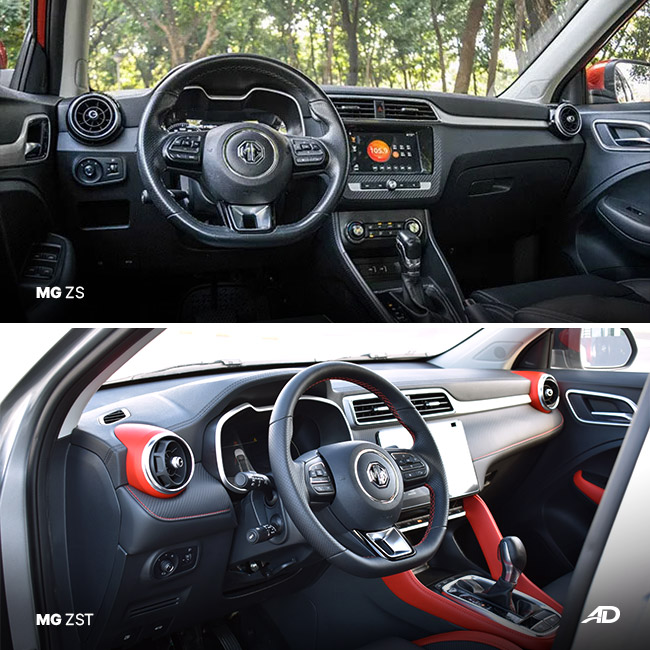 If you haven’t been in the interior of an MG ZS, you’re not missing much, but the ZS T's interior is so much nicer than the ZS' to the point that it seems like a totally different experience. The accent colors and the rounder shape of the dashboard give the ZS T a more modern look and feel that was a sore spot for us back when the ZS was the only kid on the block.

On top of that, the ZS T gets motorized seats over the ZS with a six-way electronic to adjust driver’s seat that happens to be heated as well. On top of that, you also get red stitching all throughout the cabin’s upholstery, and the steering wheel also has a bit of style to it as well. MG may have the same general design for its interior, but the brand added just enough for the ZS T to edge out the ZS, naturally so. 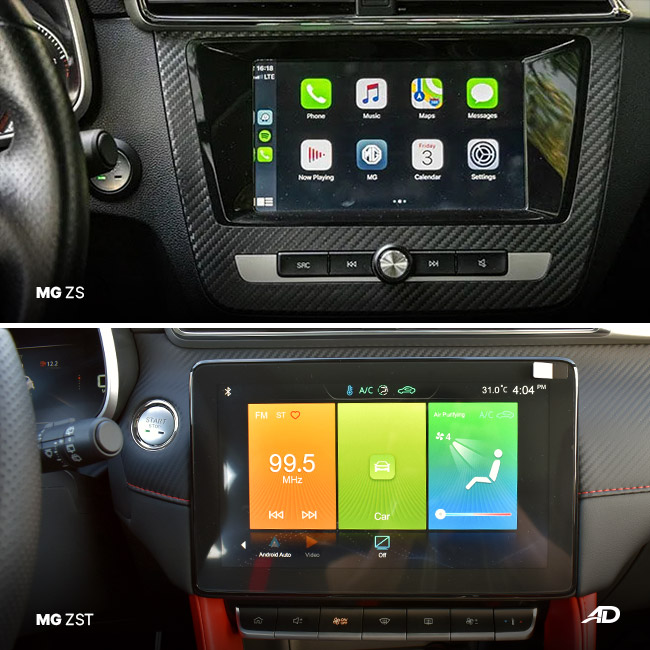 It’s yet another landslide victory for the ZS T, and at this point, it’s pretty much a successor to the ZS if you think about it. The standard ZS only comes with an 8-inch infotainment screen, but the newer ZS T gets a 10-inches of screen real estate that also sports HD resolution. You get the same number of speakers, six in total for both, but you get up to five USB ports in the ZS T over the ZS’ two. The operating system in the old ZS infotainment display is also only Apple CarPlay compatible, while the new ZS T’s infotainment system adds support for Android Auto on top of Apple’s pairing software.

On top of that, the safety features that you can find in the ZS T punch above its price range, at least in terms of the subcompact crossover market. Looking at it, you can see specifications like lane change assist, rear cross-traffic assist, rear driving assist, a reverse camera with a 360-degree display, and even an electronic parking brake with auto-hold.

On top of that, the ZS T also gets passive keyless entry, which is better than the ZS’ standard keyless entry, but with a push-start system. It’s clear to see that MG paid attention to the refinements that the ZS needed coming into its second iteration here in the country, so the ZS T wins. 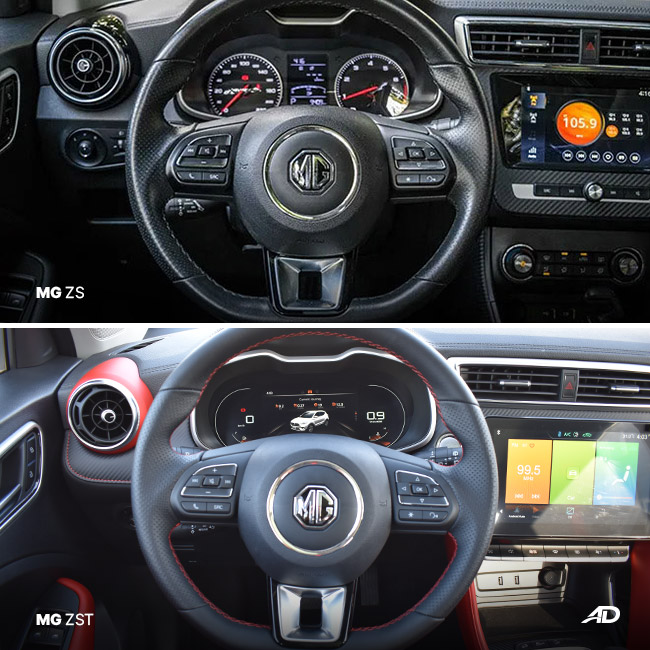 Despite getting a better and longer spec sheet, the ZS T gets a smaller engine, but before you get disappointed, it’s a turbocharged motor. The ZS has a 1.5-liter inline-four that makes 112 hp, and 150 Nm of torque. Not bad for a naturally-aspirated mill. The ZS T, on the other hand, has an inline-three cylinder engine that’s turbocharged and makes 161 hp and 230 Nm of torque. On top of that, the ZS T ditches the old four-speed automatic and goes with a modern six-speed automatic with sport and manual modes.

So that’s the power of power. The ZS T wins once again. 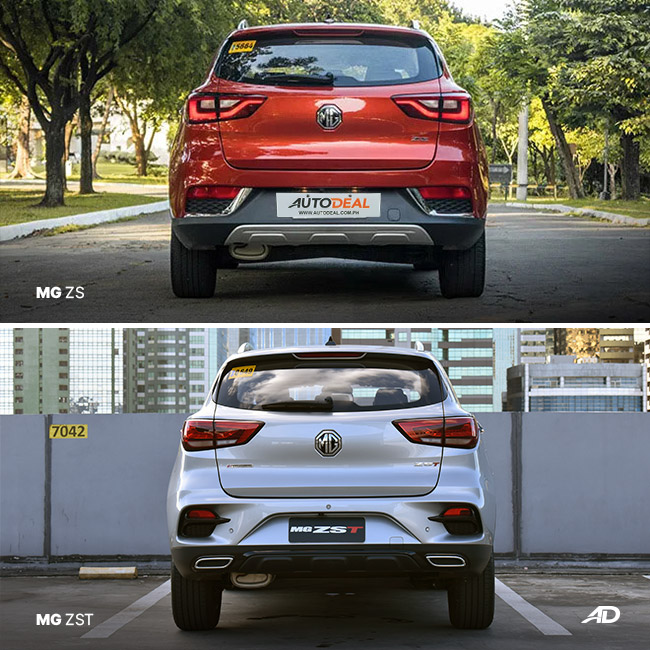 Here’s a plot twist, however. If you are in the market for an MG vehicle, which of the two do you get? Granted the ZS T is better but is it really worth P1,158,888 when you really just need the 1.5-liter equipped ZS? Considering the prices of both models, the difference will make you wonder if getting the more expensive model is worth it.

The MG ZS tops out at P998,888 but can be had for much less. The most affordable model is priced at just P818,888, which makes it plenty affordable for many Filipinos. If you’re considering the top-of-the-line model, the price difference is still a staggering P160,000, and that’s a lot of groceries and other things that you can spend.

Though, the difference between the ZS Alpha and the ZS T seems to be worth it. If you are eyeing the top-of-the-line ZS, then perhaps it would be better to consider the ZS T instead since you’re already there.

However, if you are considering the ZS in its lower trim levels, then perhaps the jump would be too big for your budget. It doesn’t really make sense to jump so far especially if you’re looking at a price difference of P340,000. That’s a lot of money, and as such, this category ends in a tie. 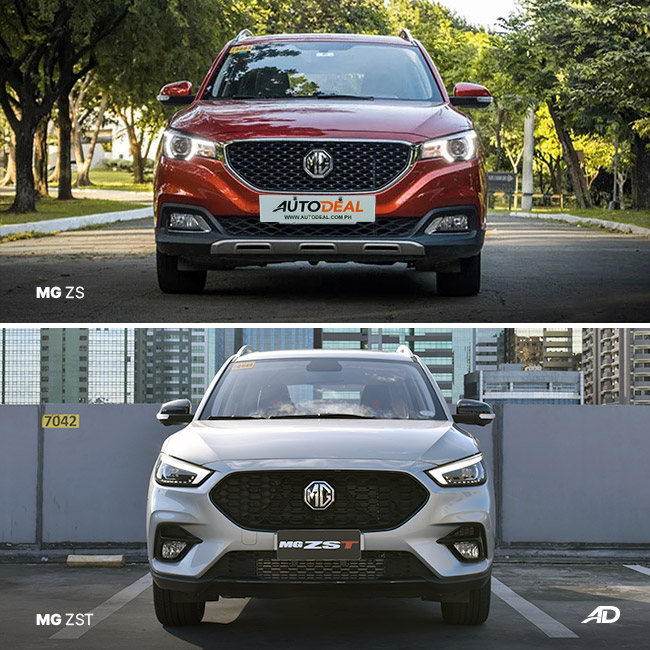 It comes as no surprise that the ZS T is superior in every category. The ZS is a dated, yet still serviceable model. Our advice is to skip the Alpha variant of the ZS, and then head straight to the ZS T. You’ll get more satisfaction provided that your budget can stretch the extra mile.

However, if you are closer to the budget of a ZS in its Style MT or AT trims, then perhaps it’s not so worth getting the ZS T because of the large gap in price. Consider upgrading to a Style Plus ZS if you're considering the base ZS as your vehicle of choice. Though, if you can tolerate the extra price of a ZS Alpha, then perhaps the ZS T is a worthy consideration. In short, the winner truly depends on just how much you're willing to shell out for a subcompact crossover. Winner: ZS T?