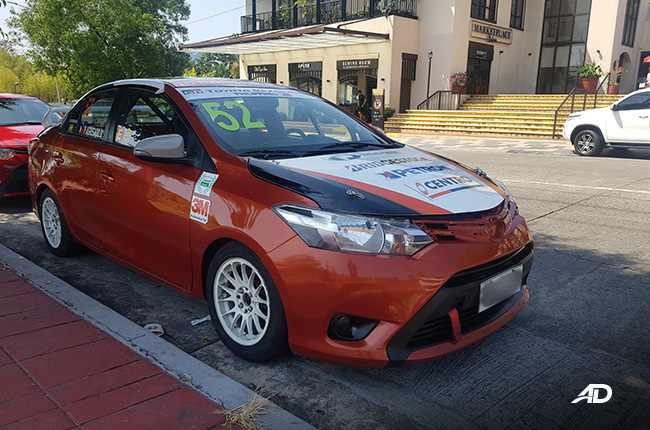 I got to spend a day with a third-generation Vios Cup Car in the Metro. Relating to our previous article back when the Toyota Vios Racing Festival was announced, this is the generation that preceded the rebrand of the racing series here in the Philippines.

So, I asked the owner of this Vios race car about what the process was in turning it into the one make race (OMR) spec machine that it is today. Without a doubt, it is as Toyota’s guide states. Several modifications have been made to get this car up to the specification that performance driving demands. The regulations are strict and any deviation that the marshalls find will lead to disqualification. Starting off with the platform, it is a 1.5L G variant that was converted into a bonafide race car. On the exterior of the car, is a livery that includes several of the sponsors of the event. The projector headlamp that defines the G variant is also swapped out for the lighter Halogen reflector found in the 1.3L J variant. You can also spot the tow straps in the front and rear bolted to the chassis of the car. A rear wing comes equipped at the rear and that’s about it in terms of body modifications that you can see. What you cannot see underneath the paint and decals are the materials used to replace the old steel components with lightweight body panels. A lighter trunk and hood are only two of the replacements that I noticed. 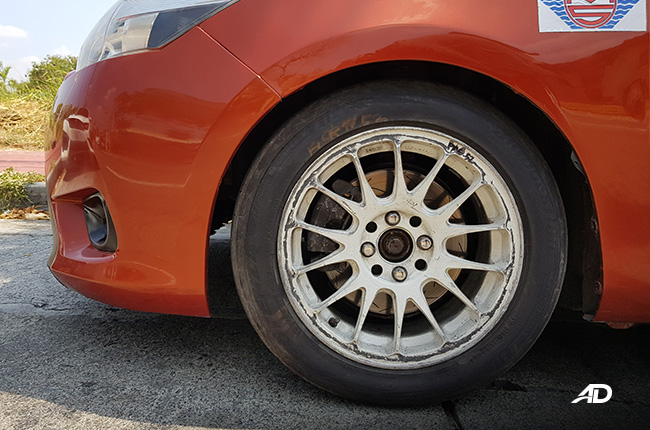 A set of 15-inch Rota Reeves in white. These wheels are wrapped in a set of Bridgestone Potenza RE003 tires that are 195/55 R15 in size. For the brakes, an all-around disk setup is complemented by Brembo brake pads and a set of slotted rotors. The fender liners are also removed to save weight. The standard shock absorber and spring are swapped out for a set of coilovers that give the car a lower center of gravity, as well as stiffer compression and rebound so that the car is responsive in the corners. 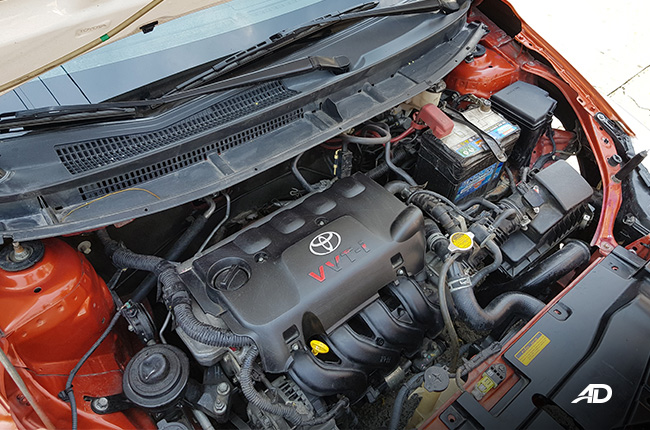 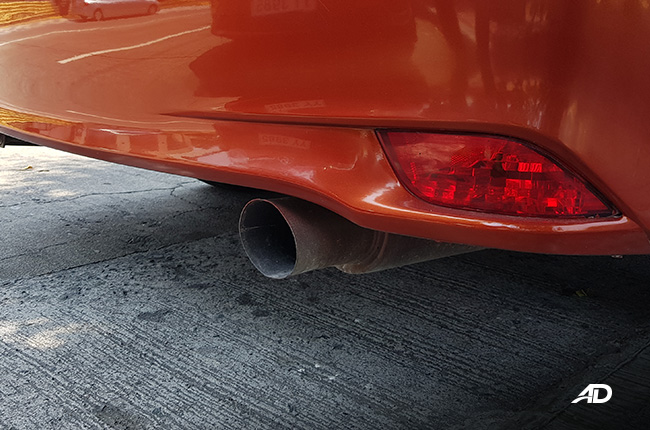 Looking at the engine, it reveals that not much was done to improve the 1.5L, so what you see on track is close to stock performance. Standard modifications for most race cars are intake, header, and exhaust upgrades. These updates often come with a tune in order to get the ECU to run the engine optimally and produce real gains. Sadly though, there isn’t much gain here. The tuning that Toyota put out was more to increase the mid-range power band of the little 1NZ 1.5L engine. The brand that made these exhaust components was TRD, and these parts are developed by Toyota themselves for use in the Vios. 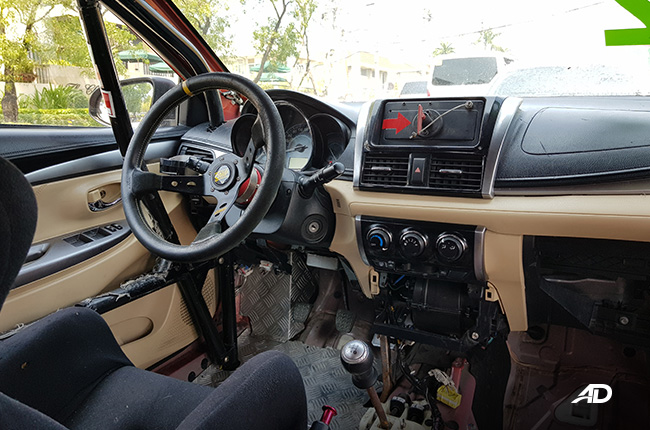 All the items that make the Toyota Vios a decently comfortable vehicle were taken out. These include the center console, interior carpeting, and sound deadening material. Every single gram of weight saved means an edge over the competition. All the stock seats were removed, even the rear bench. Replacing the seats was a solo OMP fixed bucket seat mated to a four-point racing harness that is also from OMP. The steering wheel was also swapped out for an OMP unit and to aid in the ergonomics of it all, the pedals were swapped out for a set that is larger, to aid in downshifting, upshifting, and braking. 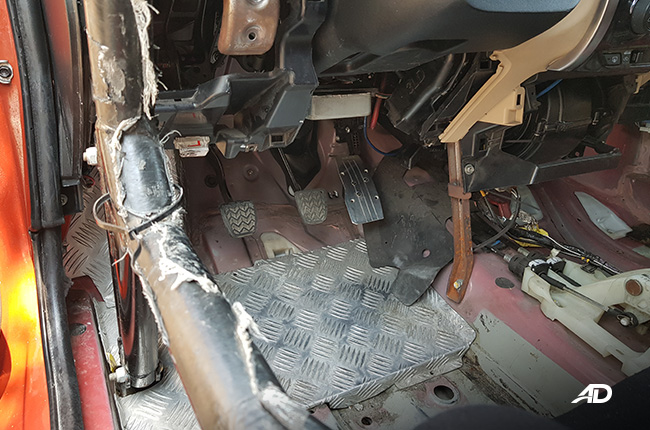 This car also comes with a roll cage, which prevents the cabin area from getting crushed in the event of a high-speed crash or roll. It also improves rigidity which then translates to better handling and works in tandem with the upgraded suspension. There is also a prominent key that takes the place of the infotainment system. This key triggers the fire suppression system that will kill the engine and suppress any flames that may harm the driver in the extreme event of combustion. Taking this Vios around town was going to be an experience in itself. If the metal cage that I had to squeeze through didn’t indicate how much this car means business, maybe the stripped-out interior will, or maybe the stiff shocks, or simply the fact that I had to buckle in a total of four times in order to be properly harnessed to the seat one time. Needless to say, it’s a race car and certain rituals have to be followed.

Here I was, strapped in and ready to leave. Driving the car wasn’t as hard as I had imagined. It’s a Vios, so the clutch was light enough, and the power was predictable. Once I got rolling, however, the stiffness of the suspension was very noticeable, as was the lack of any sound deadening. I could hear everything that was happening around me. Every bump and every horn blared was heard. The exhaust was also quite loud with the drone of the exhaust easily penetrating the cabin.

Needless to say, the car shines quite nicely while changing directions. Even with simple lane changes, the steering was responsive. With a lower center of gravity, slightly more camber, and grippier tires, this Vios was pointing in the right direction before I knew it.

Acceleration was nothing to write home about. It may have been stripped of its interior and given a couple of power upgrades, but the roll cage on its own made up for the lost weight savings. If anything, it is slightly faster than your average Vios and it does corner like it’s nobody’s business. 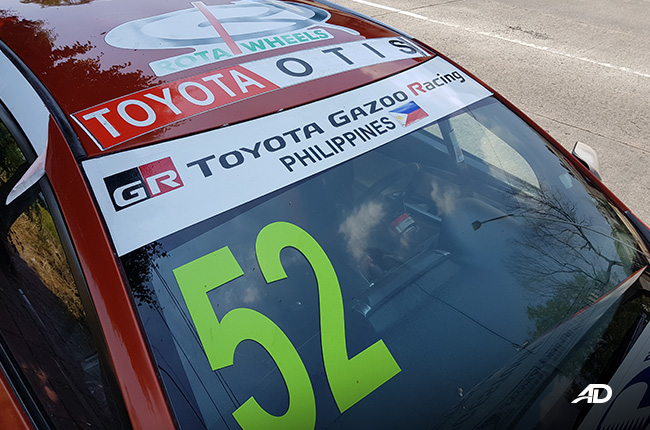 Let’s take note also that the owner had to reinstall the aircon system again. Vios Cup Cars or Vios Racing Festival cars have no such luxuries when they are driven on the track. That and A/C systems tend to suck power away from the engine as well as add some weight in the process. There you have it, a Vios Cup Car for a day. While it is pretty substantial of an upgrade, the little subcompact doesn’t go blisteringly quick on straights. There is not much excitement when all you do is start from a dead stop, floor the throttle, and row through the gears when your car is not made for straight line speed. Instead, the Vios Cup Car shines in the bends of the race track. 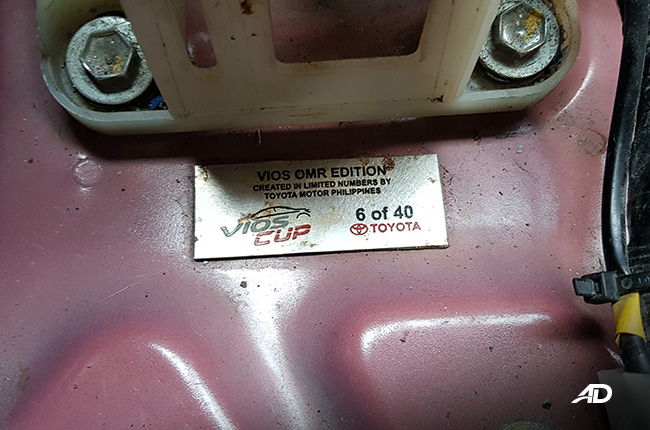 Now, would I daily this? No. Ride comfort is definitely compromised and you can’t fit anyone in the back safely because there are no seats at all except for the driver. Would you take this out to play on CIS, BRC, or the Vios autocross challenge? Absolutely. It was an experience, and I personally thanked the owner for giving me the opportunity to experience what it would be like to have a race car for the day.