If you have ever played a racing game, or watched a racing series, or seen a modified car roll down the street, chances are you’ll see something attached to the automobile’s posterior. Nowadays, people refer to these body panels as spoilers, but not all “spoilers” are actually spoilers.

Let’s get our terms straightened out first before we continue. Anything that is flush to the body is a spoiler, while anything that rises above the body or trunk of the car is a wing. Take the Honda Civic Type R in the cover photo as an example. This marvel of engineering can be seen sporting a wing because it rises above the body and doesn’t stay flush with it. The Type R has both, a small spoiler beneath the wing minimizes drag. Alright? Moving on.

Spoilers and wings need a substantial amount of airflow for effects to be felt. In most cases, these bits of fiberglass, ABS plastic, or carbon fiber, reduce drag and make the car cut through the air easier. This can result in increased speed and fuel economy, but only when the car is moving fast enough. With that in mind, most spoilers are meant more for style and as others like to call it, porma or form in English. Again, while there are benefits, they are few and far between as the results are negligible at best, but we cannot deny that a ducktail is a small touch that adds a bit of flare to most cars. Wings, on the other hand, go on the more serious side of aerodynamics. Now, you cannot just plop on a random aluminum wing you found on Lazada, install it, and hope for downforce. It doesn’t work that way. Aerodynamics is a dark art in itself, with manufacturers investing millions of dollars in design mockups and wind tunnel testing in order to fine tune the air moving around the car. Much time is spent by car companies who want the perfect balance of form and function, as a small adjustment could mean the difference between no downforce at all or too much drag.

The purpose of a wing is to create downforce and promote stability at high speeds. Faster cars will be seen sporting wings of different shapes and sizes. It is also important to note that all of the dimensions of a wing would differ depending on the car. Take again the Civic Type R as an example, the wing is paired with a couple of vortex generators to swirl the air to the main blade. Honda intentionally designed the wing to work in tandem with these vortex generators and is not simply an afterthought.

To understand the use of wings and spoiler further, let’s talk about downforce. Downforce is essentially air pressing on the body of the car. As the vehicle cuts through the air it redirects it upwards in order to increase mechanical grip on the tires and promote stability at higher speeds whether you are cornering or going in a straight line. An airplane follows the same principle, where the fuselage and wings are designed to manipulate the air to create lift. The same rings true for cars, only the air is redirected upwards instead of downwards to create a low pressure area beneath the car making it stick to the pavement because of the high pressure area that comes from the air moving above.

If you didn’t catch it before, we would like to say it again. Simply bolting on just any wing on the back of your car will not necessarily produce downforce, it could even produce drag and hurt your performance and fuel economy. Attaching a spoiler won’t do too much either. In other countries where cars are built to take on higher speeds like in Germany, air helps press the car onto the ground and spoilers help reduce drag. There is not much speed that could be had in the Philippines, considering how small our roads actually are, unless, of course, if you’ll use it for on-track racing. 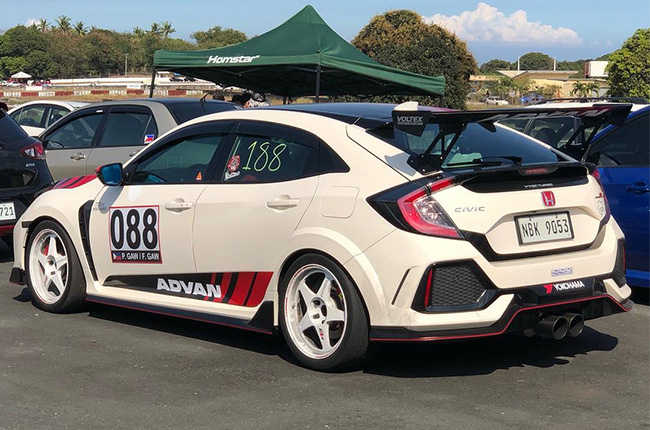 However, if you absolutely want to live out your childhood fantasies of seeing a wing installed onto your car, make sure to point the front of the wing downwards to redirect the air upwards because an improperly angled wing creates lift and becomes a hazard at higher speeds. It’s also important that you mount the wing properly in an optimal location. It would help if you select equipment that is made for your specific model, be it aftermarket or OEM. It helps ensure that the overall design of the vehicle is extended rather than sullied. This helps integrate the look enough to not stick out like a sore thumb.

Remember that the most important aspects of a piece of equipment are the integration and the benefit it brings to the consumer. If an item does not provide any benefit it is essentially superfluous or in other words, useless. Carefully consider every bit of kit that you want to place on your car, or carefully inspect and appreciate the amount of time, effort and money it took to develop and design your vehicle and keep the money that you would have spent on a wing for more important things.

Again, we would like to reiterate that your car does not necessarily need a wing and could be better off without it, but who are we to judge?

Header photo and final photo courtesy of @frnzptrck and @fk8r.ph