Nowadays, fake exhausts are already becoming a thing for most car brands. Some are fine with it while others do not like it. Frankly, we think that manufacturers shouldn’t install this on any car if it was not meant to function, though they have certain reasons for this. In fact, there’s more than just giving the car a sporty look, it may seem weird for many, but its design does serve a few purposes for the vehicle. So why are some car manufacturers choosing faux exhaust pipes over real ones?

Related: Top 8 weird features found on cars in the Philippines This is probably one of the most obvious reasons why manufacturers install faux exhaust pipes on some of their models. It is often sealed-off with black plastic and then surrounded by a ring of plastic chrome giving people the illusion of an exhaust tip.

More importantly, this actually lessens the coordination between engineers and designers, given that they don’t have to consult the engineers regarding the powertrain division of the vehicle before formulating the aesthetic qualities of its exhaust tip. Beneficially, it also allows engineers to do their own thing, in most cases, the true exhaust tip is turned down to face the road and thus expels gases below the bumper, rather than through it.

It also has something to do with a vehicle’s production cost. When it comes to production line efficiency, the smallest things can actually result in big costs. That said, if a worker spends less time aligning an exhaust pipe to a bumper cutout, then the production process should be more cost-effective. Remember, eliminating a chrome tip makes it simpler and cheaper to fabricate an exhaust.

This also concerns the safety aspect of the vehicle. Your car’s exhaust pipes tend to heat up especially if the engine is working harder than usual. Now, this could be a slight concern for those who have the exhaust integrated on the rear bumpers, as the heat released could possibly melt the bumper especially if it’s surrounded by plastic cladding.

Moreover, the high heat could also expand the metal of the tips quite significantly. Therefore, the position of an exhaust tip when a car is being driven with a hot engine versus when it’s parked and cold could noticeably differ.

Real chrome exhaust tips can become dirty over time especially if your vehicle is powered by a diesel engine. This can be concerning for some OC car owners, as the build-up of exhaust soot could make the tips and rear bumper of your vehicle look dirty and haggard. This is why some car manufacturers designed the original exhaust of a car pointing down on the road instead of straight back. By doing this, they will then integrate fake exhaust tips on the bumpers and hide the real one underneath the bumper. 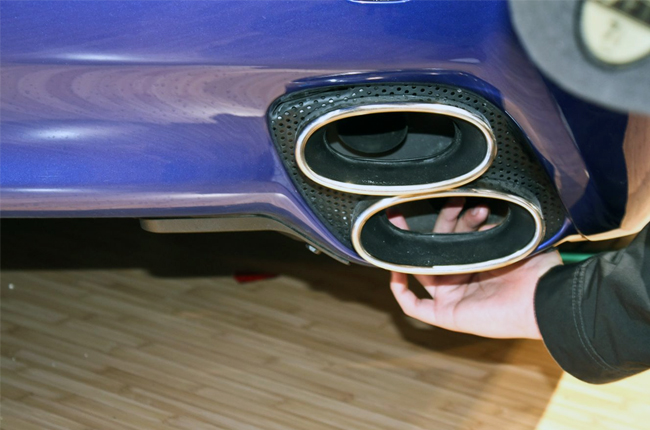 Aside from newer models that have this feature as standard, other car owners choose to have their vehicles installed with faux exhaust pipes just to give it a bit of sportiness. For them, it seems less complicated to have it accessorized with fake exhaust tips instead of real ones. It eliminates the complication of going through the powertrain division of the vehicle, plus, it should also save them money.

As we always say, looks are subjective, and with the case of fake exhaust tips, you either like it or hate it. That said, just do whatever you want with your, personalize, and customize it according to your taste.