The Toyota Vios has come a long way since its introduction in the Philippine market in 2003. Even with 16 years under its belt, the Japanese subcompact sedan stayed humbly competitive and even if you ever are not a fan per se, we bet you can’t still deny its influence in the local car market. Wherever you tilt your head, there’s a first-, second-, and third-generation Vios on the streets.

We know there are plenty of nameplates in the subcompact sedan but if we pull out some facts, we can clearly see there’s a big gap in competition. Aside from receiving the 17th consecutive Triple Crown after selling 25,840 units in 2018, the Vios was also throned as the best-selling car in the Philippines in 2018. Now, if you happen to be curious about the Vios and are wondering which among its variants fits you, you’ve clicked on the right article. What’s good about the 2019 Toyota Vios is that it is offered with two engine options: the 1.3-liter and 1.5-liter gasoline engine. With its wide variant range, the Vios can cater to varying demands and needs of buyers, be it budget concern or practicality. However, despite having two engine options, the Vios gets an equal amount of safety features, as well as a few other goodies.

Believe it or not, all variants of the Toyota Vios come standard with a complete set of airbags, which are the dual front, side, curtains, and driver knee airbags. It’s got vehicle stability control, hill-start assist, anti-lock braking system, child lock protection system, and high-mount stop lamp. All variants also come with power steering, window, and door locks as modern basic-tier convenience feats. Other than those, everything else is pretty much depending on what engine you’re eyeing for.

Things you get from 1.3 variants The Vios’ 1.3-liter variants outnumber the 1.5-liter ones; two is to one. These are the Base, J, E, E Prime, and XE. The Base MT, as the name suggests, is the cheapest Vios you could get in the market though, of course, there were a number of elements sacrificed. At a price of P659,000, the car is stripped down of daylight running lights (DRL), front fog lamps, power side mirrors, the Toyota Vehicle Security System (TVSS), and wireless door locks.

Climb a level up and you’ll have the 1.3 J MT, which, with its P685,000 price tag, is slightly better than the Base. To be more specific, the trim’s 14-inch steel wheels come with a full cap, as well as an Optitron meter gauge versus the Base’s analog instrument cluster. Succeeding the J MT (according to price) is the XE trim, which is relatively younger compared to the aforementioned variants. It’s priced at P735,000 for features such as stability control, hill-start assist, a seven-inch touchscreen with WebLink for both iOS and Android, as well as a sound system consisted of six speakers. On top of these, the XE is the base Vios variant that uses continuously variable transmission (CVT). The E and E Prime, on the other hand, are much better variants because they have fog lamps. A minor difference but is very helpful on most occasions, especially during night drives on poorly-lit areas. These variants are available with a 5-speed manual and a CVT. The notable advantage of the E and E Prime is the seven-inch display audio with WebLink for Android and iOS smartphones. Lastly, these variants feature four speakers, steering audio switch, and a fin-type antenna.

Despite all differences across the engine range, all variants share the same power output generated from the 1.3-liter Dual VVT-i gasoline engine. The Vios 1.3 variant range’s maximum power and torque outputs are 98 hp and 123 Nm.

Thinking of going for the 1.5? If 98 hp and 123 Nm of torque are too low for you, then you might like to check out the 1.5-liter variants – the G and G Prime. Not only that these trims offer larger engines, they also have the best techies across the range. The 1,496-cc engine can spur out 106 hp and 140 Nm of torque and it’s just the tip of all the goodies. The 1.5 variants feature 16-inch alloy wheels, halogen projector headlamps, daytime running lights, LED rear combination lights, leather steering wheel with audio control, and automatic climate control. Safety is also better, as both have engine immobilizer and smart entry with speed-sensing door locks.

The G variant is offered with options for a 5-speed manual and CVT, though the CVT has a few advantages such as paddle shifters, Eco-Drive mode, and Sport Drive mode. Meanwhile, the G Prime gets exclusive body kits, along with the same plethora of high-end features on the 1.5 G variant. The G and G Prime trims have a price tag of P1,055,000 and P1,095,000, respectively. 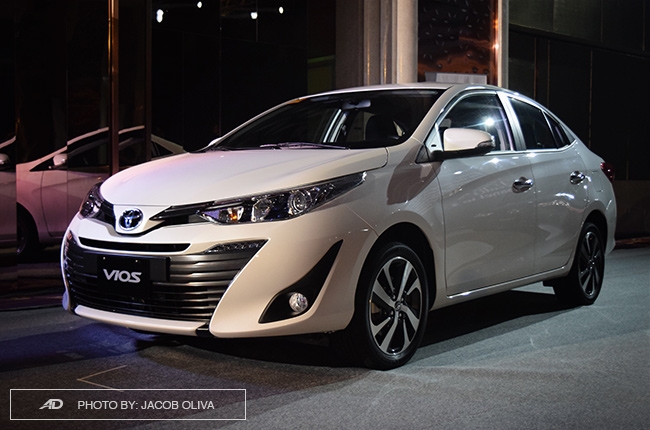 Whether you’re going for the 1.3 or the 1.5 variant, you want to always assess whether what you’re paying for is worth it. For the 1.3 Vios variants, we’d say that the XE is the most practical model. It is cheaper than the E and E Prime, which the XE shares its features except that it comes with more speakers inside the cabin. Compared to the Base and J trims’ 2DIN entertainment system, the XE has seven-inch display audio with WebLink for Android and iOS. That’s for a price difference of P50,000 from the J MT.

Meanwhile, if we are to pick one on the 1.5 range, we’d say that it’s best to opt for the G CVT as it’s the most practical. That’s unless if you’re after the aesthetics of the Prime-exclusive body kit of the G Prime, or prefer manual, then you could go for whichever trim that pleases you. After all, car buying behavior is heavily influenced by personal preference.