It’s a redundant mouthful to say, but the Mitsubishi Philippines has expanded the Xpander’s lineup since its launch in the country a while back. When it came to the small MPV segment, the Japanese marque’s offering was one of the more compelling choices in its class. A good loadout of features, fuel economy, loads of space, and comfort were some of the key contributing factors to this model’s success.

So, an expansion pack was added, but one variant was axed to give way to it, which we think is an acceptable move given that the new variant is the Xpander Cross. So which one of the Xpander models should you buy? Is it worth going for the Cross? Let’s dive in. In the GLX family of variants, the Xpander gets two transmission options. The most entry-level variant gets a 5-speed manual gearbox while the next variant up gets Mitsubishi’s traditional 4-speed automatic. Starting out at P1,008,000, for the most basic variant, the Xpander still seats 7, still features a unibody chassis and the frugal 1.5-liter 4A91 naturally aspirated engine that produces 103 hp and 141 Nm of torque, which should be enough to ply the streets of Manila. The GLX AT variant, however, is a nice step up in terms of price and features For P80,000 more over the base model, which brings the price to P1,088,000, the most affordable automatic variant gets a few marked improvements. First off the transmission that is mated to the 1.5-liter engine is now a 4-speed automatic. Instead of the 2-DIN non-touchscreen head unit, this variant gets a 6.9-inch touchscreen with AUX, USB, Bluetooth, and Mirrorlink connectivity options. The automatic variant also upgrades its wheels to a 16-inch two-tone alloy set, which is a marked change over the 15-inch wheels that the GLX MT came with.

As for safety and other features, it is important to note that all models in the lineup feature driver and passenger airbags, as well as 7 three-point seatbelts front to back. ABS with EBD is also included across the range, as are ISOFIX tethers, and an emergency stop signal for sudden decelerations. All models also come with cruise control and steering wheel audio controls. This variant family used to be the top of the line offering from Mitsubishi. The GLS Sport variant used to be the best Xpander that the brand had to offer, but this model is just the same, minus the body kits that the Sport came with prior.

The interior is also improved in the GLS AT variant with small touches like the leather-wrapped steering wheel and subtle changes to the interior. At a premium of P40,000 over the GLX AT, however, it seems like there – totaling to P1,128,000, the GLS AT Also has a push-start system that allows for passive entry. With a price of P1,255,000, the Xpander Cross is a big departure from the GLS variant, and with good reason. The P127,000 price difference is big, but the changes between the GLS model and the Cross variant are substantial. Starting off with the size, the overall length of the vehicle grew by 25 mm, the width by 50 mm and the height by 50 mm. The wheelbase remains the same, but you get an extra 20 mm of ground clearance over the GLX AT and the GLS AT variants.

For the exterior, you get bigger 17-inch wheels with a different spoke design in a two-tone finish. The body gets matte black cladding all over, while the front and rear get a subtle tweak that adds a touch of ruggedness to the futuristic Xpander fascia. You also get roof rails that add to its character. The interior, instead of the cloth upholstery, will come leather-clad in brown creating a two-tone look to the interior of the Xpander Cross. Black panels and are accented by a brown stitch which adds some contrast that’s more classy-looking. Another marked improvement can be found in the dashboard, namely the 7-inch touchscreen that is mated to 6 speakers. On top of that, you also get extra safety features like stability control, traction control, and hill start assist, which will help keep the car controlled when things go awry.

While all these models may be objects of desire, it is important to size up your needs accordingly, and buy what you can afford. The Xpander family has a new addition to the lineup, which goes for a big sum. Though, we cannot deny that the original model is still a viable buy considering that it still hovers around the P1,000,000 mark. With that being said, our most value-oriented buy, if you’re not that picky about features, is the Xpander GLX AT. We feel that this model, priced at just P1,088,000 will give the best bang for your buck. If you want an automatic model with most of the bells and whistles that Mitsubishi can offer, then this is the car for you. The GLS is good too if you want the added benefit of a push-start system. 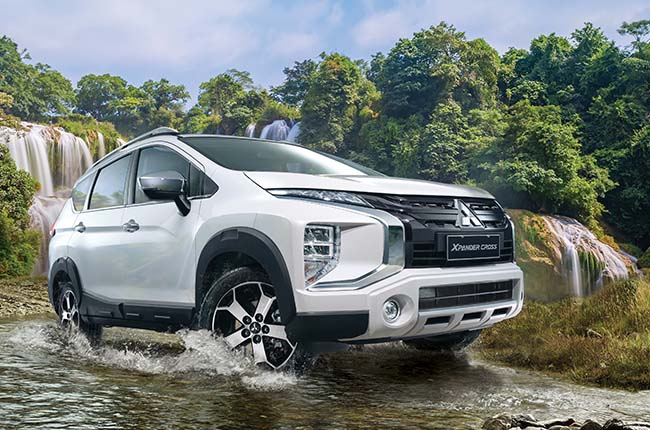 Now, are we crowing the Xpander Cross as the winner? Perhaps it is considering all its features. We cannot deny that Mitsubishi has spruced up their small MPV to the point where it may even justify the price tag. We have to note that the Xpander Cross is no budget 7-seater. It sits in that middle ground between an entry-level base SUV and a more affordable MPV. It’s a premium option for those looking to shop in the segment. Because it is the best Xpander that money can buy at the moment, and its changes are substantial in contrast to the rest of the model lineup, we’ll give it our win on this Variant Comparison Guide.