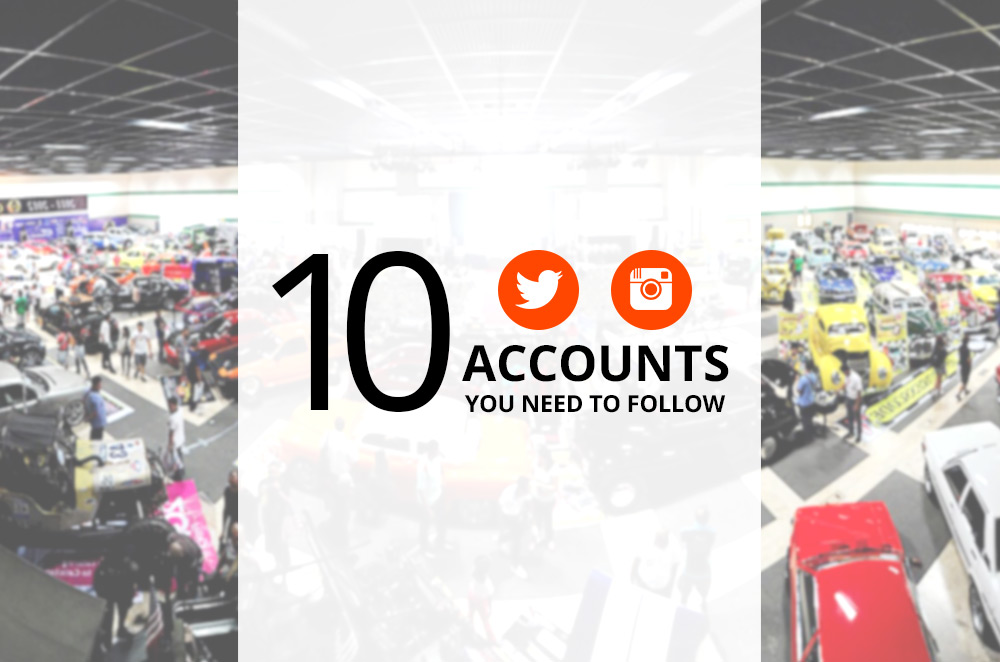 Netizens in the Philippines are pretty much spoilt for choice when it comes to motoring. As the media world continues to transition to digital, there’s absolutely no shortage of professional and personal blogs that closely cover the scene. However with so much content kicking around it’s sometimes a little difficult to see the wood from the trees; especially on fast-paced social networks like Twitter or Instagram.

In order to help everyday motoring fans (or newcomers to either social media platform) we’ve compiled a shortlist of 10 Philippine motoring Twitter and Instagram accounts that’ll most definitely entertain, inform, and inspire you in 140 characters or less.

In no particular order, let’s begin.

You must have been living under a rock for the last few years if you don’t already know who Marlon Stockinger is. Not only is he a Formula Renault series competitor, but he’s also a Lotus F1 Team Junior driver, meaning he’s not only the fastest Filipino on four wheels, but he’s also our best chance in having the Philippines represented at the highest level of motorsport. For the last two years he’s also been the star of the Lotus F1 roadshow, which has seen Marlon tearing up asphalt in and around Bonifacio Global City and the Mall of Asia complex in his Lotus F1 car. Marlon’s twitter account keeps fans up-to-date with his on-track performance as well as providing insights into the day in the life of a race driver. Aside from motoring fanatics, Marlon rightfully has also grown a huge following of passionate female followers.

Another Filipino who is well and truly representing is Mazda Road to Indy star Michele Bumgarner. Much like Marlon, Michele has made several visits to the Philippines in partnership with her sponsors at Mazda Philippines. Last year she gave fans the opportunity to go head-to-head with her in a brand new Mazda 3 in an event organised with Top Gear Philippines. Michele shares insights into her progress in the Mazda Road to Indy series as well as several glances into her personal life.

If you’re interested in drooling over images of Ferrari’s, Maserati’s, Jaguar’s, Land Rovers, and (very soon) Aston Martin’s, then you really need to check out Marc Soong’s colorful Twitter profile, which is conveniently paired with his very active Instagram account. Aside from luxury vehicles, Marc also provides plenty of entertainment by providing feedback on pretty much every current affair as well as the occasional piece of advice and blurts from his inner-monologue. Handling some of the hottest brands in the Philippines, Marc’s accounts are guaranteed to deliver your daily dose of #carporn.

Admittedly James Deakin doesn’t really know how to use twitter. Nevertheless, he has been able to give birth to his very own hashtag #deakinitis - a term which relates to his complete competency in contributing to his own misfortune. Nevertheless James’s account, which is hooked up to his Facebook Page provides timely updates on Philippine first test drives as well as information on really important motoring topics and advocacies. In the last year James has pursued such causes as a petition to demand the mandatory installation of speed limiters on public buses as well as spearheading a massive fundraising campaign for an infant requiring open heart surgery. Right now James is also embarking on a sponsored weight-loss journey, he is asking his followers and iconic members of the motoring industry to donate cash for every pound lost. The proceeds of which will go to charity.

One lady who needs little introduction is Philippine Star and C! Magazine columnist Angel Rivero. Best known as one third of the Brewrats, Angel’s twitter account gives us insights into her jet-setting lifestyle with C! Magazine as well as providing ample insights into her quick wit and various culinary encounters. With great commentary and witty comments, Angel is guaranteed to keep a smile on your face. Tama!

Broadcaster, talk-radio host, and Editor-in-Chief of AutoCar Philippines Ira Paganiban has been getting pretty involved with mobile photography as of late. His Twitter account which is linked to his Instagram account (iradapogi) posts a number of automotive teasers, no BS commentary and a persistent volume of photos of grilled meat. Food and cars, i’m beginning to see a trend develop here…

As one of the county’s top digital media publications, AutoIndustriya tweets a variety of content that is appropriate for gear heads and regular day motorists alike. Some of the most common sightings on their account are images of concept cars, worldwide and domestic motoring news, and reviews on the latest vehicles to hit the Philippines. You can also find interesting features, such as editor-in-chief Vince Pornelos's (@vinceporn) Mitsubishi Lancer restoration project. Definitely a buffet of motoring nutrition if ever we’ve seen one.

JP Tuason is the co-founder of the infamous Tuason Racing School; an institute that continuously supports the growth of local motorsports in the Philippines. In recent months he and his team have got together with the likes of Toyota Motor Philippines to bring life to the Vios Cup which closed its opening season with a dramatic street circuit race in BGC. JP is a multi-awarded racing driver and is the first Filipino BMW M Certified driver trainer. You can also follow Tuason Racing School on Instagram.

One traditional broadsheet that’s making bold steps into digital is the Drive segment of the Manila Bulletin. Their account, which is paired with a very active Instagram account (mbdrive) provides insights into every single motoring event both at home in the Philippines and overseas.

Finally, the list would not be complete without including the local chapter of the massively successful TopGear franchise. With a gathering of around 13,000 followers, TGP’s Twitter includes (among many other things) a fast-paced crossfire of conversations on various motoring topics, not to mention a wide variety of news and reviews.