When we first saw the sixth-generation Z4 on rendered photos in July, we knew exactly that our pupils were being blessed. The moment we laid our eyes on it, a series of flashback montages hit us in full swing – the BMW Z4, the German roadster most of us grew up admiring even since its early days, is back and it’s too darn good that we can’t take our eyes off of it. BMW’s Z series has been around since 1989 and has been true to being a roadster ever since. The first-generation model, the Z1, only came out with 8,000 units, while the second-generation badged as Z3 showed up in the GoldenEye James Bond movie. Talk about fame, the Z4’s got that Hollywood status, too – just like the Aston Martin DB5.

Go back to now, 2018, the day has finally come. Almost ten years after its fifth-generation version, the German marque has introduced its sixth-generation model. This time, the roadster borrowed the platform of the new Toyota Supra that was revealed earlier this year.

“The BMW Concept Z4 Roadster is a promise of a production version planned for the future.”
Adrian van Hooydonk
BMW Group design chief

The 2019 BMW Z4 debuted at the Pebble Beach Concours d’Elegance. It will be among those vehicles that will be evaluated to receive the Best in Show trophy. There better be tight contenders as this entry from the German automaker is straight sleek in all directions. Just look at its exterior. The new athletic contours that runs along the front, side, and rear are just introductions to the entire package.

Sporty as it is with it's athletic character lines, the 2019 Z4 features vertically-stacked headlights, a pronounced kidney grille with mesh pattern, long clamshell hood, and large air vents. These draw in the impression of aggressiveness without parting away from BMW’s signature vehicle design. Add to these the Frozen Orange Metallic paint finish that gives the roadster more life – as it already has so much of it no matter what color you paint it with. Complementing this color is the electrically operated soft top painted in anthracite with silver effect. 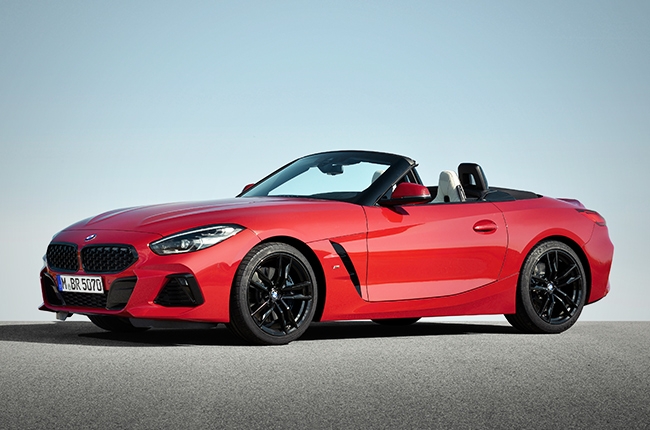 Meanwhile, the cabin is where half of the things we like about the Z4 lies. The all-new Z4 boasts a driver-oriented cockpit styling that focuses solely to sport driving enjoyment. The dashboard houses in a well-organized orientation of control elements, as well as a nicely-put BMW Live Cockpit Professiotnal floating multimedia screen. Also, first featured on the BMW roadster is the inclusion of the Head-Up display. Under the hood, you’ll see BMW’s upgraded 3.0-liter six-cylinder engine with 382 hp and 500 Nm of torque. This launches the car from zero to 97 km/h in roughly under 4.4 seconds. The M Performance Model, on the other hand, gets M-tuned suspension with electronically controlled dampers, M Sport braking system, and M Sport rear differential for that M Performance level. These are just preliminary information. BMW promises to announce full details and specifications of the 2019 Z4 roadster on September 18, 2018. However, they did make clear that the 2019 Z4 30i will arrive in the US BMW Centers around March to May of 2019, while the 2019 Z4 M40i would come in the second quarter of the same year.