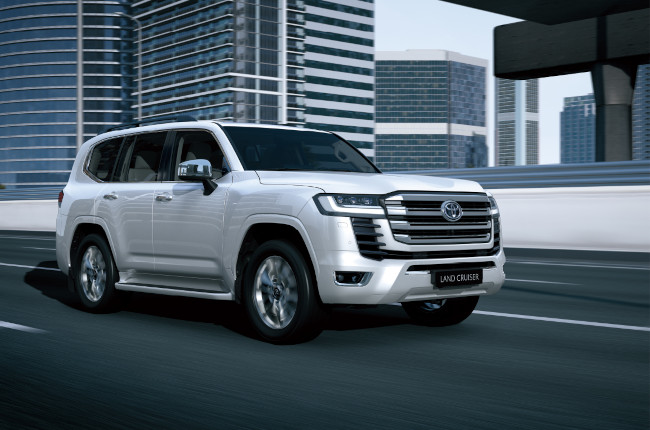 Since 1951, the Land Cruiser has been a mainstay in the Toyota lineup. Whether it’s used for VIPs, off-road adventures, or as a do-it-all family vehicle, it’s an enduring name that finally gets another generation after more than a decade on the market. The Toyota Landcruiser 300 officially makes its debut and is unveiled for all the world to see. The new full-size SUV is based on Toyota’s GA-F platform, which features a frame that offers reduced weight and increased rigidity. The vehicle weight is reduced by 200 kg from the old model, and it features a lower center of gravity, enhanced weight distribution, and improved suspension structure. Exterior-wise the LC gets an updated front fascia with a large grille and a similar look to the outgoing 200 series. If customers opt for the standard model, they can expect large slats on the grille and undernea=th the headlight. The lights themselves are all LED with DRLS, and fog lamps underneath. There is a GR-S variant of the Land Cruiser as well, and that features a more open mesh grille and several other blacked-out elements. The rear meanwhile, looks like a more refined version of the 200 series. A slimmer pair of taillights flank a symmetrical badge layout, with the Land Cruiser nameplate smack dab in the middle beneath the Toyota badge. 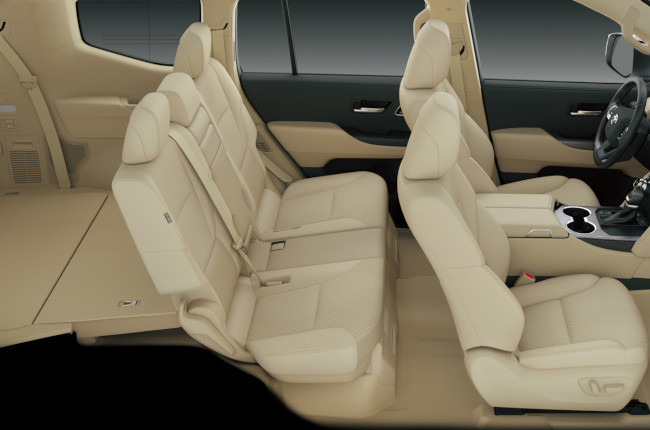 Enhancements made to the Land Cruiser 300 series platform aside, Toyota has also bundled in other driver aids like the Multi-Terrain Monitor, which displays obstacles as seen from the driver’s viewpoint. Multi-Terrain Select is also included. The feature automatically determines the best driving mode for the road surface without the need to sift through driving modes. Toyota has also added the Toyota Safety Sense package with additional features which include a pre-collision system with pedestrian detection. This feature works both in the daytime and in the nighttime for pedestrians, but the brand specifically mentioned that it can detect cyclists in the daytime. The system will also detect oncoming vehicles at intersections and oncoming pedestrians crossing the street while the vehicle is turning either left or right. On top of this, the next feature is emergency steering and crash avoidance functionality. The system will assist the driver with steering when the lane-keeping system is triggered. The new Land Cruiser also comes with a new Parking Support Brake, which can prevent accidents by recognizing obstacles in the front and in the back. This feature also applies to pedestrians.

The interior is also functional and beautiful. Toyota has modernized the layout, making the dashboard slimmer and less intrusive compared to the old model. Instead of an infotainment system inlaid into the center console, the new model gets a floating display. The steering wheel is also brand new for the SUV, and you also get an updated instrument cluster with a larger TFT display. On top of that, you also get space for up to 7 passengers, and unlike the outgoing generation, you can fold the seats flat into the floor for a completely flat loading bay and maximized cargo volume side-to-side. 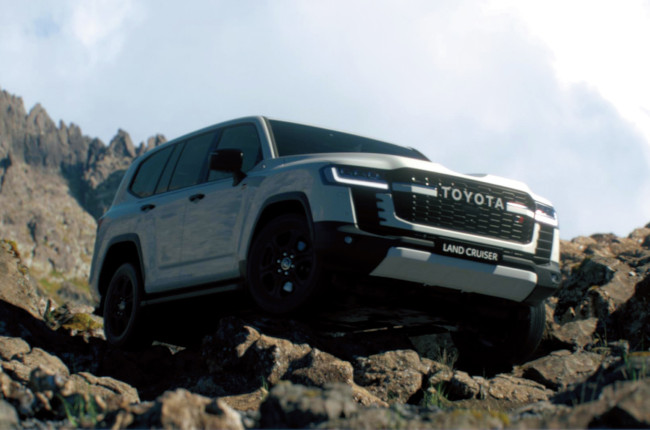 Apart from that, Toyota is proud to announce that it has new engine options for the Land Cruiser. We no longer will see the conventional V8 engines, and instead, get turbocharged V6 motors. We’re still seeing gasoline and diesel being used, however. The diesel motor is a 3.3-liter twin-turbo that produces 305 hp and 700 Nm of torque while the gasoline is also twin-turbo and makes 409 hp and 650 Nm of torque. Similar figures for both engine configurations but as expected, the gas motor gets more horsepower, and the diesel gets more torque. Both engines will come mated to a 10-speed automatic transmission as well as a 4x4 system for its drivetrain.

No news yet from Toyota Motor Philippines (TMP) as to when the new Land Cruiser will drop. That being said, the 200 series seems to be still available at the time of the 300’s launch.

The launch event is middle-east-centric, which will likely signal that the first 300 series of Land Cruisers will be available in that region first followed by the rest of the world.