Auto shows are one of the things that could put a smile to every car enthusiast. It is sort of like the NBA all-star game for basketball junkies, World Cup for football fans, or the Miss Universe pageant. Aside from having multiple car brands in one place, showgoers also have the chance to see new car launches, concepts, and the latest model lineup.

As such, the 2017 Singapore Motorshow featured a bunch of cars. Among the many, we listed down 8 vehicles that caught our attention. 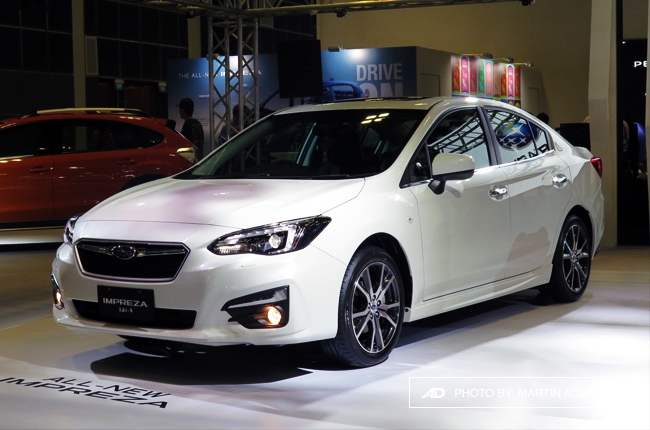 The 2017 Subaru Impreza made its ASEAN debut at this year’s Singapore Motorshow. It is set to rival the likes of the Honda Civic, Mazda 3, and the Toyota Corolla Altis. It is the first Subaru to be underpinned by its new Global Platform, which enhances the vehicle’s overall driving performance. In Singapore, the Impreza was shown in 2 different body styles: a 4 door sedan and a 5 door hatchback.

Locally, the 2017 Subaru Impreza 2.0i-S (4 door sedan) is now available for reservation at Subaru showrooms across the Philippines. It is priced at P1,380,000. The Mazda CX-9 made its way to the Singapore Motorshow, marking its first appearance in the ASEAN region. The all-new CX-9 was first previewed at the 2015 Los Angeles Motor Show. The front end of the vehicle shares similarities with its ‘cousins’ in the Mazda family – the Mazda 6 and the Mazda 3. Also joining the show was the Nissan Note. It is fitted with the brand’s signature V-motion grille as well as sweptback headlights, a large bumper, and fog lamps. Under the hood, the Note is powered by a 1.2L engine that is capable of producing 98 PS and 142 Nm of torque. If sold locally, the Note could pose a great challenge to the Mitsubishi Mirage hatchback. With its sporty-looking exterior and MPV-like body, the Honda Jade RS could get the attention of individuals who love the Mobilio. Overall, the Jade RS looks like a grown-up Honda Jazz. The Jade RS comes with a turbocharged 1.5L engine that delivers 141 hp and 173 Nm of torque; mated to a continuously variable transmission (CVT). However, the Jade RS can only accommodate up to 6 occupants, while the Mobilio is a 7-seater car. The Toyota CH-R is a crossover with coupe-like proportions. The way we see it, the CH-R can somehow be summarized as vehicle that’s a little high on steroids. But don’t get us wrong, the CH-R’s muscular and aggressive exterior is definitely a head turner. Sharing the limelight with other cars at the show is the Audi R8 Spyder. Its wide grille, large bumper, and sharp-looking headlights make it worthy to be Audi’s main attraction during the 2017 Singapore Motorshow. New Sport Experience – that’s what the NSX stands for. This machine is powered by a 3.5L twin-turbo V6 engine and 3 electric motors, capable of producing a combined power output rating of up to 600 hp. If sold locally, the NSX and the Nissan GT-R could have an exciting slugfest. The Mazda MX-5 RF features an aerodynamic fastback design. In case you're wondering, the difference of the RF model to the regular MX-5 is the power hardtop. Mazda says the MX-5 RF’s top/roof can be opened or closed at speeds of up to 10 km/h.