It was in 2017 when the Philippine market had its first glance of the Aston Martin DB11 sports coupe. A love at first sight to some, as opening the hood reveal a huge V12 engine that directly translates to the word 'power'. However, it isn't always about big engines in the country; practicality is a thing and Aston Martin recognizes that.

Now, the British brand launches a smaller engine under the hood of the same existing DB11 – a V8 variant of the sports coupe.

“With the offering of the V8 engine on the DB11, I am confident that we will broaden the appeal and draw more customers to our brand. We are looking forward to seeing more of our favorite GT on the streets of The Philippines. Our customers will enjoy the invigorating drive experience this sporty model can offer in our vibrant country.”
Marc Tagle
Aston Martin Manila chairman and president

So, how far are the two engines in terms of power? A sacrificial amount of almost 100 hp and 75 Nm of torque pulls the DB11 V8 away from its V12 counterpart. Of note, it generates 503 hp and 675 Nm of torque, which is quite a gap if you are all about performance. If you are to floor it in a straight run, the DB11 V8 would go from zero to a hundred kilometers per hour in four seconds, while the V12 could go in 3.9 seconds. Moreover, the car has a peak speed of 301 km/h, which is 22 km/h less than the variant with the larger engine.

The V8 is mounted as low as possible to achieve optimized center of gravity. This was made possible by the new engine mount design alongside the slimline wet sump system. Considering that the engine is smaller compared to the pre-existing one, the car now enjoys 115-kg less weight. 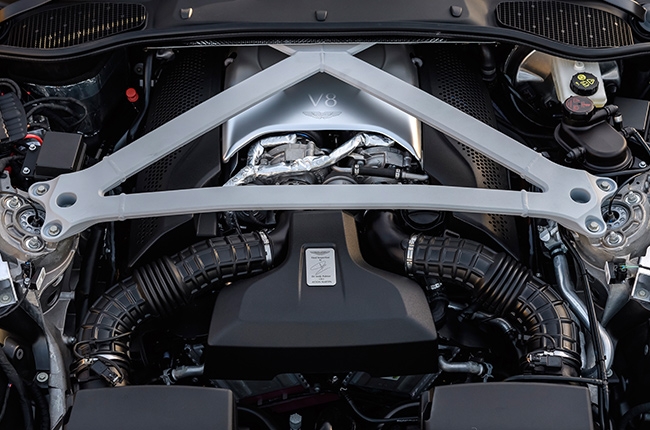 Also, based on the British marque's evaluation, the DB11 V8 has better sense of agility. This is due to the fact that the mass is centered within the wheelbase, as there were certain tweaks in the suspension bushing, geometry, anti-roll bars, springs, dampers, and ESP software.

Aside from having a smaller engine, the V8-powered DB11 offers a sight of subtle exterior changes compared to the V12 variant. In this new variant, you'll find a uniquely designed alloy wheels and dark headlamp bezels. The quartet hood vents on the V12-powered variant are now reduced to two, which are available with a choice of black or titanium-finish mesh. Now, you might be thinking that getting a DB11 with a downsized engine will cost you less of the V12's features. If this is the case, you're mistaken. Both variants are equipped with the same technology and standard equipment level. At the end of the day, you are spending money on a less expensive and lighter DB11.

The V8-powered Aston Martin DB11 is now available to all prospective buyers. First deliveries are expected to hit the market starting this month.