Japanese car brand Daihatsu is selling a midsize sedan called the Altis, and a closer inspection would reveal it’s just a rebadged Toyota Camry. The Daihatsu Altis recently had a refresh, featuring more safety features than the outgoing model.

Related: ASEAN NCAP recognizes Toyota for having the most 5-Star rated vehicles

Then again, this is not the first time the two brands have produced rebadged models. To name a few, the Toyota Wigo, the Avanza, and the Rush all have Daihatsu counterparts in Indonesia, named as Ayla, the Xenia, and the Terios. Looking back, the Daihatsu Altis had been a rebadged Camry since the late 90s to early 2000s. Now, the midsize sedan is in the form of the 8th-generation Toyota Camry with a recent refresh. Starting with the exterior, it retains a familiar skin, except for the alloy wheel options per trim, which might differ with the Toyota. Its other key distinction is the ‘D’ badge. Inside, the Daihatsu Altis still features a familiar layout. What we’re not sure, though, is if it comes with other cabin color variants. Then again, it gets some of the essentials you’d expect on a midsize sedan, including leather-upholstered seats, an automatic climate control, and a large floating-type infotainment system which is also made available on the refreshed Toyota Camry. 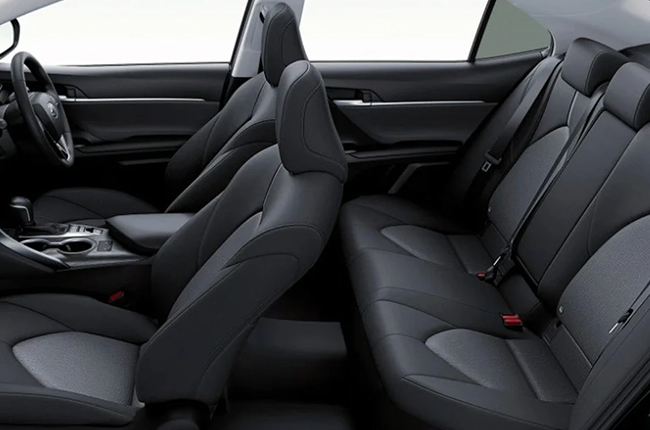 As mentioned above, safety features of the Daihatsu Altis have been significantly improved for this refreshed version, as it comes with a high-tech safety kit, the Intelligent Clearance Sonar (ICS). The ICS constantly monitors both the front and rear of the vehicle. When the system detects something, it then automatically engages to avoid accidental collision. Other safety features of the refreshed Daihatsu Altis include pedestrian detection, active cruise control, lane departure warning, rear cross-traffic alert, and blind-spot monitoring.

Under the hood is a new hybrid powertrain that combines a 2.5-liter gasoline engine with an electric motor. The gasoline motor is able to churn out a healthy 176 hp and 221 Nm of torque, while the paired electric motor puts out an additional 118 hp and 220 Nm of torque.

It’s quite impossible for the Daihatsu Altis to be sold here (for now), given that we already have the Toyota Camry. Though it is still worth noting that the locally-specced model does miss out on some of those safety features, as well as on the advanced Hybrid powertrain the Daihatsu Altis has. But we can expect some notable upgrades on the Camry once its refreshed version makes its way to the Philippines.