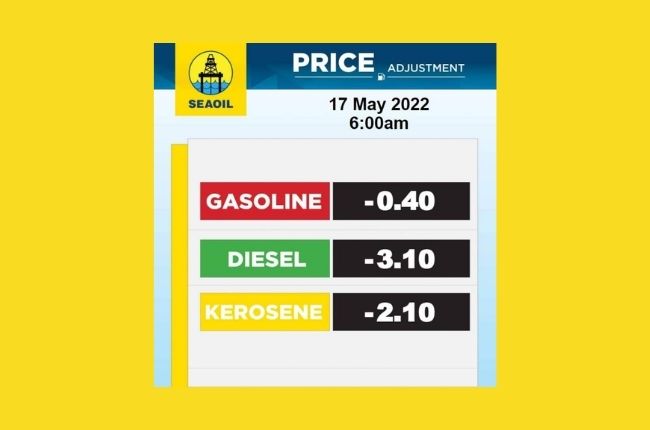 The price of gasoline, diesel, and kerosene are all set to go down on Tuesday, May 17, 2022. The news comes as local oil firms including Pilipinas Shell, Seaoil, PetroGazz, and CleanFuel announced separate advisories indicating the rollback.

Owners of diesel vehicles will see the most benefit as the price per liter will go down by P3.10. Meanwhile, the price of gasoline will see a measly decrease of only P0.40 per liter. Kerosene will also go down by P2.10 per liter.

Pilipinas Shell, Seaoil, and PetroGrazz are set to implement the changes by 6 AM on Tuesday, while CleanFuel will make the same change by 8:01 AM on the same day. This will be only the fifth fuel price rollback of 2022 after what has been a tumultuous year for the global oil industry. Conversely, the Philippines has experienced 15 fuel price hikes since the beginning of the year. Prices have since reached record highs with no clear end in sight.

The high cost of fuel in recent months has much to do with the conflict in Eastern Europe, with the European Union (EU) struggling to agree on sanctions against Russian oil. To that end, global supply of crude oil has been strained. This issue has contributed to the week-to-week fuel price fluctuations experienced by many countries around the world, including the Philippines.

With the price of diesel going down by over P3 tomorrow many motorists are hoping for the rollbacks to continue and for prices to stabilize in the coming weeks. Gasoline users will have to hold fast, as the minuscule P0.40 per liter decrease is not nearly enough to offset the fuel price hike enacted last week. For now, the motoring public will have to watch the developments unfold in the next few days and into the following weeks.