Vettel and Raikkonen started the race in 1st and 2nd, respectively; while Bottas was in 3rd. However, the Mercedes-AMG Petronas driver had a better start and took the lead before turn 2. This would be their positions until Bottas dove into the pits for a new set of tires on lap 27. Scuderia Ferrari decided to keep Vettel out until the 34th lap to widen the gap enough for a tire change. Unfortunately, the Italian racing team’s botched pit stop caused them the lead. By the time the German resumed racing, Bottas was already ahead by 4.6 seconds.

With a fresher set of tires, Vettel was able to cut down the gap to less than 1 second and put himself in position to take the lead. Sadly, luck would run out for the German as Williams’ Felipe Massa blocked Vettel, which cost him any chance of winning. Raikkonen came in 3rd, 11 seconds behind his teammate. Meanwhile, Lewis Hamilton of Mercedes-AMG Petronas was able to manage engine temperature throughout the race and finish 4th. The sole finisher of Red Bull Racing Max Verstappen crossed the line in 5th.

Force India’s Sergio Perez reached the chequered flag in 6th. He was then followed by his teammate Esteban Ocon in 7th, the highest of his young F1 career. Renault’s Nico Hulkenburg, who ran 40 laps on ultrasoft tires, finished in 8th. On the other hand, Massa ended up in 9th after a slow tire puncture.

Despite being handed down a 3 place grid penalty for his collision with Lance Stroll last race, Carlos Sainz of Toro Rosso rounded up the top 10.

Williams’ rookie Stroll finally finished a race in 11th, who was followed by the Russian Daniil Kvyat of Toro Rosso at 12th place. Kevin Magnussen of Haas F1 and Stoffel Vandoorne of McLaren-Honda ended up in 13th and 14th, respectively, after being handed with a 5 second penalty each for track limit violations. Sauber’s Marcus Ericsson came in 15th while his teammate Pascal Wehrlein finished last in 16th.

Only 4 drivers failed to complete the race headed by McLaren-Honda’s Fernando Alonso. The Spaniard reported that his car was “losing charge” and stopped at the penultimate corner of the track during the formation lap.

Renault’s Jolyon Palmer and Romain Grosjean also retired after a spectacular crash on the opening lap, causing the safety car to come out. As the race resumed, Daniel Ricciardo of Red Bull Racing had to retire due to rear brake problems. 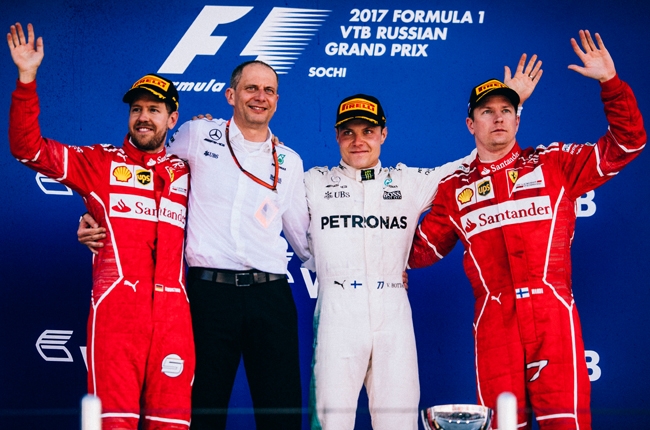 After the Russian GP, Vettel has extended his lead in the driver's championship over Hamilton – 86 to 73. Meanwhile, Bottas is just 10 points behind his teammate with 63. On the other hand, Mercedes-AMG Petronas leads Ferrari by 1 point, 136 to 135. The next race of the 2017 Formula 1 season will be on May 14 at Barcelona, Spain.