Ford Europe introduces a new Special Edition Ford Ranger Raptor to its lineup. The new model will be built in limited numbers to ensure exclusivity and will come with additional styling accents to both the interior and exterior of the vehicle. Aside from these minor upgrades, the Ranger Raptor will still retain the same features that many have come to love about it.

The new limited-edition model was introduced to the world via a Spaghetti Western-style video which showcased the Ranger Raptor’s newly enhanced style along with its high-speed capability on appropriate off-road scenarios. Alongside the special-edition model, the other special edition Ranger models were also showcased such as the Wolftrak and Stormtrak models along with the rally-inspired Ranger MS-RT.

Related: Will the Philippines get the Ford Ranger Stormtrak and the Wolftrak?

Muenzing continues by stating “Starring in its own Spaghetti Western movie is the perfect way to demonstrate Ranger Raptor Special Edition’s style and off-road capability.”

What’s new with the special edition? 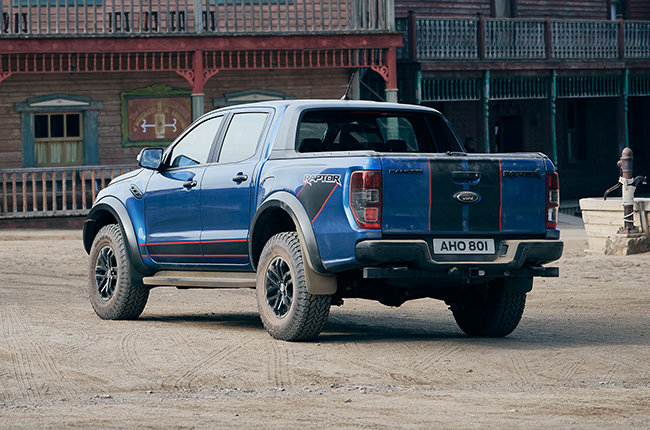 Mechanically speaking, the Ford Ranger Raptor special edition remains the same as the standard model. It does, however, come with add-ons such as twin matte black racing stripes that are edged with red contrast lines located on the hood, roof, rear wings, tailgate, and lower body sides of the vehicle. Ford says that these new styling additions bring further emphasis to the high-performance character of the pickup truck. The vehicle itself looks similar to that of another special edition model the Ranger Raptor X that will soon make its debut in Australia and New Zealand, however, it ditches the rear bed bar in favor of a more subdued look.

Related: Could Ford Philippines give the Ranger Raptor this kind of makeover? Aside from the stripes, the special edition Raptor also comes with front two hooks that are finished in red along with other matte black exterior accents such as for the wheel arches, bumpers, door handles, and the pickup’s signature grille. The automaker states that these minor enhancements help give the vehicle an even more imposing appearance than the Raptor’s standard grey exterior accents. The inside also gets a few minor accent tweaks in the form of red accent stitching on the door cards, instrument panel, and steering wheel. Aside from this the special edition pickup truck also gets a Raceway gray instrument panel to further separate it from the standard model.

Unfortunately, the special edition model is only available for the European market and will likely not go on sale anywhere else. The new models are set to hit showroom floors in Europe in October 2021.