Honda has unveiled an artificial intelligence-powered driver-assist technology aimed at preventing traffic collisions and reducing accidents. The new venture, called Advanced Future Safety Technologies, puts Honda in a unique position as the first automaker in the world to reveal an AI-driven safety system.

Honda says its goal is to achieve "zero traffic collision fatalities involving Honda motorcycles and automobiles globally by 2050." Fresh off the local release of the new Civic, the Japanese car and motorcycle manufacturer reportedly aims to do this with two crucial technologies.

The first of these is an AI-powered "Intelligent Driver-Assistive Technology" that adapts to the ability and situation of each driver to reduce critical driving errors and mitigate risks. The second is the "Safe and Sound Network Technology," intended to connect people and mobility products through telecommunications networks

When combined, the two technologies work to enhance the collision and accident-avoidance capabilities of future Honda vehicles. According to Honda, it is deeply committed to advancing safety tech from a hardware and software perspective.

Honda will also be expanding its latest SENSING 360 technology to all models in major markets by 2030. It's even looking at adding a motorcycle detection feature to augment its advanced driver-assistance system (ADAS).

Related: Things you need to know about self-driving cars 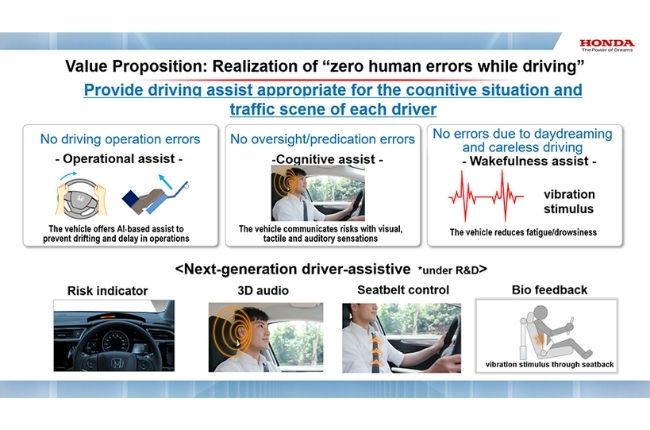 By 2030, Honda wants to halve global traffic collision fatalities involving its motorcycles and cars. Then, 20 years later, in 2050, it plans to eliminate collision-related deaths in all Honda vehicles.

Honda is also developing autonomous vehicle technology, which could eventually combine with its AI systems to bring a new level of safety to the market. Back in September, the company announced the start of road testing for its self-driving prototype cars.

The vehicles commenced trials at Utsunomiya City and Haga Town in Tochigi Prefecture, Japan. It has plans to develop the technology for Mobility-as-a-Service (MaaS) functions, similar to GrabCar or Uber, except with autonomous cars. There is no timeline for the launch of this service, but with Honda ahead of the curve with AI and other safety technologies, it could only be a matter of time before we see it.