In a recent interview with the president of Kia Philippines following the launch of the Kia Stinger, Manny Aligada confirmed that Kia is dropping the Soul from its lineup to bring us a better crossover that presents more value-for-money.

In late May, Kia in the rest of the world has previewed its latest small crossover in sketches of the outside and interior. Based on the Hyundai Venue, it’s a small subcompact crossover that will undoubtedly cater to the younger generation of buyers. One thing that did not accompany the sketches however, was the name of the car. While it was rumored to be called the “Tusker,” Kia quashed all notions, and named the new vehicle the “Seltos”.

The name of the newest crossover is the Seltos. It appears a few of these vehicles are out in the wild on foreign soil. None yet have been seen gracing Philippine soil yet however. This leads us to speculating if the next big – small crossover to replace the quirky Soul of Kia, could likely be the Seltos.

Kia says that it will be a global platform that will bring sophistication and assertiveness to the market. The name however is a bit of an oddity, but Kia says that its name is inspired by Greek Mythology: The Legend of “Celtos”, the son of Hercules. The ‘C’ is swapped out for an ‘S’ to imply speed and sportiness. 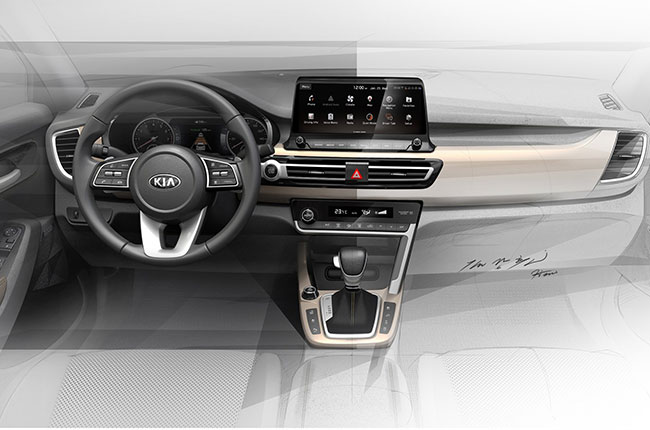 As seen in the sketches, the car sports a front facia that looks sharp. A long hood and strong character line accompanies this crossover’s modern design. The robust shoulder line also is highly stylized which matches the glass work of Kia in the back that tapers to a more angled point on the rear. Extra gravitas to the design is added by Kia because the rear bumper and metallic exhaust tip finishers add to the sportiness that the model wants to convey.

If the exterior hasn’t shouted youthful, the interior probably will. This crossover will be laden with the latest and greatest that the Korean brand has to offer in terms of technology. A 10.25-inch touch screen infotainment screen is nestled nicely in the center. Mood lighting as well will set the tone for the journey as it dances to the beat of your favorite songs.

The Kia Seltos crossover will be revealed later this month. Sales of the new nameplate will happen in the second half of 2019.