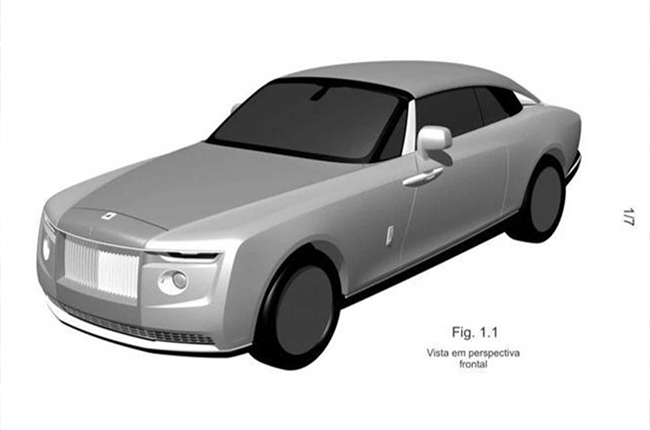 Patent images of a potential Rolls-Royce model were leaked online. The following photos reveal a coupe, and those alleged images were first uploaded by a Spanish enthusiast forum Coches Spias and were then released by Brazil's patent authority. Upon examining the images, the vehicle somewhat looks like a fancy land yacht, which is not a bad thing at all, as it exhibits a cutting-edge design that’s synonymous with the rest of the brand’s model lineup. The coupe sports a number of familiar design cues by the company, it’s added with a touch of class complemented by the suicide doors. As for the front, it sports an upright grille accentuated with thin LEDs positioned above those round headlights. What’s really a standout are the flying buttresses stretched over to the blacked-out b-pillars, which definitely completes the overall coupe look.

Other sources say that the model shown on the image might just be based on the only coupe in the Rolls-Royce range, the Wraith. That said, the unnamed model should run with the same 6.6-liter V12 engine, producing a mighty 624 hp. While power will be sent to rear wheels, transmission-wise, the coupe will probably be paired with an 8-speed automatic. Like all Rolls-Royce models, it should also come with a sleek and luxurious interior that’s blessed with fine craftsmanship and top-notch features.

The brand has been known to produce vehicles with such esteemed touch of class and superb performance, and by that, this upcoming coupe should not be an exemption. Then again, all those statements remain speculative for now. This is perhaps a top-secret project by the brand, as there are indeed no official statements released by Rolls-Royce. Time should pass, and by then, we might just grasp some juicy updates with this unnamed beauty.