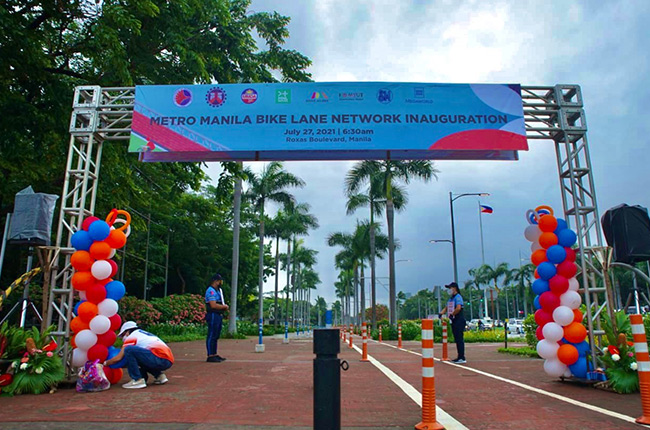 Here is some good news to all cyclists, the Department of Transportation (DOTr) finally opened the Metro Manila Bike Lane Network last July 27, 2021. This P801.83-million project was co-developed with the Department of Public Works and Highways (DPWH). Spanning about 313 km, this bike lane network stretches across 9 major road sections and 12 cities.

Just last month, the 497-km bike lane network in Metro Manila, Metro Davao, and Metro Cebu was completed last month. Now, the recently accomplished project shall entice more locals to use their bicycles and explore the rest of Metro Manila. According to officials, the development of bike lanes aims to increase accessibility to key activity areas and fundamental facilities, lessen carbon emission, and promote better road safety among cyclists.

The idea has been floating for quite some time, and now, it has turned into reality. Metropolitan Manila Development Authority (MMDA) chairman Benhur Abalos calls these lanes a ‘game changer’ alongside the Carousel bus lane, the lane dieting, as well as other measures to improve intersections on EDSA. Plans have proceeded all thanks to the Republic Act 11494, colloquially known as 'Bayanihan 2'. This addresses the intent of recovering from the pandemic through promoting other alternative means of transportation.

Today marks the end of the long wait of cyclists for safe and quality bike lanes here in Metro Manila because we are formally inaugurating the third leg of the completed 497 kilometers of bike lane networks established in key major cities in the country.
Sec. Arthur Tugade
DOTr Secretary